photo by Göztepe SK: Adis takes a shot against Hatayspor

Albania, Kategoria Superiore, Kastrioti – Kukësi 0:3
Agim Ibraimi served another game as a captain for the visitors and played the full game in their 0:3 victory over Kastrioti.

Albania, Kategoria Superiore, Partizani – Bylis 3:0
Egzon Belica played another full match for Partizani while Ferhan Hasani joined him on the field in the 71st minute. Meanwhile, Borjan Panchevski did not make the bench for Bylis.

Albania, Kategoria Superiore, Skënderbeu – Tirana 0:0
Filip Najdovski and Kristijan Toshevski played the entire game as part of Tirana’s defence while Bekim Redjepi was once again the backup goalie by the hosts.

Albania, Kategoria Superiore, Apolonia – Teuta 0:2
Bobi Celeski spent another game on Teuta’s bench as a reserve goalkeeper, while Blagoja Todorovski played 90 minutes in the away win against Apolonia.

Azerbaijan, Premyer Liqası, Sabah – Səbail 0:0
Milovan Petrovikj made the start against Sabah but he suffered an injury during the first halftime and had to be substituted in the 34th minute. His teammate Florijan Kadriu on the other hand did not get any playing time as he remained an unused substitute.

Bulgaria, Parva Liga, Botev Vratsa – Botev Plovdiv 1:2
Mite Cikarski was the man of decision in the game against Botev Vratsa as he assisted the first and scored the winning second goal for the visitors from Plovdiv. He went on to play for 87 minutes, while his teammate Mario Mladenovski did not make the matchday squad for this round. For the hosts, Dorian Babunski played the last half our of the match.

Bulgaria, Parva Liga, Slavia – CSKA 1948 1:3
Filip Antovski played the full 90 minutes for the hosts and picked up a yellow card, while Darko Tasevski joined him on the field by entering from the bench in the 77th minute.

Croatia, Hrvatski Telekom Prva Liga, Istra – Hajduk 0:1
Jani Atanasov remained an unused substitute for the visitors in their minimal win against Istra. Interestingly, Hajduk did not make a single substitution in this match and finished the game with the same 11 players that started.

Croatia, Hrvatski Telekom Prva Liga, Lokomotiva – Dinamo 0:2
Arijan Ademi made the start for Dinamo but he had to be substituted in the 57th minute after he picked up a very concerning injury. It remains to be seen how long Arijan will need to be sidelined, but luckily the first test results show that the injury is not as severe as it originally seemed to be. His teammate Stefan Ristovski remained an unused substitute in this round, while Edis Malikji did not get summoned by the hosts. 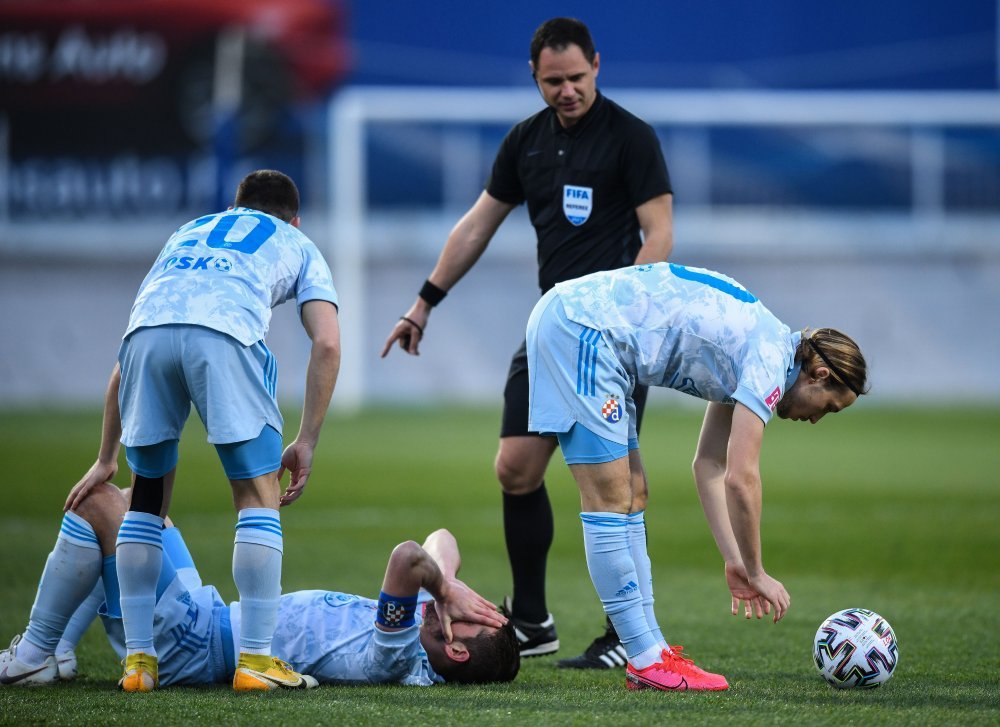 Croatia, Hrvatski Telekom Prva Liga, Šibenik – Rijeka 0:1
Todor Todoroski made a late substitution for the hosts as he entered the field in the 86th minute, while Darko Velkovski remained on the bench for Rijeka.

Cyprus, Protáthlima Cyta, Doxa – Nea Salamis 0:0
Damjan Shishkovski was the starting keeper for Doxa and managed to keep clean sheet, while Dushko Trajchevski and Darko Glishikj both started on the bench and were introduced in 70th and 90th minute respectively.

Cyprus, Protáthlima Cyta, APOEL – Enosis 1:0
Filip Gachevski played the whole match for the away side.

England, Premier League, Manchester City – Leeds United 1:2
Ezgjan Alioski played the whole match for the away team and was part of this surprising away win. Leeds played the whole second half with a player less and still managed to grab the win. Alioski provided the assist for the game-winning goal with a great through pass you can watch below.

France, Ligue 2, Valenciennes – Chambly 2:1
Vlatko Stojanovski was not part of this match.

Germany, Bundesliga, Stuttgart – Borussia Dortmund 2:3
Darko Churlinov played the final 4 minutes of the match as he was brought on in the 86th minute to replace Marc-Oliver Kempf.

Greece, Soúper Ligk, Atromitos – AEL 0:1
Nikola Jakimovski started the match and played 64 minutes before he was taken off. He was shown a yellow card in the 51st minute. Prior to that, he contributed to the game winning goal by crossing a ball in the box which bounced couple of times before it ended into the net.

Italy, Serie A, Juventus – Genoa 3:1
Goran Pandev was in Genoa’s starting lineup and was replaced by Shomurodov in the 63rd minute.

Italy, Serie A, Sampdoria – Napoli 0:2
Elif Elmas replaced Insigne in the last minute of the match.

Italy, Serie A, Udinese – Torino 0:1
Ilija Nestorovski entered the match in the 86th minute but wasn’t able to help his team avoid the defeat.

Italy, Serie B, Lecce – Spal 1:2
Both Boban Nikolov and Leonard Zhuta were on Lecce’s substitute bench. Nikolov entered the match in the 62nd minute and later earned a yellow card, while Zhuta didn’t get the chance to play.

Kazakhstan, Premer Ligasy, Zhetysu – Tobol 0:2
Aleksa Amanovikj was in Tobol’s starting lineup and scored the opening goal in the 25th minute of the match. This was the defender’s first goal for Tobol.

Romania, Liga I Betano, Voluntari – Botoșani 1:1
Stefan Ashkovski entered the match after only 10 minutes of play and in the 20th minute scored a nice goal from the left side of the box. Viktor Angelov played the second half for the home team.

Romania, Liga I Betano, Viitorul – Gaz Metan 0:2
David Babunski was in Viitorul’s starting lineup and played until the 61st minute when Aurelian Chitu took his place. His team was already 0:2 down.

Russia, Premier Liga, Khimki – Tambov 1:0
David Toshevski is still out of Tambov’s squad because of injury.

Serbia, Linglong Tire SuperLiga, Radnik – Metalac 1:2
Both Nikola Bogdanovski and Zoran Danoski featured the entire 90 minutes for the hosts with the first being booked in the 48th minute.

Slovakia, Fortuna Liga, Senica – Ružomberok 0:1
Tihomir Kostadinov played almost the whole game for the visitors as he was replaced in the 1st minute of stoppage time.

Slovakia, Fortuna Liga, Spartak Trnava – ViOn Zlaté Moravce-Vrable 3:0
Milan Ristovski started at CF and played the entire game. In the 90th minute Milan provided the assist for Spartak’s last goal. For the visitors Tomche Grozdanovski was all minutes on the field and was also booked with a yellow card in the 86th minute.

Slovakia, Fortuna Liga, Trenčín – Žilina 2:3
Enis Fazlagikj started in DM for the visitors and played 74 minutes. In the 16th minute he also received a yellow card.

Spain, Segunda División, Rayo Vallecano – Girona 2:1
Stole Dimitrievski was between the posts for Rayo and conceded one goal in the win against Girona.

Spain, Segunda División, Mallorca – Lugo 2:0
Mallorca won against Lugo and is on the way to promotion to the Primeria, but Aleksandar Trajkovski watched the game just from the bench.

Sweden, Allsvenskan, Norrköping – Sirius 1:1
David Mitov Nilsson was Sirius’ starting goalkeeper and conceded one goal in the draw away to his former team Norrköping.

Sweden, Allsvenskan, Mjällby – Varbergs BoIS 0:0
Daniel Krezikj missed this game for Varbergs as he is still recovering from the long-term knee injury.

Turkey, Süper Lig, Kayserispor – Antalyaspor 0:1
Daniel Avramovski opened in central midfield for the hosts and lasted 72 minutes on the pitch.

Turkey, Süper Lig, Sivasspor – Konyaspor 3:1
Erdon Daci made a late substitute appearance for Konyaspor as he was introduced in the 83rd minute.

All goals & assists by Pandev for Macedonia:

"They must assert themselves and play in their clubs, we are powerless here, they must decide for themselves. The form is built in the clubs, not in the national team." https://twitter.com/MacedonianFoot_/status/1574512769071734805