Boban Nikolov netted two goals in Hungary, Ivan Trichkovski added one in Cyprus and also collected one assist, while Boban Georgiev, Tihomir Kostadinov, Adis Jahovic and Mirko Ivanovski had one assist apiece for their respective teams.

Albania, Kategoria Superiore, Kukësi – Tirana 2:1
Tome Kitanovski and Edis Malikji were both starters for the hosts. Tome began at left-back, while Edis was on the other side of the defense. Eventually their team gained a narrow win against Tirana.

Albania, Kategoria Superiore, Skënderbeu – Teuta 1:0
Artim Polozhani opened as a central back for the hosts and helped his team to keep a clean sheet, while for Teuta Blagoja Todorovski played at right-back. His teammate Bobi Celeski spent the entire match on the bench as the reserve goalie.

Bosnia-Herzegovina, BH Telecom Premijer Liga, Tuzla City – Sarajevo 2:1
Krste Velkoski opened in attack for Sarajevo and lasted 65 minutes on the pitch as his team suffered a loss on the road.

Bulgaria, Parva Liga, Slavia – Levski 0:2
Darko Tasevski opened on Slavia’s bench and played from the 66th minute as his team lost against Levski.

Croatia, Hrvatski Telekom Prva Liga, Istra – Rijeka 0:3
Agron Rufati was an unused substitute for Istra, while Darko Velkovski wasn’t called up by Rijeka because of injury.

Cyprus, Protáthlima Cyta, Olympiakos – AEK 2:2
Daniel Mojsov did not feature for the away team, while Ivan Trichkovski played 90 minutes before he was taken off and successfully converted a penalty. He also took part in the first goal as he fired a shot from a free-kick which was partially blocked by the keeper and then fell to Cases who scored the opening goal.

Cyprus, Protáthlima Cyta, AEL – Doxa 1:0
Davor Zdravkovski played the whole match for the winning side, while Kire Markoski remained on the bench. Dushko Trajchevski in the opposing side played 83 minutes before he was taken off.

Cyprus, Protáthlima Cyta, Enosis – APOEL 2:3
Risto Mitrevski started for Enosis but was replaced after 30 minutes. This was a tough loss for his team as they had a 2:1-lead until the stoppage time, but conceded two late goals and lost at home.

Cyprus, Protáthlima Cyta, Ethnikos – Nea Salamis 2:0
The trio of Macedonians in Ethnikos Martin Bogatinov, Bojan Markoski and Jovan Kostovski all played the whole match for their side.

Kostovski (2nd from left) during the game; photo by: politis.com.cy

England, Championship, Leeds United – Derby 1:1
Ezgjan Alioski played the whole match for the hosts in which they dropped points in the injury time. This was Ezgjan’s 100th appearance for Leeds. 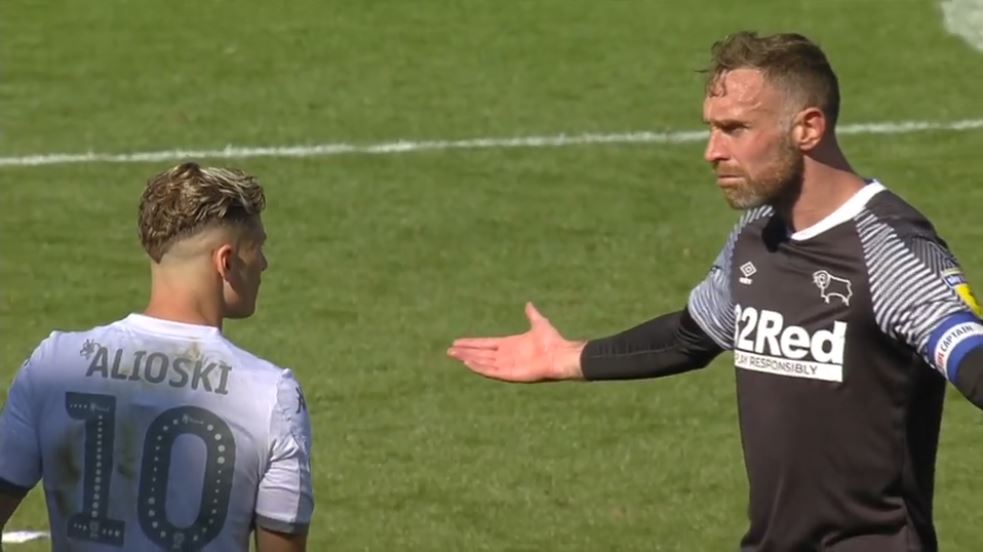 Alioski exchanges words with Richard Keogh after the match

Finland, Veikkausliiga, KPV – Rovaniemi 4:1
Filip Ivanovski was not part of the match day squad for the hosts.

Hungary, Magyar Kupa, Erdi – Diósgyör 0:1
Mirko Ivanovski was brought on in the 66th minute and he provided the assist to the game-winning goal thanks to which his team advanced.

Hungary, Magyar Kupa, Hatvan – Újpest 0:2
Kire Ristevski played the whole match for the visiting team as they continue into the next stage.

Hungary, Magyar Kupa, Eger – Fehérvár 2:4
Both Visar Musliu and Boban Nikolov played the whole match for the away team. Nikolov scored a brace in his team’s win and advances into the next phase.

Italy, Serie A, Cagliari – Genoa 3:1
Goran Pandev replaced Ricardo Saponara in the 74th minute, but was unable to help Genoa avoid the defeat away to Cagliari. However he did play a part in the lone Genoa goal in the 83rd minute. He made a pass to Sanabria who then passed it to Kouamé for the goal.

Italy, Serie A, Lecce – Napoli 1:4
Elif Elmas was in the starting lineup for Napoli for the second time this season. He played another good match and was replaced in the 74th minute after his team already had the 1:3 lead. Elmas earned a yellow card at the end of the first half.

Italy, Serie A, Udinese – Brescia 0:1
Ilija Nestorovski replaced Sema in the 85th minute, but it was too late to help his team avoid the defeat.

Romania, Liga I Betano, Botoșani – Chindia 0:3
Stefan Ashkovski was in the starting lineup for Botoșani, but was replaced at the start of the second half.

Serbia, Linglong Tire SuperLiga, Rad – Radnik 0:1
Ostoja Stjepanovic was in the starting lineup for Rad and played until the 73rd minute. On the other side, Zoran Danoski played the whole match for Radnik, while Boban Georgiev entered the match in the 66th minute and only two minutes later he assisted for the winning goal.

Serbia, Linglong Tire SuperLiga, Spartak – Javor 1:0
Aleksa Amanovikj was in the starting lineup and played the whole match for Javor.

Serbia, Linglong Tire SuperLiga, Vojvodina – Voždovac 1:2
Marko Gjorgjievski entered the match in the 58th minute and helped his team win away to Vojvodina.

Slovakia, Fortuna Liga, Dunajská Streda – Ružomberok 0:1
Tihomir Kostadinov played whole game for Ružomberok and he provided the assist to Alexander Mojžiš in the 44th minute for the only goal at the game.

Slovakia, Fortuna Liga, Sereď – ViOn 0:0
Dejan Iliev was Sereď’s starting goalkeeper and he kept a clean sheet at this game while Tomche Grozdanovski was unused substitute for ViOn.

Slovenia, Prva Liga, Olimpija – Bravo 3:1
Besart Abdurahimi played till 76th minute for Bravo when he was substituted by Milan Djajić.

Spain, Primera División, Levante – Eibar 0:0
Enis Bardhi watched the game from the home team’s bench. On Monday he picked up a grade one muscle in training and could be out for up to 3 weeks.

Spain, Segunda División, Rayo Vallecano – Almería 1:1
Stole Dimitrievski continues to be Rayo’s reserve goalkeeper. all over the internet the Rayo fans are getting mad at manager Paco Jémez who keeps fielding a 35-year-old veteran instead of Stole.

Sweden, Allsvenskan, Sundsvall – Djurgården 1:4
David Mitov Nilsson spent the whole game between Sundswall’s posts and he conceded fourth goals in his team’s home defeat. He was also shown a yellow card in the 9th minute of the game.

Turkey, Süper Lig, Malatyaspor – Galatasaray 1:1
Adis Jahovic played full game for Malatyaspor. He provided an assist to Brazilian international Guilherme for his team equalizer in the 89th minute of the game.

Turkey, 1.Lig, Adana Demirspor – Bursaspor 4:1
Jani Atanasov started in midfield for Bursaspor and he was substituted at the halftime by Özer Hurmaci.

Ukraine, Prem’yer-liha, Lviv – Olimpik 0:1
Demir Imeri played until the 69th minute for Olimpik when Gennadiy Pasich took his place. Imeri was also booked at 66th minute of the match.

Ilija Nestorovski before Daniele Rugani as his Udinese got eliminated by Juve from the Coppa Italia; photo: Daniele Buffa/Image Sport

The biggest concern is CB Darko Velkovski. He got injured again, this time during the winter preparations, for Rijeka

Stefan Spirovski got himself a brace today for Hapoel Tel Aviv as they comfortably beat Hapoel Raanana 3-1.

Spirovski's first goal was the pick of the bunch on the night. A lovely long range effort into the top corner leaving the keeper rooted to the spot (See below 👇).