Krste Velkoski and Agim Ibraimi assisted as many teams featuring Macedonian footballers advanced in the next round of the Europa League and the Champions League. Most interesting was the match between the teams of Alen Jasharoski and Enis Saiti as it took penalty kick to decide the winner. Some players will face well known clubs in the next round: Velkoski will play against Fiorentina, Medjit Neziri against Bordeaux, while Viktor Angelov against Sevilla.

Dudelange 2:1 (3:2 agg.)
Boban Nikolov again started on the bench and entered the pitch in the 63rd minute taking the place of Szabolcs Huszti. His team was already leading 2:1 at the time. Nikolov will face Bulgarian champion Ludogorets in the second round.

Kukësi 1:1 (1:1 agg.)
Edis Malikji was an unused sub for Kukësi. His team advanced thanks to the away goal rule and will play against Azeri side Qarabağ in the next round.

Olimpija 0:0 (1:0 agg.)
Daniel Avramovski played the whole match for the Slovenian champions who failed to advance.

Banants 3:0 (5:1 agg.)
Krste Velkoski once again captained his team for the whole 90 minutes. He assisted to Nihad Mujakić for the opening goal in the 31st minute when he took a corner kick. Velkoski will now have the honor to play against Serie A side Fiorentina.

Fola 0:0, 4:5 p.s.o. (0:0 agg.)
Alen Jasharoski this time started up front for Prishtina and was taken off in the 3rd minute of the extra time when Arbër Hoxha came in. For the visitors, Enis Saiti also started and was substituted in the 72nd minute for Luxembourgian national team attacker Stefano Bensi. At the end, it is Saiti who advanced as his Fola celebrated after 8 series of penalties. In the next round they will face Genk.

Ventspils 3:3 (3:8 agg.)
Medjit Neziri played the entire 90 minute for the Latvian team who will match Bordeaux in the next round.

Partizani 2:0 (3:0 agg.)
Besart Abdurahimi stepped in for Jürgen Bardhi in the 56th minute, while Egzon Belica remained on the bench. Their team got eliminated.

Lahti 0:0 (3:0 agg.)
After conceding three goals in the first leg, keeper Damjan Shishkovski was benched for this return leg.

Neftçi 4:0 (5:3 agg.)
Viktor Angelov watched from the bench as his teammates managed to over turn the aggregate result in their favor. Now Újpest will play against Spanish giant Sevilla.

Široki Brijeg 1:1 (3:3 agg.)
Agim Ibraimi beautifully assisted to Dario Melnjak early in the 11th minute to break the dead lock. Later he got substituted by Žan Žužek in the 80th minute after the visitors had equalized. His teammate Zeni Husmani played the whole match. Domžale advanced on the away goal rule and will face Russian side Ufa in the next round.

Radnički Niš 0:1 (0:4 agg.)
Aleksandar Todorovski played the whole game for Radnički who will face Maccabi Tel-Aviv in the next round.

2007 Gran Pandev brings the lead to Lazio in the Champions League against Olympiakos, but later the Greeks turn the result around. 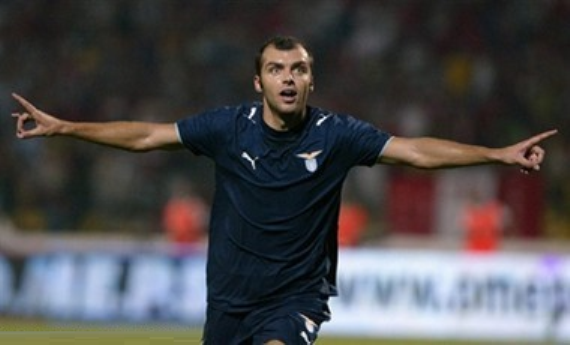