photo by m4sport.hu: Bojan Miovski (#30) fights for the ball

Albania, Kategoria Superiore, Teuta – Kastrioti 1:1
Blagoja Todorovski started at RB for Teuta and played 79 minutes, while his teammate Bobi Celeski was on the bench as the reserve goalkeeper.

Albania, Kategoria Superiore, Kukësi – Apolonia 1:0
Agim Ibraimi began on the right wing for the hosts and lasted the entire match on the pitch.

Albania, Kategoria Superiore, Vllaznia – Bylis 1:0
Mevlan Adili, Aleksandar Isaevski and Demir Imeri were starters for Vllaznia. The first two mentioned played all minutes, while Demir played 66 minutes. It was Demir who provided the assist for the game winner when his corner was headed home by Imami. Meanwhile, goalie Borjan Panchevski wasn’t part of Bylis’ squad.

Albania, Kategoria Superiore, Tirana – Partizani 0:0
RB Kristijan Toshevski and CB Filip Najdovski were both starters for Tirana and helped their team to keep a clean sheet. Kristijan played 75 minutes, while Filip lasted all minutes on the pitch. For the visitors Partizani Egzon Belica was all minutes in central defense, whereas his teammate Besnik Ferati was an unused substitute. 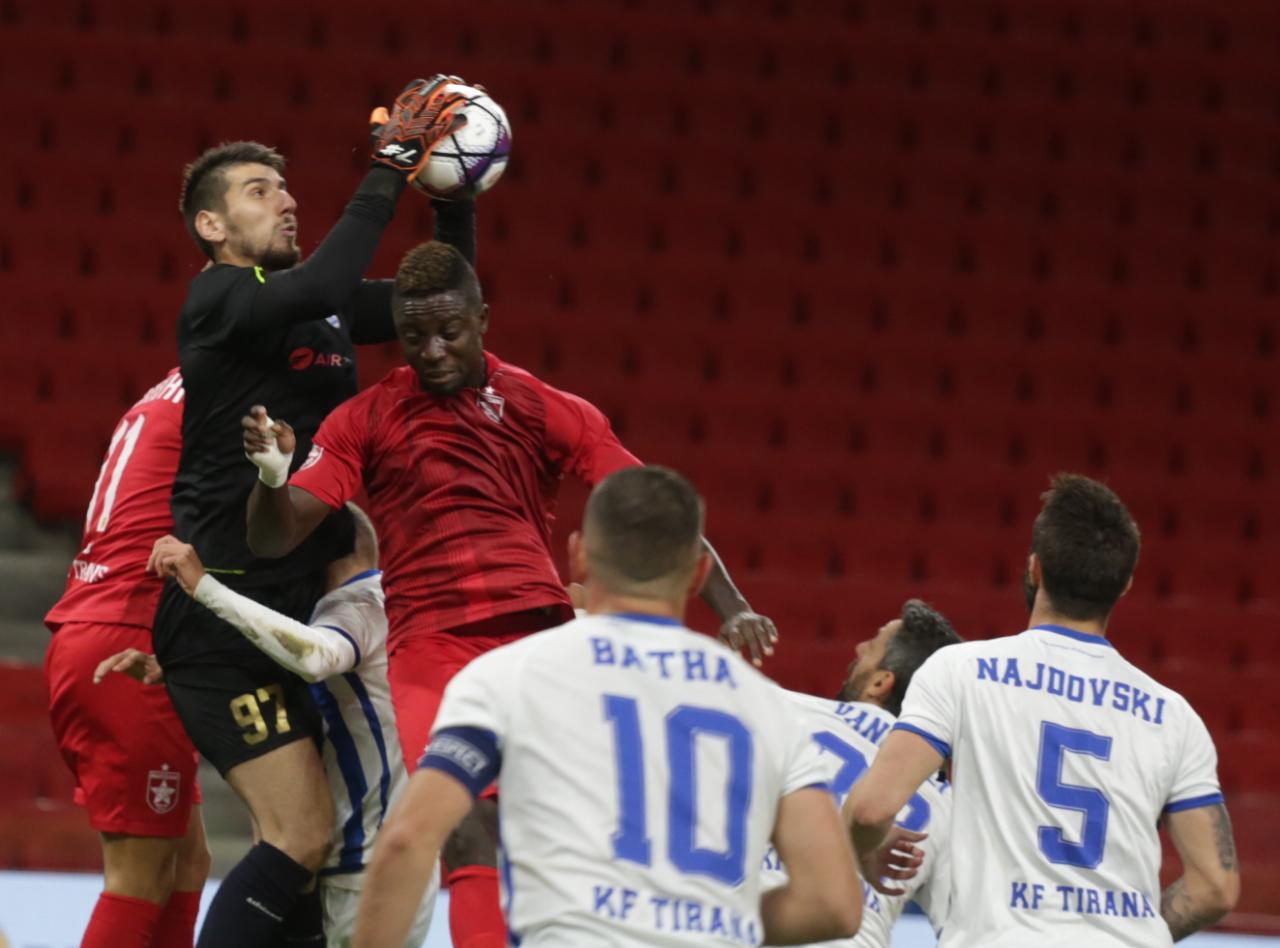 Bosnia-Herzegovina, BH Telecom Premijer Liga, Borac – Sarajevo 2:2
Boban Georgiev made a late substitute appearance for Borac as he was introduced in the 89th minute, while Krste Velkoski started for Sarajevo and played 74 minutes.

Bulgaria, Parva Liga, Cherno More – Etar 0:1
Vlatko Drobarov was all minutes in central defense as his team lost against Etar. 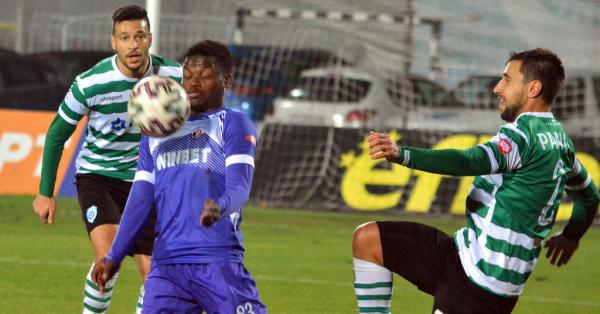 Vlatko Drobarov (L) focused in the game against Etar; photo by chernomore.bg

Bulgaria, Parva Liga, Slavia – Ludogorec 0:2
Filip Antovski continued to be a starter for Slavia and played the whole match, whereas his teammate Darko Tasevski played the last quarter hour. Eventually their team lost against Ludogorec.

Croatia, Hrvatski Telekom Prva Liga, Hajduk – Rijeka 1:2
Jani Atanasov played the last ten minutes for Hajduk, whereas Darko Velkovski was an unused substitute for Rijeka. Meanwhile, his teammate Milan Ristovski missed the game due to an injury. Milan is expected to return to action after the winter break.

Cyprus, Protáthlima Cyta, AEL – Achnas 5:0
Davor Zdravkovski was in AEL’s starting lineup and was replaced on half time when his team already had a four goal lead. On the other side, Martin Bogatinov conceded five goals, while Jovan Kostovski didn’t return on the pitch after the half time break.

England, Premier League, Chelsea – Leeds United 3:1
Ezgjan Alioski was in Leeds’ starting lineup on Stamford Bridge and his team had excellent start on the match taking the lead in the 4th minute, but Chelsea won at the end with 3:1. Alioski played until the 69th minute when he was replaced with Rodrigo.

France, Ligue 2, Chambly – Valenciennes 1:2
Vlatko Stojanovski is out of Chambly’s squad because of Covid-19.

Germany, 1. Bundesliga, Werder Bremen – Stuttgart 1:2
Darko Churlinov replaced the scorer of Stuttgart’s both goals Wamangituka in the 91st minute of the match.

Hungary, OTP Bank Liga, Paks – Fehérvár 1:0
Both Visar Musliu and Boban Nikolov played the full 90 minutes for the guests, but weren’t able to help their team avoid the defeat.

Hungary, OTP Bank Liga, Honved – MTK 2:2
Bojan Miovski continued his great goalscoring form. This time he scored the first goal for his team in the 51st minute and helped MTK win a point away to Honved. This was Miovski’s 6th goal after 10 played matches and he is the 3rd best scorer in the Hungarian OTP Bank Liga.

Italy, Serie A, Fiorentina – Genoa to be played on Monday at 20:45 CET
Goran Pandev

Italy, Serie A, Crotone – Napoli 0:4
Elif Elmas played only the last 12 minutes of the match replacing Insigne in the 78th minute.

Romania, Liga I Betano, Sepsi – Botoșani 2:2
Stefan Ashkovski entered the match in the 83rd minute, while David Babunski wasn’t included in the away team’s squad.

Serbia, Linglong Tire SuperLiga, Radnik – Proleter 2:0
Both Macedonian internationals, Zoran Danoski and Nikola Bogdanovski, were starters for Radnik. Zoran played 80 minutes on the left wing, Nikola 58 on the right wing. In the 54th minute it was Bogdanovski who opened the score after an assist from Danoski, while 6 minutes later Danoski also provided the assist for the second goal.

Slovakia, Fortuna Liga, Sereď – Spartak 2:6
Midfielder Filip Duranski played the second half for the hosts as his team was demolished at home by Spartak. The result was already 0:4 at half-time before Filip got game-time.

Slovakia, Fortuna Liga, Michalovce – Žilina 1:1
Enis Fazlagikj was a starter for the visitors and played the whole match.

Spain, Segunda División, Rayo Vallecano – Logrones 2:1
Stole Dimitrievski wasn’t called up by Rayo as he is suspended due to a red card from the last game.

Switzerland, Challenge League, Grasshoppers – Kriens 2:0
Captain Nikola Gjorgjev started on Grasshoppers rightwing and played a big role in the win as he provided the assists for both goals. Eventually, Nikola lasted 82 minutes on the pitch.

Turkey, Süper Lig, Atiker Konyaspor – Erzurum 2:0
Erdon Daci started in attack for Konyaspor and lasted 79 minutes on the pitch as his team won against Erzurum.

Turkey, Süper Lig, Antalyaspor – Ankaragücü 1:0
Adis Jahovikj was all minutes at CF for Antalyaspor and netted the loan goal of the game in the 4th minute of stoppage time. Adis scored his goal with a right-footed shot after he was set up nicely by his famous teammate Lukas Podolski.

Turkey, Süper Lig, Göztepe – Kayserispor 1:1
Daniel Avramovski didn’t play for the visitors as he is not registered for league play.