Macedonia opened the 2020 EURO qualifiers with a 3:1 win against Latvia, a match that was even more special as captain Goran Pandev celebrated his 100th appearance in the national colors.

photo by Filip Zdraveski: view at the first half

A small ceremony took place before the kick-off as FFM presented Pandev with a special gift as today he played his 100th match for Macedonia. Goran became only the second player to achieve such an honor as previously Goce Sedloski reached 100 matches nine years ago. Sedloski remained on that number, so on Sunday when Macedonia will take on Slovenia away, Pandev will became the sole most capped Macedonian player ever. 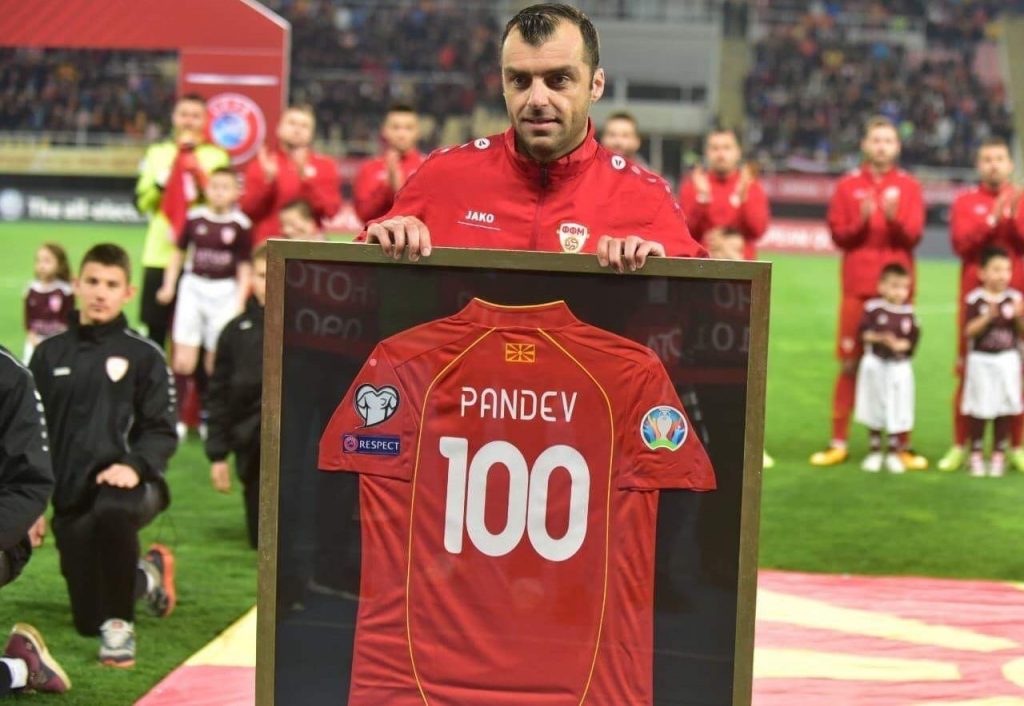 Pandev gets the top and the anthems:

Head coach Angelovski opted for his usual starting eleven as he insisted on an attacking approach just like in the Nations League matches. Latvia at home was a must win match, not just so that the qualifying campaign could be marked by a successful start, but also because the visitors are the weakest side in the group and dropping points in this tie, especially at home, would have been a disastrous start.

Macedonia started dominating right from the start. The first chance came in the 5th minute when Pandev attempt a shot that went wide. The Lynx needed 11 minutes to break the dead lock. Pandev served Alioski on the left whose powerful shot was unstoppable for Vanins.

In the 20th minute Hasani had two chances in just 20 seconds. Both resulted in corner kicks after his close range efforts were blocked. Unfortunately Hasani had to leave the field as earlier picked up an injury. Elmas took his place.

Interesting was the 25th minute corner kick attempt by Bardhi who tried to surprise the visiting keeper but only hit the closer post.

The second goal came after half an hour and again Pandev played the main role. He beautifully served Nestorovski whose shot got deflected by a Latvian defender and Elmas reached the rebound before Vanins. Right after the goal Vanins asked to be substituted due to an injury so reserve keeper Šteinbors came in.

The first real chance for Latvia came in the 54th minute when after a free kick Šabala had a close range shot that was well blocked by Dimitrievski.

Pandev tried a nice shot in the 68th minute but he was denied from scoring by the keeper. Three minutes later Pandev was substituted for Ristevski. Standing ovations from the entire stadium for his 100th match.

Latvia came back in game with a goal three minutes from time. Isajevs scored on a header after a free kick. Macedonia was not a serious opponent for the entire second half and rightfully got punished. After reviewing the video it is clear that is was actually an own goal by Velkovski.

However, in the stoppage time Elmas scored his second cementing the win. The Lynx clinched the first points.

Macedonia’s next challenge in the 2020 EURO qualifiers is Slovenia. The match will be play on Sunday in the capital city of Ljubljana with a kick-off at 20.45 CET.