Goran Pandev returned in the starting eleven and made an assist as all Macedonians in Italy featured for their teams. Danny Musovski lost the North American Cahmpions League final, Damjan Shishkovski made a penalty foul for which he got a red card

photo by Genoa CFC: Destro and pandev celebrate the equalizer

CONCACAF Champions League final, Tigres – Los Angeles 2:1
Danny Musovski was among the starting 11 for LA and played the first half as he was substituted by Ghanaian striker Kwadwo Opoku. All goals came after the break with his team taking the lead and still losing the trophy.

Italy, Serie A, Spezia – Genoa 1:2
Goran Pandev made a start under returnee coach Davide Ballardini. In the 16th minute he penetrated the home defense and nicely found Mattia Destro in the box who equalized. In the 33rd minute he got a yellow card. Later Genoa found the winner through the spot to which Pandev played a role as he passed to Behraimi who was brought down. He was taken off in the 74th minute, right after the penalty goal.

Italy, Serie A, Napoli – Torino 1:1
Elif Elmas was once again a reserve player but this time got more playing time as he stepped in for injured Diego Demme in the 30th minute. Three minutes from time he picked up a yellow card.

Italy, Serie A, Udinese – Benevento 0:2
Ilija Nestorovski came in for Marvin Zeegelaar in the 73rd minute as his team was trailing a goal, but just four minutes later the visitors sealed the win with a second goal. He had one goal attempt near the end but his headers was floppy.

Italy, Serie B, SPAL – Lecce 1:0
Leonard Zhuta played the full 90 minutes for Lecce who entered a bad form with 5 winless round in a row.

Albania, Kategoria Superiore, Kukësi – Tirana 0:0
Agim Ibraimi captained the hosts for full 90 minutes as well as Kristijan Toshevski and Filip Najdovski for the visiting side.

Albania, Kategoria Superiore, Apolonia – Vllaznia 0:1
Mevlan Adili and Aleksandar Isaevski played the whole match for the visitors while their teammate Demir Imeri picked up a yellow card in the 70th minute and in the 84th was taken off.

Cyprus, Protáthlima Cyta, AEK – Karmiotissa 1:0
Both Ivan Trichkovski and Stefan Spirovski featured entire match for the hosts, while their teammate Daniel Mojsov wasn’t in the squad. In the dying moment of the opening half Spirovski tried to win a penalty, but his bad acting skills couldn’t cheat the VAR.

Cyprus, Protáthlima Cyta, Doxa – Olympiacos 1:1
Dushko Trajchevski played the entire match for the hosts picking up a yellow card in the 25th minute as his teammate Damjan Shishkovski started between the posts before getting a straight red card for a naive penalty foul in the 71st minute. The visitors equalized through that penalty kick.

France, Ligue 2, Nancy – Chambly 3:3
Vlatko Stojanovski wasn’t in the visiting squad as he is still not fit to play.

Germany, DFB Pokal, Stuttgart – Freiburg 1:0
Darko Churlinov entered the field on half-time taking the place of Tanguy Coulibaly. The winning goal was already scored. Right at the beginning of the second half he made a nice chance after stealing a ball and dribbling past an opponent, but the keeper saved his shot. 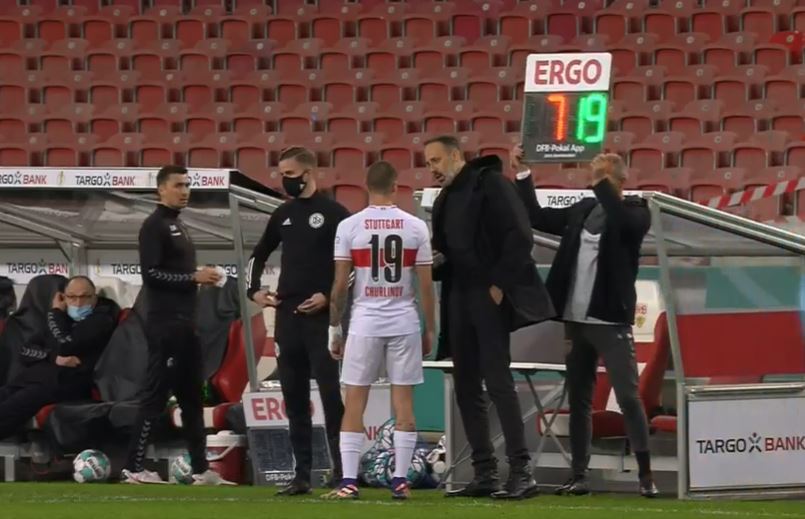 Churlinov gets ready to enter the field

Hungary, OTP Bank Liga, Újpest – Zalaegerszeg 3:1
Kire Ristevski entered the field in the 87th minute when all goals were already scored. He took the place of attacker Patrik Bacsa as his team was strengthening the defense in order to keep the lead.

Turkey, Süper Lig, Kayserispor – Konyaspor 1:2
Erdon Daci played until the 85th minute for the visiting side. After he got out his team scored twice to turn the result around and win the point. As already known, Daniel Avramovski isn’t available for the hosts as he is not registered for league matches.

Turkey, Süper Lig, Rizespor – Antalyaspor 2:1
Adis Jahovic was introduced on half-time for the hosts when the score was 1:0.