Germany, Bundesliga, Borussia Mönchengladbach – Hamburg 1:0
Valmir Nafiu was not included in the matchday squad by Hamburg.

Italy, Serie A, Parma – Roma 1:2
Stefan Ristovski was an unused substitute for Parma.  This has been a missed opportunity for Stefan.  With the injury to Mattia Cassani, the right-back position was up for grabs.  Ristovski was then given a start against Milan two games ago, but he struggled mightily on the defensive end.  After that performance, Ristovski was relegated to the bench and now Pedro Mendes starts at right-back.  Stefan’s offense is well ahead of his defense at this point, so he has to work on becoming more disciplined and a better marker on the defensive end.  Otherwise, he will have to move further up the field to hide his defensive shortcomings.

Belgium, Cofidis Cup, Dessel Sport – Mechelen 0:2
Tome Pachovski was not with Mechelen’s squad as he was in Macedonia working on his coaching license.  Since this was a cup match, Pachovski would most likely have started as backups usually get chances in these types of games, but Mechelen said on their website that Tome would not be with the team since he is in Macedonia working on his coaching license.  He apparently wants to get a head start as he plans on becoming a coach after his retirement.

Belgium, Cofidis Cup, Antwerp – Zulte Waregem 0:4
Aleksandar Trajkovski opened on the bench for Zulte Waregen before he was introduced in the 79th minute to take the spot of Idrissa Sylla. 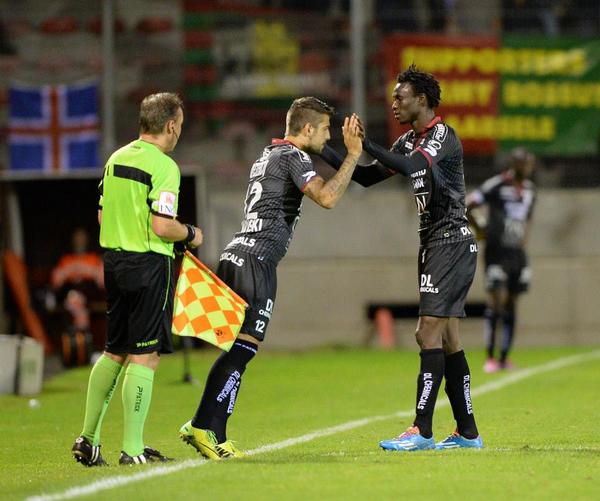 Belgium, Cofidis Cup, Lokeren – Sint-Eloois 6:0
Besart Abdurahimi did not feature for Lokeren in the comfortable victory over Sint-Eloois.

Belgium, Cofidis Cup, OH Leuven – Kortrijk 1:3
Jovan Kostovski came off the bench for OH Leuven in the 69th minute to replace Ogun Yavuz.  Five minutes later, Kostovski scored on a diving header following a free kick from the left.  That goal tied the game at 1:1, but Kortrijk then added two goals to pull away.

Austria, ÖFB-Cup, Kitzbühel – Austria Wien 0:5
Vanche Shikov started for Austria Wien and played until the 60th minute when an injury forced him to make way for Mario Leitgeb.  Shikov will definitely miss the game on the weekend, but Vanche is hopeful that he will return to action next week.  He has sharp pain in his lower back that makes it difficult to walk at this time.  He has been advised to rest in dealing with his injury.

Slovenia, PrvaLiga Telekom Slovenije, Rudar – Maribor 0:1
Agim Ibraimi played the whole match for Maribor who scored a goal in the final minute of stoppage time in the 90th minute to barely escape with three points.  Maribor captain Marcos Tavares scored on a precise header on that occasion.  Ibraimi, meanwhile, was also shown a yellow card in the 42nd minute.

Slovenia, PrvaLiga Telekom Slovenije, Domžale – Gorica 3:0
Zeni Husmani got the start for Domžale and played until the 38th minute when a serious injury forced him to be substituted by Anže Jelar.  Domžale fears that Husmani tore his ACL, so the injury does not look good for Zeni.

Croatia, Hrvatski Nogometni Kup, Ponikve – Dinamo Zagreb 1:2
Arijan Ademi was given a rest by Dinamo Zagreb who narrowly edged lower division side Ponikve to reach the next round of the Croatian Cup.

Russia, Kubok Russia, Krylia Sovetov – Ural 3:1
Adis Jahovikj started in attack for Krylia Sovetov and played until the 85th minute when he was replaced by Sergei Kornilenko.  Jahovikj played a part in all three goals, scoring one goal and dishing out two assists.  Adis showed nice skill on his goal in the 40th minute that gave Krylia Sovetov a 2:0 lead at that time.

Russia, Kubok Russia, Tosno – Amkar 0:0  (Tosno advanced 4:2 on penalties)
Marko Simonovski was an unused substitute for Amkar who was eliminated from the Russian Cup after going down in the penalty shootout to Tosno.

Russia, SOGAZ Football Championship, Amkar – Krasnodar 1:2
Marko Simonovski was not among the 18 players called up by Amkar who played two games in this midweek period (on Monday and Thursday).

Switzerland, Challenge League, Schaffhausen – Servette 0:1
Ezgjan Alioski stayed on the bench for Schaffhausen as an unused substitute.  Alioski was available after leaving the previous game with an injury, but he didn’t get a chance to play against Servette.

Switzerland, Challenge League, Chiasso – Wil 0:2
Samir Fazli played the entire game for Wil and scored his first league goal for the club in the 26th minute, while Zoran Baldovaliev played the opening hour for Chiasso before he was replaced by Janko Pacar. 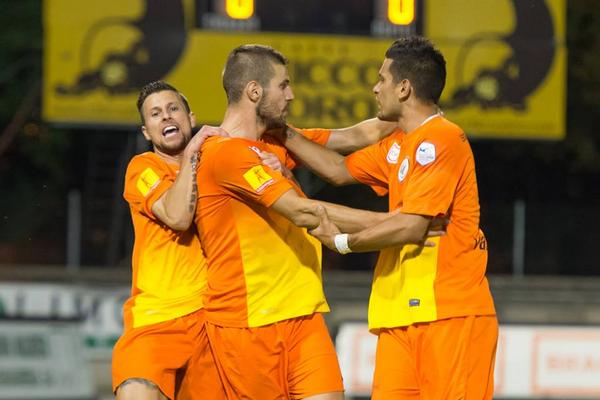 Netherlands, KNVB Beker, Spakenburg – NAC Breda 3:4
Aleksandar Damchevski played all 90 minutes for NAC Breda who barely escaped Spakenburg in a seven goal thriller.  Damchevski struggled in the game with his positioning as his poor marking led to the first goal for Spakenburg.

Bulgaria, Kupa na Bulgaria, Spartak Varna – Levski 1:7
Kristijan Naumovski played from the start for Levski and conceded one goal in the 90th minute.  Levski cruised to an easy win in the Bulgarian Cup over Spartak Varna.

Bulgaria, Kupa na Bulgaria, Burgas – Beroe 0:1
Stefan Spirovski started in midfield for Beroe and played until the 59th minute when he made way for Igor Djoman.  Beroe scored its lone goal in the 68th minute to narrowly get past Burgas.

Bulgaria, Kupa na Bulgaria, Chernomorets – Slavia 1:3
Kire Ristevski was an unused substitute for Slavia, while his teammate Dushan Savikj came off the bench at the start of the 2nd half to replace Ivan Valchanov.  This was Dushan’s league debut after he signed with Slavia earlier in the week, and in the 58th minute he scored a goal to help his team reach the next round of the domestic cup.

Spain, Liga BBVA, Granada – Levante 0:1
Stole Dimitrievski was not summoned on the first team of Granada.

France, Ligue 1, Rennes – Toulouse 0:3
Gjoko Zajkov was not among the 18 players called up by Rennes.

Romania, Cupa României, ASA Târgu Mureș – Concordia 4:1
Hristijan Dragarski played all 90 minutes for Concordia in central defense, while his teammate Filip Timov also got the start and played the opening 45 minutes before he was replaced at the start of the 2nd half by Adrian Cristea.  Timov also received a yellow card in the 33rd minute as Concordia was eliminated from the Romanian Cup with the heavy loss to ASA Târgu Mureș.

Bosnia and Herzegovina, BH Telecom Premier League, Sarajevo – Drina 2:0
Krste Velkoski played the entire game for Sarajevo and scored the opening goal in the 32nd minute when he controlled a long pass before calmly sending a right footed shot past the Drina keeper.

Serbia, Lav Kup Srbije, Crvena Zvezda – Borac Čačak 1:0
Daniel Avramovski started for Crvena Zvezda and played until the 62nd minute when an injury forced him to be substituted by Mihailo Ristić.  Avramovski re-aggravated his injury as he continues to have problems staying healthy.  After the game, the Crvena Zvezda manager said Avramovski has scary good potential based on what they have seen in trainings, but he must work on his physical readiness.  That is Daniel’s biggest problem right now.

Serbia, Lav Kup Srbije, Semendria – OFK Beograd 0:2
Darko Micevski played from the start for OFK Beograd who scored one goal in each half to down Semendria.

Serbia, Lav Kup Srbije, Voždovac – Sloga Kraljevo 3:2
Tome Kitanovski played all 90 minutes for Voždovac who needed a late game winner to edge Sloga Kraljevo and reach the next round of the Serbian Cup.

Sweden, Allsvenskan, Mjällby – AIK 1:0
Daniel Ivanovski opened on the bench for Mjällby before he was introduced in the 79th minute to take the place of David Löfqvist.  Mjällby, a desperate team, snatched an important win to move just two points above the relegation zone with only five rounds remaining until the end of the season.

Sweden, Allsvenskan, Häcken – Åtvidabergs 0:2
Leonard Zuta got the start at left-back for Häcken and played the whole match in the home defeat versus Åtvidabergs.  Häcken conceded both goals around the half hour mark.

Greece, Football Cup OPAP, PAS Giannina – Kerkyra 1:0
Vladimir Dimitrovski played the entire game for Kerkyra who suffered a slim loss in their Greek Cup encounter against PAS Giannina.  This was Vladimir’s first start for Kerkyra since he joined the club as a free agent this past summer.

Slovakia, Slovnaft Cup, Michalovce – Podbrezová 1:1  (Michalovce advanced 4:2 on penalties)
Dejan Peshevski started for Podbrezová and played until the 57th minute when he was replaced by Peter Nworah.  Since the match was tied at 1:1 after 90 minutes, it went into penalty kicks where Zemplín Michalovce prevailed 4:2 to eliminate Podbrezová from the Slovak Cup.