Gjurovski recorded one goal and 3 assists, Trichkovski scored a brace, Krste Velkoski netted once, while Zajkov was eventually given a chance to play a full league game.

Australia, Hyundai A-League, Newcastle United Jets – Perth Glory 2:2
Daniel Georgievski started at right-back for Newcastle and played all minutes in the unhappy draw against Perth. Daniel’s team had a lead even in the injury time, but conceded an equalizer in the 2nd minute of stoppage time. Georgievski also received a yellow card in the 40th minute.

Belgium, Jupiler Pro League, Charleroi – Eupen 2:2
Gjoko Zajkov made a rare start for Charleroi and lasted the full match in central defense as his team reached a draw at home against Eupen. 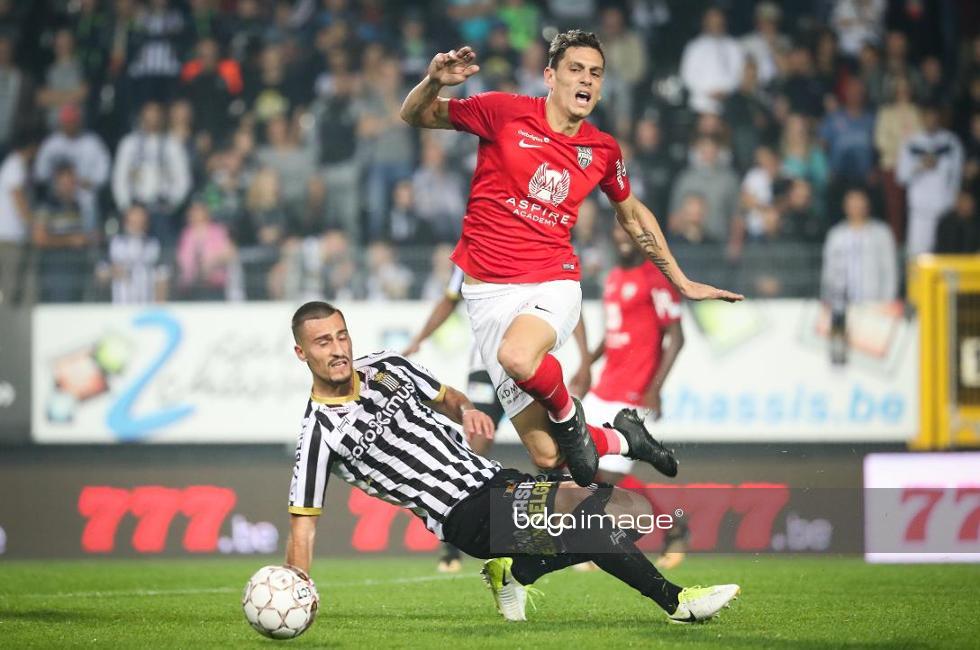 Bosnia-Herzegovina, BH Telecom Premijer Liga, Sloboda – Sarajevo 1:3
Aleksandar Lazevski started at left-back for Sloboda and played the whole game, while on the other side Krste Velkoski was Sarajevo’s captain and played 86 minutes on the left wing. Sarajevo won on the road and it was Velkoski who netted his teams opener with a nice goal from from outside the box.

Bulgaria, Parva Liga, Beroe – Lokomotiv Plovdiv 1:2
Vancho Trajanov opened in midfield for Lokomotiv and played almost the entire game as he was replaced in the 86th minute. Eventually, his team collected three points on the road against Beroe.

Croatia, Hrvatski Telekom Prva Liga, Istra 1961 – Rijeka 1:0
In this game, all three players from Macedonia made the start and also played all minutes. Risto Mitrevski and Tome Kitanovski played for Istra, while Leonard Zhuta started at left-back for Rijeka. Risto and Tome had the better end as their team collected three points thanks to a goal in the 17th minute.

Croatia, Hrvatski Telekom Prva Liga, Slaven Belupo – Inter 1:2
Mirko Ivanovski recoverd from the injury and opened on Slaven’s bench. He played from the 65th minute when he was introduced for Kristijan Bistrović.

Croatia, Hrvatski Telekom Prva Liga, Rudeš – Lokomotiva 0:1
Samir Fazli began on the hosts bench and was introduced in the
81st minute. His team suffered a tough loss as Lokomotiva netted the
game winner in the 2nd minute of stoppage time.

Croatia, Hrvatski Telekom Prva Liga, Dinamo – Osijek 1:1
After his game for Macedonia, Arijan Ademi also made the first appearance for his club Dinamo following his suspension. Arijan came off the bench in the 53rd minute and he even netted a goal, but the goal was unjustifiably disallowed due to an alleged offside position. Meanwhile, Muzafer Ejupi played the whole game in attack for Osijek.

Cyprus, Protáthlima Cyta, Aris – AEK 0:5
Edin Nuredinoski was on Aris’ goal and couldn’t stop Ivan Trichkovski who
scored twice. The first goal in the 29th minute and the second one in
the 42nd from penalty. Trichkovski played until the 74th minute, Daniel Mojsov played the whole match for AEK while Vlatko Drobarov didn’t play for the home team.

Cyprus, Protáthlima Cyta, Ermis – Omonia 2:1
Aleksandar Damchevski entered the match in the 89th minute for Ermis in the 2:1 win against Omonia.

Cyprus, Protáthlima Cyta, Nea Salamis – Ethnikos 0:0
Goalie Martin Bogatinov and left-back Mite Cikarski were startes for Ethnikos and helped there team to keep a clean sheet away to Nea Salamis.

Czech Republic, HET Liga, Brno – Slovácko 2:1
Veliche Shumulikoski was captain of Slovácko and played the whole match, but couldn’t help his team to avoid the defeat away to Brno.

England, Championship, Leeds United – Reading 0:1
Ezgjan Alioski was left out of the Leeds United squad for their clash with Reading and his team lost.

Hungary, OTP Bank Liga, Puskás Akadémia – Ferencváros 1:1
Stefan Spirovski was in the starting line-up for the away team and played until the 75th minute.

Italy, Serie A, Cagliari – Genoa 2:3
Goran Pandev watched from the bench as his teammates recorded the first win this season.

Japan, Meiji Yasuda J1 League, Yokohama F·Marinos – Ōmiya Ardīja 1:1
David Babunski came in instead Naoki Maeda in the 83rd minute when the score was already 1:1. This was his first league appearance after not being used 7 games in a row.

Finland, Veikkausliiga, HJK – Lahti 3:0
Marko Simonovski opened in attack for Lahti and played 76 minutes on the loss away to HJK.

Netherlands, Eerste Divisie, Telstar – Dordrecht 3:0
Both Denis Mahmudov and Antonio Stankov played the whole
match for Dordrecht, but didn’t help their team to avoid the defeat away
to Telstar. Stankov received a yellow card in the 81st minute.

Poland, Lotto Ekstraklasa, Zagłębie – Górnik 3:2
Aleksandar Todorovski entered the match in the 79th minute and helped his team to hold the lead and win against Górnik.

Romania, Liga I Betano, Sepsi – Astra 0:0
Milovan Petrovikj played the whole match for the home team on the scoreless draw against Astra.

Slovenia, PrvaLiga Telekom Slovenije, Domžale – Ankaran Hrvatini 6:0
Zeni Husmani played the first 45 minutes for Domžale in their big home win and he was substituted at the halftime by Albanian international Rubin Hebaj. His teammate Agim Ibraimi wasn’t summoned for this game.

Spain, Segunda División, Córdoba – Gimnàstic 1:5
Stole Dimitrievski was the visitors starting goalkeeper and he conceded one goal in their big away win at this game. He was also shown a yellow card at 60th minute of the game.

Sweden, Allsvenskan, Norrköping – Malmö 1:3
David Mitov Nilsson was the starting goalkeeper for Norrköping and conceded three goals in the loss against Malmö who with this win sealed the title.

Thailand, Toyota Thai League, Sisaket – Bangkok United 2:7
Mario Gjurovski played entire match for Bangkok in their huge away victory. He scored his team’s fourth goal at 56th minute and he provided assists to Pokklaw Anan and Dragan Bošković for the last three goals of the match at 62nd, 70th and 79th minute.

Turkey, Süper Lig, Antalyaspor – Göztepe 1:3
Adis Jahovikj was once again man of the match. He scored two goals for Göztepe at 8th minute and 19th minute of the match. He was substituted by Ömer Şişmanoğlu at 87th minute. Jahovikj scored 9 goals so far and he is the leading scorer of the Turkish championship together with Bafétimbi Gomis.

2001 Macedonia holds Czechia to a 1:1 draw in a friendly match in Skopje.

Round 20 Results from earlier today:

All 12 clubs will be in action for Round 21 this upcoming Wednesday.