photo by MOL Fehérvár FC: Musliu and Nikolov after the win

Albania, Kategoria Superiore, Kukësi – Laçi 1:1
Both Tome Kitanovski and Edis Malikji played the full match for the hosts. Malikji played on his natural right back position, whereas Kitanovski filled in as a left back.

Albania, Kategoria Superiore, Partizani – Flamurtari 1:0
As usual, center back Egzon Belica played another full game for Partizani and helped them keep a clean sheet and defeat Flamurtari by 1:0, despite being a player down since the 30th minute.

Albania, Kategoria Superiore, Skënderbeu – Bylis 0:3
Artim Polozhani and his Skënderbeu suffered a disappointing 0:3 home loss to Bylis. Artim played the full game as a center back and he was directly at fault for the last goal when he carelessly fouled Guindo inside the penalty area. The penalty was then successfully converted by Bylis’ goalkeeper Hidi.

Albania, Kategoria Superiore, Teuta – Luftëtari 3:1
Right back Blagoja Todorovski played the full game for Teuta and assisted the first goal for his team in the 30th minute, when his cross from the right side reached Montenegrin international Nikač who scored with a header. As usual, his teammate Bobi Celeski remained on the bench as the backup goalkeeper. Teuta ended up winning the game by 3:1.

Albania, Kategoria Superiore, Vllaznia – Tirana 0:2
Vllaznia’s coach Mirsad Jonuz decided to play without both of the Macedonians in the team – Filip Gligorov and Aleksandar Ristevski, in this weekend’s encounter against Tirana. Vllaznia ended up losing 0:2.

Armenia, Bardzraguyn Khumb, Pyunik – Yerevan 4:1
Denis Mahmudov started for Pyunik and scored two goals for his club. He first scored in the 9th minute from a free kick to give the hosts 1:0 lead, and in the 42nd he added a great second goal to make it 3:0. His teammate Antonio Stankov played the full game as a right back.

Belgium, Jupiler Pro League, Waasland-Beveren – Charleroi 0:4
Gjoko Zajkov remained once again an unused substitute by Charleroi. Zajkov has recently demanded allowence to leave the club or be sent on loan as he insists finding a club where he would get regular playing time. However, with the transfer window closing, it seems unlikely that Zajkov will manage to leave Charleroi. His club ended up scoring an impressive 0:4 away win.

Bosnia-Herzegovina, BH Telecom Premijer Liga, Željezničar – Sarajevo 5:2
Krste Velkoski started the game on the bench and entered the field after the halftime break. The score after the first time was tied on 2:2, but Željezničar ended up scoring three unanswered goals in the second half to get an impressive 5:2 victory.

Bosnia Herzegovina, BH Telecom Premijer Liga, Velež – Radnik 0:1
Both Kosta Manev and Yani Urdinov played the full match for the hosts who lost to Radnik by 0:1

Bulgaria, Parva Liga, Cherno More – Dunav Ruse 1:1
Aleksandar Isaevski started on the bench and played only the final 10 minutes of the game. He also got booked in the 85th minute.

Bulgaria, Parva Liga, Slavia – Arda 2:3
Darko Glishikj played the full 90 minutes for the visitors who got an important win against Darko Tasevski‘s Slavia. Tasevski however is still sidelined by his club due to an injury.

Croatia, Hrvatski Telekom Prva Liga, Hajduk – Dinamo 1:0
Captain Arijan Ademi started the game for Dinamo and played for 52 minutes when got taken off after he suffered an injury and couldn’t carry on. Tests are yet to show the severity of the injury but it remains to be seen whether he will be able to take part on the upcoming national team fixtures or if he will be forced to withdraw. As for the game, the result was still 0:0 by the time he left the field, but Hajduk took the lead only four minutes later. Things got heated up in the 75th minute when Dinamo’s Austrian international Dilaver got a direct red card, which caused a protest by his team-mates which ended in Ademi, despite having left the field and being on the bench, get a red card as well. However, only 5 minutes later Hajduk’s goalscorer Jradi also got a red card so both teams got evened out with 10 men on the field. In the end the result remained 1:0 and Dinamo suffered a narrow loss, hence they lost Ademi and Dilaver for at least one game. 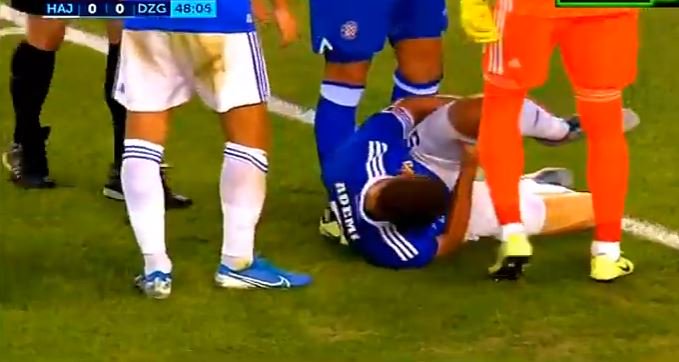 Croatia, Hrvatski Telekom Prva Liga, Istra – Osijek 0:0
Agron Rufati watched from the match as his Istra pulled a goalless draw against Osijek. For the visitors, Todor Todoroski did not get summoned as he played for Osijek’s second team.

Croatia, Hrvatski Telekom Prva Liga, Rijeka – Inter 1:1
Darko Velkovski did not make the 23 players matchday squad by Rijeka. Darko’s status at Rijeka is very concerning as the coach doesn’t seem to rely much on him, which is also bad news for Igor Angelovski who sees Velkovski as an important part of the national team’s defense.

Cyprus, Protáthlima Cyta, Paphos – AEK 0:2
Ivan Trichkovski scored both goals for AEK and both came from the penalty spot. He actually won the first penalty as his shot was blocked by a defending player in the box but with a handball. Daniel Mojsov was not part of this match.

Cyprus, Protáthlima Cyta, Olympiakos – Doxa 1:1
Dushko Trajchevski played the whole match for the away side.

England, Championship, Leeds United – Swansea 0:1
Ezgjan Alioski played 83 minutes for the hosts before he was taken off. He was shown a yellow card in the first half. The winning goal came in the final moments of the match.

Finland, Veikkausliiga, KPV – Honka 0:1
Filip Ivanovski was not part of the match day squad for the losing team.

France, Ligue 1, Nîmes – Brest 3:0
Vlatko Stojanovski remained on the bench during his team’s first win of the season.

Hungary, OTP Bank Liga, Ferencváros – Diósgyőr 1:0
Stefan Spirovski was not summoned for this match for the home team.

Hungary, OTP Bank Liga, Fehérvár – Kisvárda 3:0
Both Visar Musliu and Boban Nikolov played the whole match for the winning side. Musliu actually opened the scoreline, scoring his first goal for his new team.

Italy, Serie A, Genoa – Fiorentina 2:1
Goran Pandev replaced Andrea Pinamonti in the 84th minute and celebrated a win over Fiorentina.

Italy, Serie A, Juventus – Napoli 4:3
Elif Elmas replaced Allan in the 74th minute and few minutes later Napoli equalized the score, but in the 92nd minute Koulibaly scored unlucky own goal and Juventus won with 4:3.

Italy, Serie A, Udinese – Parma 1:3
Ilija Nestorovski was in the starting lineup for Udinese and played until the 70th minute. His team had the 1:0 lead, but lost with 1:3 at the end.

Italy, Serie B, Trapani – Venezia 0:1
Nikola Jakimovski played the whole match for Trapani, but wasn’t able to help his team avoid the defeat.

Romania, Liga I Betano, Botoșani – Academica Clinceni 2:2
Stefan Ashkovski was in the starting lineup for Botoșani and was replaced in the 81st minute.

Serbia, Linglong Tire SuperLiga, Mačva – Radnik 1:1
Boban Georgiev was in the starting lineup for Radnik and played for 45 minutes. He earned a yellow card at the end of the first half. Zoran Danoski wasn’t included in Radnik’s squad.

Slovakia, Fortuna Liga, Trenčín – Nitra 2:2
Milan Ristovski continued his good form as he scored yet another goal for Nitra. He played for 84 minutes and he scored in the 57th minute to equalize on 2:2, which eventually remained the final score.

Slovakia, Fortuna Liga, ViOn – Ružomberok 4:2
Tihomir Kostadinov played the whole game for the visitors who lost 4:2 from ViOn, for whom Tomche Grozdanovski remained on the bench as an unused substitute.

Slovakia, Fortuna Liga, Žilina – Senica 5:0
Enis Fazlagikj remains sidelined by Žilina while he is still recovering from an injury.

Spain, Primera División, Levante – Valladolid 2:0
Enis Bardhi started the game on the bench and entered the field in the 78th minute. The score at the time was 1:0 but Levante managed to add one more goal during the stoppage time.

Spain, Primera División, Valencia – Mallorca 2:0
Aleksandar Trajkovski made another appearance for Mallorca by coming off the bench in the 64th minute.

Spain, Segunda División, Rayo Vallecano – Deportivo La Coruña 3:1
Stole Dimitrievski remains to serve as a backup goalkeeper for Rayo Vallecano as he spent another game on the bench.

Sweden, Allsvenskan, Sundsvall – Göteborg 0:2
David Mitov Nilsson was back in front of Sundsvall’s goal but his team lost to Göteborg as David conceded two goals.

Switzerland, Challenge League, Vaduz – Grasshoppers 2:2
Nikola Gjorgjev scored in the 55th minute to bring a 2:1 lead for the visitors. In the first injury minute he was taken off for Nikola Sukačev.

Turkey, Süper Lig, Konyaspor – Antalyaspor 2:2
Erdon Daci played the full match for Konyaspor and he assisted the first goal for the hosts for 1:1. Meanwhile his teammate Leonard Zhuta remains to be left out from the squad.

Turkey, Süper Lig, Malatyaspor – Alanyaspor 2:3
Adis Jahovic played another full game and scored another goal for Malatyaspor. Alanyaspor started off superior after leading 0:3 at halftime, but the hosts fought back which resulted in two goals for them. Adis scored in the 57th minute to make it 2:3, but they failed to score a third goal as well to pull a draw.