Albania, Kategoria Superiore, Bylis – Teuta 0:0
Blagoja Todorovski started at right-back for Teuta and played almost the whole match as he received a red card in stoppage time. His teammate Bobi Celeski remained on the bench as the reserve goalie.

Albania, Kategoria Superiore, Laçi – Vllaznia 3:0
Aleksandar Ristevski played the entire game at central back for Vllaznia as his team suffered a heavy loss on the road. His teammate Filip Gligorov didn’t play in this match in which Mirsad Jonuz was Vllaznia’s coach.

Armenia, Bardzraguyn Khumb, Ararat – Pyunik 4:2
Antonio Stankov served all minutes as right-back for Puynik, while Denis Mahmudov started at centre-forward and lasted 62 minutes on the pitch. Denis opened the score in the 22nd minute, but Ararat answered with four. Pyunik was just able to respond with one and that goal was netted by Antoniot in the 2nd minute of stoppage time.

Australia, Hyundai A-League, Western Sydney Wanderers – Sydney FC 1:0
Daniel Georgievski began at right-back for the hosts and was 90 minutes part of a defense that kept a clean sheet. Furthermore Daniel provided the assist for the lone goal netted in the 9th minute.

Daniel’s assist (at the beginning of the video):

Bosnia Herzegovina, BH Telecom Premijer Liga, Čelik – Velež 0:2
Kosta Manev and Yani Urdinov both started for the visitors and helped their team to keep a clean sheet in the road win at Čelik.

Croatia, Hrvatski Telekom Prva Liga, Hajduk – Slaven Belupo 2:0
Muzafer Ejupi played from the 69th minute for Slaven to strengthen his teams offense, but in vain as Slaven conceded one more goal in the loss away to Hajduk.

Cyprus, Protáthlima Cyta, AEK – Enosis 4:4
Ivan Trichkovski scored a hat-trick for the hosts in this crazy match, while Daniel Mojsov returned to the bench after his injury. For the visiting side, Risto Mitrevski played the whole match. The first goal for Trichko came before the end of the first half, when he fired a shot from just outside the box, while the other two goals came by converting penalties.

Cyprus, Protáthlima Cyta, Apollon – AEL 1:2
Davor Zdravkovski played the whole match for the winning side, while his teammate Kire Markoski remained on the bench

Cyprus, Protáthlima Cyta, Doxa – Anorthosis 0:6
Dushko Trajchevski started the match on the bench and he was called upon in the 68th minute when his team was already 0:4 down.

Cyprus, Protáthlima Cyta, Paphos – Ethnikos 1:1
The trio Martin Bogatinov, Bojan Markoski and Jovan Kostovski all played the whole match for the away team.

England, Championship, Sheffield Wednesday – Leeds United 0:0
Ezgjan Alioski played the whole match for Leeds. Near the end he had a header chance that struck the left post. 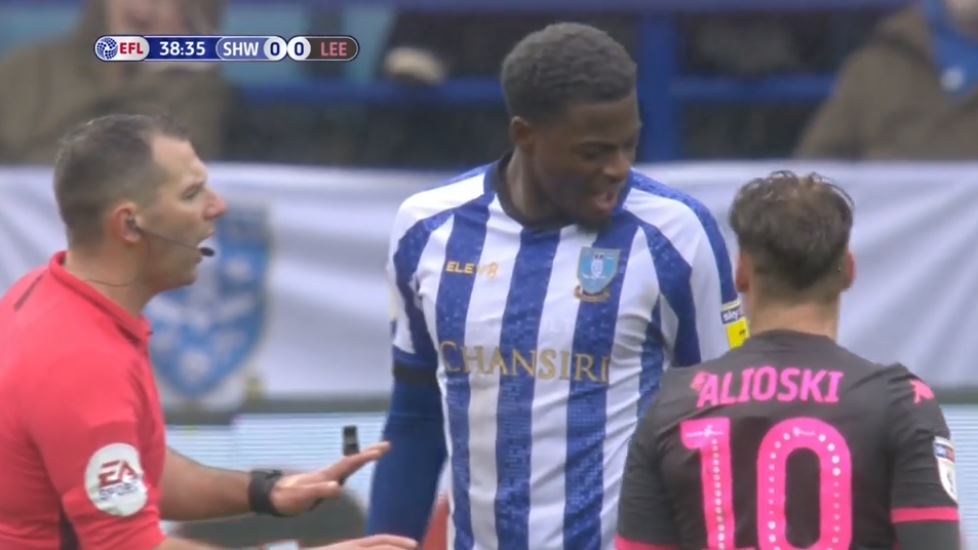 Alioski gets into it with a giant CB from Sheffield. He is like a honey badger, small but fearless, sometimes a little crazy (in a good way).

France, Ligue 1, Reims – Nîmes 0:0
Vlatko Stojanovski is out with an injury.

Hungary, OTP Bank Liga, Fehérvár – Ferencváros 1:2
Visar Musliu and Boban Nikolov both played the whole match for the hosts who lost to one of their main title rivals at home. 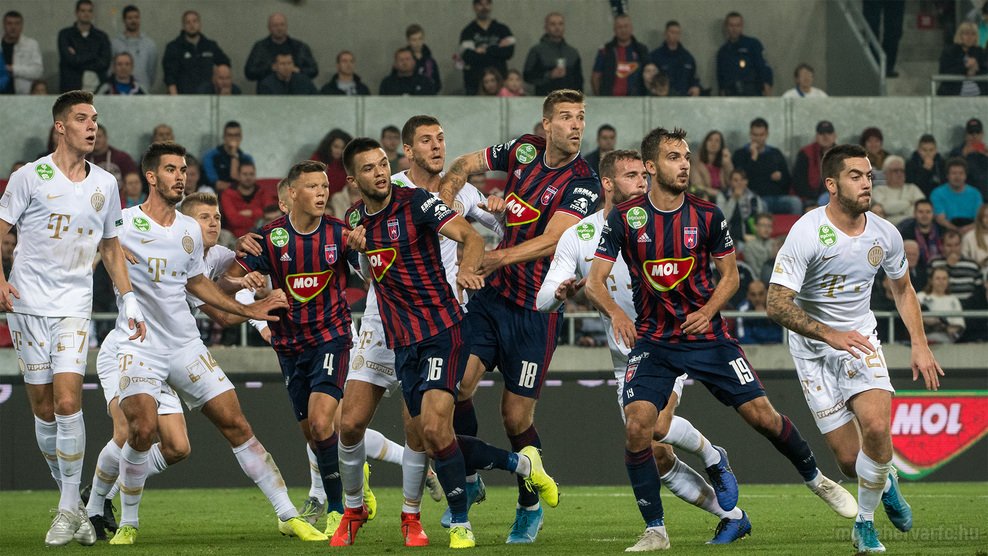 Nikolov (#19) and Musliu (#16) battle for positioning on a set piece during the match; photo: Fehérvár FC

Hungary, OTP Bank Liga, Paks – Diósgyör 1:2
Mirko Ivanovski scored his first goal for his new side, but he had to be taken off in the first half after he suffered a broken nose injury.

Germany, Bundesliga, Mainz – Köln 3:1
Darko Churlinov was bypassed by Köln’s first team this weekend, but he scored a hat trick for Köln II in the 4:1 win over Lippstadt.

Italy, Serie A, Genoa – Brescia 3:1
Genoa played awful in the first half and was losing 0:1 at home by Brescia, but the new coach Motta got the substitutions right. He brought on Pandev, Kouame and Agudelo and each of those players scored one goal apiece for Genoa’s 3:1 win. The ageless wonder Goran Pandev scored a great goal in the 79th minute with a beautiful left footed shot to the upper left corner.

Italy, Serie A, Spal – Napoli 1:1
Elif Elmas was in the starting lineup for Napoli and was replaced in the 54th minute by Ruiz. His team had the early lead, but few minutes later conceded a goal and was held to draw away to Spal.

Italy, Serie A, Atalanta – Udinese 7:1
Ilija Nestorovski watched Udinese’s disaster away to Atalanta from the bench for substitute players.

Italy, Serie B, Trapani – Empoli 2:2
Nikola Jakimovski was brought in at the start of the second half and played for Trapani until the end of the match. His team managed to win a point with an own goal by Empoli in the 8th minute of the stoppage time.

Portugal, Liga NOS, Sporting – Guimaraes 3:1
Stefan Ristovski is still out of Sporting’s squad because of injury.

Romania, Liga I Betano, Botoșani – Astra 1:2
Stefan Ashkovski entered the match in the 59th minute and scored a nice goal in the 83 minute, but that wasn’t enough as his team lost at home by Astra with 1:2.

Romania, Liga I Betano, Sepsi – Voluntari 0:0
Marko Simonovski entered the match in the 81st minute and earned a yellow card in the 89th.

Serbia, Linglong Tire SuperLiga, Vojvodina – Javor 2:2
Aleksa Amanovikj was in the starting lineup and played the whole match for Javor.

Serbia, Linglong Tire SuperLiga, Radnik – Crvena zvezda 0:5
Both Zoran Danoski and Boban Georgiev were in the starting lineup for Radnik and played the whole match, but weren’t able to help their team avoid the big defeat by Crvena zvezda.

Slovakia, Fortuna Liga, Ružomberok – Trenčín 2:2
Tihomir Kostadinov played full game for Ružomberok and he was also booked in the 40th minute of the game.

Slovakia, Fortuna Liga, Senica – Sereď 0:1
Dejan Iliev was Sereď’s starting goalkeeper and he kept a clean sheet at this game.

Slovakia, Fortuna Liga, ViOn – Nitra 1:0
Tomche Grozdanovski played whole match for ViOn as well as Milan Ristovski for Nitra. Both of our internationals received a yellow cards, Grozdanovski at 89th and Ristovski at 82nd minute of the match.

Slovenia, Prva Liga, Domžale – Bravo 2:0
Besart Abdurahimi spent all minutes on the pitch for the visitors.

Spain, Primera División, Leganés – Mallorca 1:0
Aleksandar Trajkovski started on the bench for Mallorca and he came as a substitution in the 69th minute replacing Aleix Febas.

Sweden, Allsvenskan, Sundsvall – Helsingborg 1:2
David Mitov Nilsson spent whole game between Sundswall’s posts and he received two goals in his team’s home defeat. He was also shown a yellow card in the 82nd minute of the game.

Sweden, Superettan, Brommapojkarna – Varbergs 1:1
Daniel Krezikj opened the game on the left wing for Varbergs and he played until 83rd minute when he made way for Iraqi international Rebin Asaad. He scored the opening goal of the game in the 47th minute.

Switzerland, Challenge League, Grasshoppers – Vaduz 3:3
Nikola Gjorgjev  played 73 minutes for the hosts and took part in two goals. His crosses from free kicks proved to be deadly for the Vaduz visitors. In the 12th minute after his cross the ball rebounded to a teammate who broke the dead lock. In the 58th minute he perfectly served Nassim Ben Khalifa who scored on a header for 2:1.