Kire Markoski and Ivan Trichkovski each scored and assisted, Krste Velkoski and Ezgjan Alioski each found the back of the net once, teenager Tomche Grozdanovski debuted in Slovakia, Darko Velkovski eventually made a league appearance for Rijeka, while Enis Bardhi gave Real Madrid a penalty for handballing

Australia, Hyundai A-League, Newcastle United Jets – Adelaide United 0:0
Daniel Georgievski started at right-back for Newcastle and was 90 minutes part of a defense that kept a clean sheet in the goalless draw against Adelaide.

Bosnia-Herzegovina, BH Telecom Premijer Liga, Tuzla City – Sarajevo 0:3
As the Bosnian League resumed this weekend, it took Krste Velkoski only 6 minutes to add yet another goal to his tally. However the goal went into shadow as Krste ended up colliding with the opponent’s goalkeeper Fejzić who then suffered a concussion and had to be substituted. Velkoski went on to play the entire game and Sarajevo won 0:3 to maintain their first place on the table.

Velkoski’s goal (at the beginning):

Bulgaria, Parva Liga, Botev (V) – Slavia 1:3
Both Stefan Ashkovski and Darko Tasevski started the game for the visitors in the offensive midfield. Darko lasted 71 minutes on the field, while Ashkovski got substituted 15 minutes later. Stefan also got booked at the start of the second half.

Croatia, Hrvatski Telekom Prva Liga, Dinamo – Osijek 3:0
Neither Arijan Ademi by Dinamo nor Muzafer Ejupi by Osijek made the squad for this game. Ademi was rested after his play in Europa League earlier this week, while Ejupi is still recovering from his injury.

Croatia, Hrvatski Telekom Prva Liga, Hajduk – Gorica 0:0
Mirko Ivanovski continues to be sidelined by Hajduk due to an injury.

Croatia, Hrvatski Telekom Prva Liga, Istra – Lokomotiva 0:0
Agron Rufati did not make the bench for this weekend’s encounter against Lokomotiva.

Croatia, Hrvatski Telekom Prva Liga, Rudeš – Rijeka 2:4
Darko Velkovski finally made his long waited league debut for Rijeka as he entered the game after the halftime break and played the remaining 45 minutes. Milan Ristovski on the other hand spent the entire game on Rijeka’s bench.

Cyprus, Protáthlima Cyta, AEK – Enosis 3:0
Ivan Trichkovski played the whole match for the winning side and was one of the best players on the pitch. He provided an assist for the second goal of the game as well as set the final score by scoring a goal in the final moments of the match. Daniel Mojsov did not feature in this game for AEK.

Cyprus, Protáthlima Cyta, Nea Salamis – Alki 1:1
Dushko Trajchevski played the whole match for the visitors. He was booked in the second half.

England, Championship, Leeds United – Bolton 2:1
Ezgjan Alioski scored the game-winning goal for Leeds.He sent a cross goalwards which was slightly deflected and caught out the opposing keeper who could only parry it down onto the bar and behind the line.

Greece, Souroti Soúper Lígka, Lamia – Larissa 2:1
Neither Nikola Jakimovski nor Davor Taleski played for the losing side. Jakimovski was substituted early in the previous match and it is possible he is out because of an injury, while Taleski still hasn’t made a breakthrough to the bench.

Hungary, OTP Bank Liga, Újpest – Diósgyőr 5:0
Kire Ristevski had to be taken off in the first half after he suffered an injury. It remains to be seen how serious the injury was and how long will he be absent.

Italy, Serie A, Chievo – Genoa 0:0
Goran Pandev substituted Antonio Sanabria in the 75th minute but could not help his team score and win against the bottom-placed Chievo.

Netherlands, Erste Divisie, Cambuur – Dordrecht 1:3
Antonio Stankov could not captain his team on this road game due to a hamstring injury.

Portugal, Liga NOS, Maritimo – Sporting 0:0
Stefan Ristovski started at right wing-back in a 3-4-3 formation and played all 90 minutes. Sporting was wasteful in attack, forcing them to settle for just 1 point.

Romania, Liga I Betano, Dunărea – Dinamo 0:0
Fourth game in a row Filip Gligorov wasn’t part of the Dunărea squad as he is still recovering from an injury.

Romania, Liga I Betano, Sepsi – Viitorul 0:0
Marko Simonovski couldn’t help his team beat Viitorul as he is out with an injury.

Saudi Arabia, Dawri Al-Muhtarifin Al-Saudia, Al-Ra’ed – Al-Faysaly 0:3
Ferhan Hasani started on the bench and after his team was two goals down at half-time he was introduced during the break taking the place of Abdullah Almogren. Sixth winless league game in a row for his team.

Serbia, SuperLiga, Radnik – Crvena zvezda 0:1
Zoran Danoski played until the 73rd minute when Uroš Damjanović took his place. His Radnik was beaten by an early goal by the title holders.

Serbia, SuperLiga, Vojvodina – Radnički 0:1
Aleksandar Todorovski played the entire match for the winning side. His team is the season surprise by being second!

Slovakia, Fortuna Liga, ViOn – Trenčín 3:1
Tomche Grozdanovski entered the field for the home team in the 66th minute substituting Jakub Švec. This was his debut in the Slovak championship. The 18-year-old joined ViOn earlier this month from 2.MFL East side Kozhuf.

Slovakia, Fortuna Liga, Spartak – Dunajska Stredá 3:1
Kire Markoski played whole match for Spartak and he was one of the best players on the field. He provided an assist to the Austrian international Kubilay Yilmaz in the 35th minute for the opening goal and he scored the second goal for his team in the 48th minute. Markoski was also shown a yellow card in the 54th minute.

Slovakia, Fortuna Liga, Železiarne – Ružomberok 0:1
Tihomir Kostadinov started in midfield for Ružomberok and played until the third minute of additional time when he was substituted by Matúš Kmeť while his teammate Yani Urdinov didn’t play at this game.

Spain, Primera División, Levante – Real Madrid 1:2
Enis Bardhi featured 89 minutes for Levante in their home loss against Real with two suspicious VAR penalties called against his team. The first one was called against Enis after who played with hand in the box in the. A minute before the end Nikola Vukčević took his place. 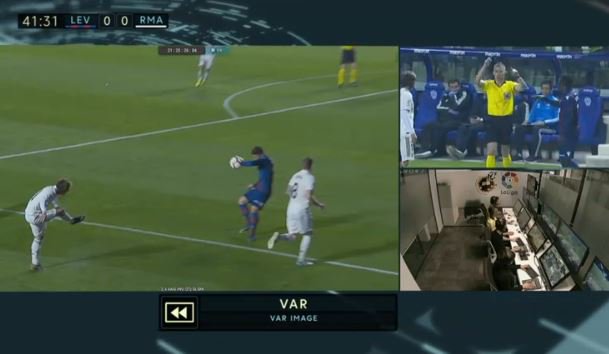 The VAR review on Bardhi’s handball

Spain, Primera División, Getafe – Rayo Vallecano 2:1
Stole Dimitrievski was Rayo’s starting goalkeeper and didn’t have a good match since he conceded two goals and had no intervention. Despite that, none of the goals were his fault as he could not do anything to prevent them. This was Rayo’s fourth loss in a row so they’ll have a very difficult time to avoid relegation.

Sweden, Svenska Cupen Group 8, Göteborg – GAIS 0:0 interrupted
Predrag Randjelovic started and played for GAIS until the match got interrupted. It happened just 15 second into the second half when the home fans used pyrotechnics that ended onto the pitch. His teammate keeper and player of Macedonian origin, Marko Johansson, was hit on the head by one of the flares. Now GAIS awaits a green table win.

Turkey, Süper Lig, Beşiktaş – Fenerbahçe 3:3
Elif Elmas got to play only the last six minutes of this interesting derby ion which his team came back after being down 3:0. All goals were already scored when Elif took Miha Zajc’s place. Despite getting little playing time, he had two chances to decide the winner.

Video of the near Elif Elmas goal in the 87th minute.

EE has been unlucky in these huge rivalry games. Away to Galatasaray, GK Muslera made a huge stop to deny Elmas (score was 2:2 and finished that) and now Besiktas GK Karius made a big save to keep out Elmas. Too bad. https://t.co/5zICq0Tz9E