Nikola Gjorgjev had a brace in Switzerland, while Risto Mitrevski, Enis Bardhi, Milan Ristovski and Adis Jahovic netted a goal apiece for their respective teams while Marko Simonovski assisted by winning a penalty.

photo by GCZ.ch: Gjorgjev during the match in which he netted twice

Albania, Kategoria Superiore, Laçi – Kukësi 2:0
Edis Malikji was Kukësi’s starting RB and played the whole game. In the 43rd minute he got booked with a yellow card.

Armenia, Bardzraguyn Khumb, Ararat – Alashkert 1:3
Risto Mitrevski started for Alashkert in defense and scored the important 1:2 goal in the 45th minute. Before, his team was one goal down and with a player less due to a red card, but Alashkert was able to net three goals and grab three points on the road.

Armenia, Bardzraguyn Khumb, Shirak – Ararat-Armenia 1:0
Aleksandar Damchevski played all minutes in central defense for the visitors as his team suffered a narrow loss away to Shirak.

Bulgaria, Parva Liga, Lokomotiv – Slavia 0:1
Darko Tasevski once again wasn’t part of Slavia’s squad as he is still not available due to his injury.

Croatia, Hrvatski Telekom Prva Liga, Gorica – Dinamo 0:0
Arijan Ademi captained Dinamo in this game and played all minutes in the goalless draw away to Gorica. 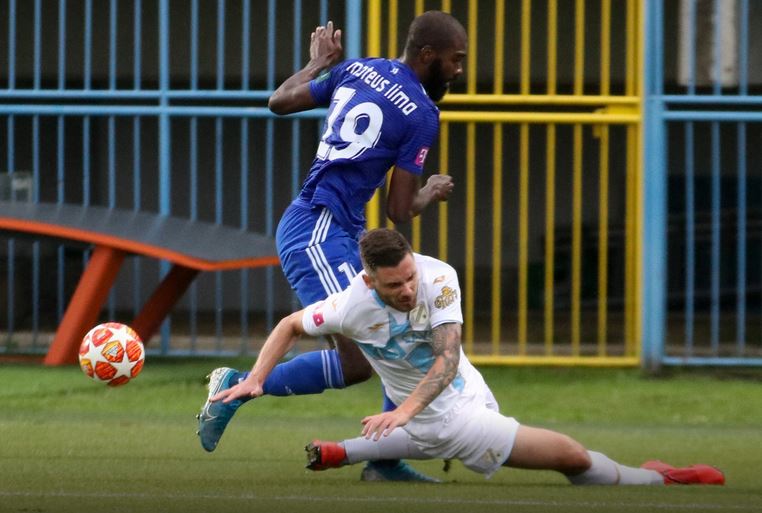 England, Championship, Cardiff City – Leeds United 2:0
Ezgjan Alioski came off the bench in the 62nd to help his team avoid the loss, but Leeds afterwards conceded one more goal at Cardiff City.

Hungary, OTP Bank Liga, Debreceni – Diósgyör 4:0
Mirko Ivanovski played from the 56th minute as his team was demolished on the road by Debreceni.

Hungary, OTP Bank Liga, Mezőkövesd – Fehérvár 2:1
Both internationals from Macedonia, Visar Musliu and Boban Nikolov, started for Fehérvár. The former played the entire game in central defense, while Boban opened in defensive midfield and lasted 82 minutes on the field. Eventually, their team suffered a loss by conceding a goal late in the 3rd minute of stoppage time.

Norway, Eliteserien, Mjøndalen – Sarpsborg 08 1:0
David Mitov Nilsson was the visitors starting goalkeeper and conceded one goal in the loss away to Mjøndalen.

Poland, Ekstraklasa, Cracovia – Jagiellonia 1:2
Dejan Iliev was not available for the visitors as he is still injured.

Romania, Liga I Betano, Botoșani – Cluj 0:2
Stefan Ashkovski started on the right wing for the hosts and played until the 58th minute, whereas his teammate David Babunski wasn’t part of the squad. Moreover Stefan received a yellow card in the 7th minute.

Romania, Liga I Betano, Voluntari – Poli Iași 1:0
Voluntari won thanks to a penalty in the 17th minute and Marko Simonovski was the player who was fouled in the box prior to that penalty. Later in the 60th minute Marko also got a yellow card. Eventually, he lasted 82 minutes on the pitch.

Slovakia, Fortuna Liga, Nitra – Senica 2:0
Milan Ristovski started at center-forward for Nitra and helped his team to secure three points from the clash against Senica as he headed home a cross from the right hand side in the 83rd minute. This was already Milan’s tenth goal this season in so far 24 league games, additionally he has three goals out of three games in the cup.

Slovakia, Fortuna Liga, Sereď – Pohronie 2:2
Filip Duranski was all minutes in central midfield for Sereď and got booked in the 78th minute.

Slovenia, Prva Liga, Bravo – Mura 1:0
Besart Abdurahimi opened on Bravo’s bench and made a late substitute appearance as he was introduced in the 3rd minute of stoppage time.

Slovenia, Prva Liga, Domžale – Olimpija 0:1
Zeni Husmani played the entire game as his team lost at home against Olimpija. In the 48th minute he was booked with a yellow card.

Spain, Primera División, Espanyol – Levante 1:3
Enis Bardhi made the start for Levante and played a big role in their win away to Espanyol. It was Enis who netted the goal for 1:2 in the 67th minute of the game.

Spain, Primera División, Mallorca – Leganés 1:1
After receiving game time the last round, this round Aleksandar Trajkovski was just an unused substitute for Mallorca.

Spain, Segunda División, Deportivo La Coruña – Rayo Vallecano 3:3
Stole Dimitrievski as usual started on goal for Rayo and conceded three goals. Late in the game Stole first saved a penalty, but the penalty was repeated as Stole was not on the line. The second penalty finished in his goal.

Sweden, Allsvenskan, Malmö – Varbergs 2:2
Daniel Krezikj opened on Varbergs’ bench and was introduced in the 58th minute. In the end his team grabbed a big point away to Swedish giants Malmö.

Sweden, Allsvenskan, Sirius – Häcken 2:2
Leonard Zhuta recently came back in Häcken after 5 years of playing out of Sweden. Right away he played the full 90 minutes for his team in the Round 3 of the new season.

Switzerland, Challenge League, Grasshoppers – Aarau 5:0
Big game for Nikola Gjorgjev who played on the left wing and had a brace as his team demolished Aarau. Nikola netted his first goal in the 32nd minute and added one more in the 57th minutes. Eventually he played the entire game.

Turkey, Süper Lig, Atiker Konyaspor – Sivasspor 2:2
Erdon Daci made a late substitute appearance for the hosts as he was introduced in the 83rd minute.

Turkey, Süper Lig, Antalyaspor – Rizespor 3:1
Adis Jahovic played until the 82nd minuted for the hosts and converted a penalty kick in the 73rd minute when he doubled the lead on 2:0.

Keepers Damjan Shishkovski and Filip Gachevski chat after FT as their teams played 0:0 on Cyprus.

After a corner kick was cleared away, Askovski got past one marker, utilized his speed and went all the way to score.

That goal gave Botosani a 1:0 lead. However, in the 2nd half, FCSB (formerly called Steaua) got two goals to win 2:1