A lot of internationals from Macedonia were active this past weekend, but only U21 NT member Marko Gjorgjievski was able to score.

photo by Emilio Andreoli: Elif (R) in action against Atalanta

Albania, Kategoria Superiore, Kukësi – Partizani 1:2
Agim Ibraimi played the first 77 minutes for the hosts, while Egzon Belica was the entire game in Partizani’s defense. His teammate Ferhan Hasani opened on the bench and was introduced late in the 90th minute.

Albania, Kategoria Superiore, Tirana – Teuta 0:1
Filip Najdovski missed this game for Tirana, his teammate Kristijan Toshevski was the entire game in defense, while RB Blagoja Todorovski helped his team Teuta to keep a clean sheet in the away win. Blagoja was also booked with a yellow card in the 39th minute. Meanwhile, Bobi Celeski spent all minutes on the bench as he was Teuta’s reserve goalie.

Azerbaijan, Premyer Liqası, Səbail – Sabah 2:0
Milovan Petrovikj played the entire game for the hosts and also received a yellow card in the 46th minute, whereas his teammate Florijan Kadriu spent the game on the bench.

Bulgaria, Parva Liga, Beroe – Slavia 1:1
Filip Antovski was all minutes at LB for Slavia, while his teammate Darko Tasevski played the last half hour. 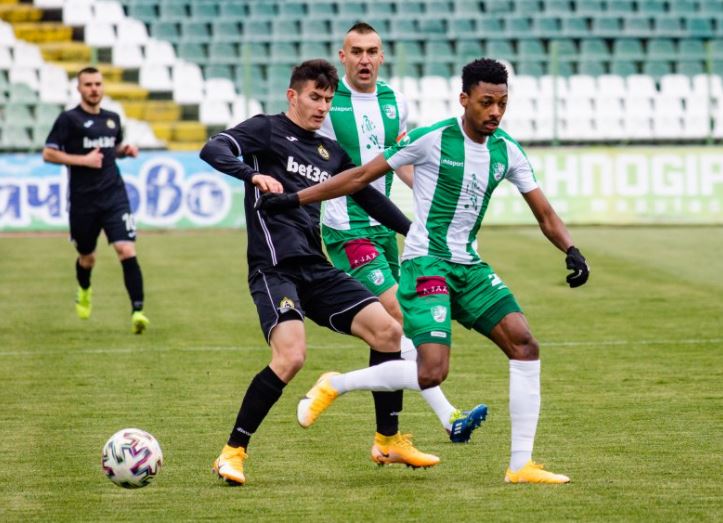 Antovski (in black) at the match; photo: PFK Slavia Sofia

Bulgaria, Parva Liga, Tsarsko Selo – Botev Plovdiv 2:2
Mite Cikarski wasn’t in the home team while Mario Mladenovski played until the 6rd when his team was losing 2:0 and he got substituted by Michel Espinosa who in the injury time scored the equalizer.

Bulgaria, Parva Liga, CSKA – Cherno More 1:0
Vlatko Drobarov was all minutes in central defense as his team lost at CSKA.

Bulgaria, Parva Liga, Arda – Botev Vratsa 3:2
Dorian Babunski played the first half for Botev as his team lost on the road. 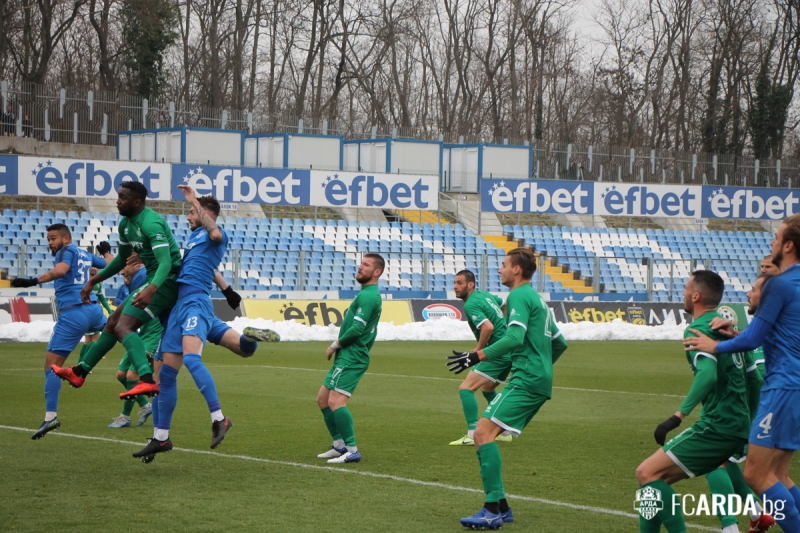 Dorian (with black-white gloves in green dress) looks on; photo by fcarda.bg

Cyprus, Protáthlima Cyta, Olympiakos – AEK 1:0
Daniel Mojsov was serving a suspension for this match, Stefan Spirovski was brought on at the beginning of the second half, while Ivan Trichkovski played the whole match for AEK.

Cyprus, Protáthlima Cyta, Anorthosis – Doxa 1:0
Darko Glishikj was on the bench for the visiting team, while his teammates Damjan Shishkovski and Dushko Trajchevski both started the match with the former playing the whole game, while the latter was taken off in the 69th minute.

Cyprus, Protáthlima Cyta, Apollon – Enosis 2:1
Filip Gachevski played the whole match for the away team, conceding 2 goals, 1 of which was from the penalty spot.

Cyprus, Protáthlima Cyta, Ethnikos – AEL 1:2
Martin Bogatinov was not in the list of called up players for this match, while his teammate Jovan Kostovski started on the bench and was introduced in the 80th minute. In the opposing team, Davor Zdravkovski played the whole match.

England, Premier League, Wolves – Leeds United 1:0
Ezgjan Alioski started on the bench and was given the final 10 minutes in this match for Leeds.

Finland, Kakkonen Cup, PEPO – Pargas 5:3 AP
Midfielder Calvin N’Sombo played the first half for PEPO as his team advanced to the next round of the cup.

France, Ligue 2, Chambly – Auxerre 0:1
Vlatko Stojanovski remained on the bench as his team noted their 4th consecutive defeat, once again dropping in the relegation play-off zone.

Germany, Bundesliga, Köln – Stuttgart 0:1
Darko Churlinov was unavailable for this match due to an injury, but at least got back in training. 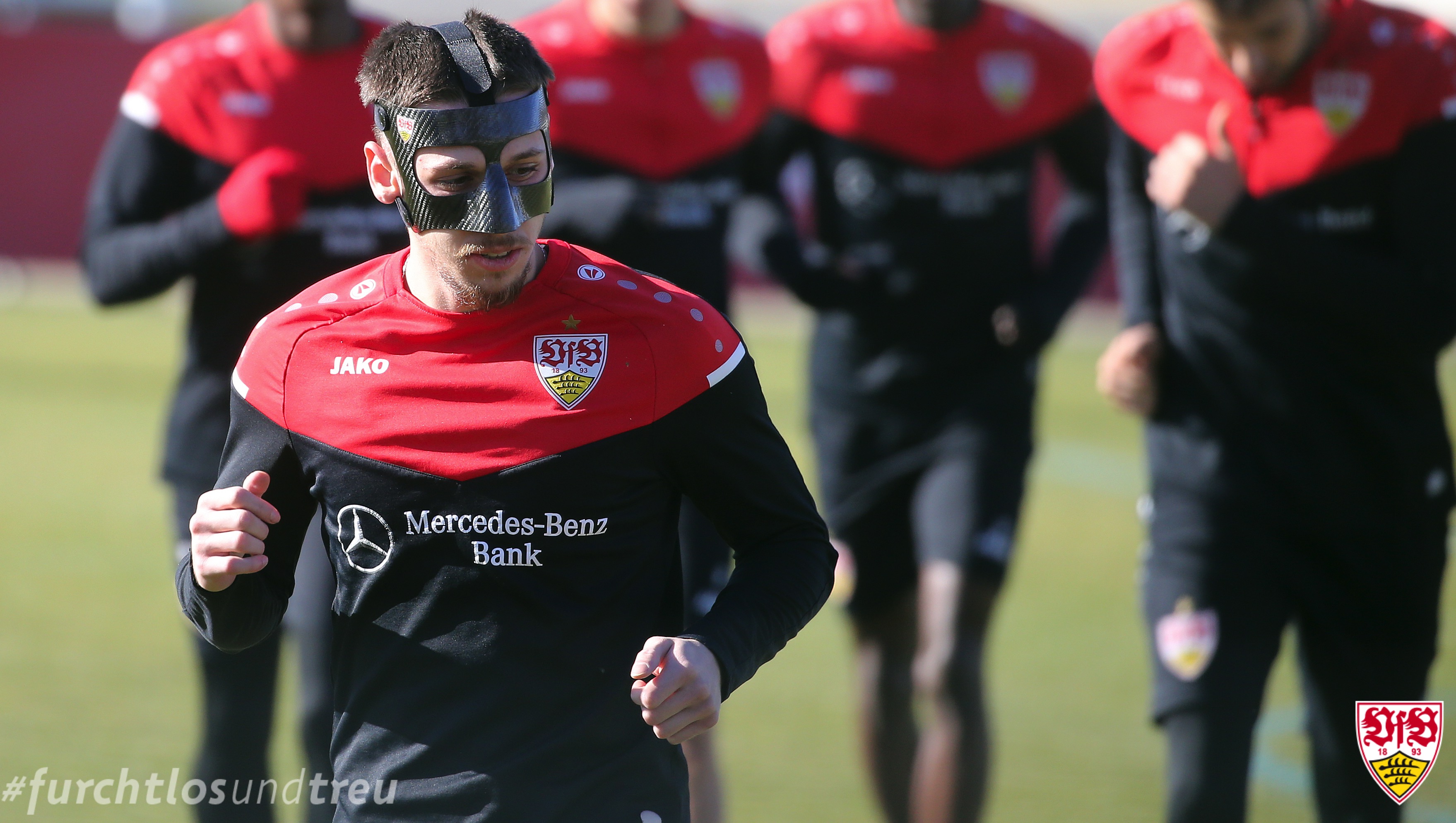 Darko training with a mack on Sunday; photo: VfB Stuttgart

Greece, Soúper Ligk, Atromitos – Larissa 1:1
Nikola Jakimovski started the game for the visitors and played until the 71st minute when he was taken off.

Italy, Serie A, Genoa – Verona 2:2
Goran Pandev played from the 67th minute as his team collected one point. The point came lucky as Goran’s team equalized in the 4th minute of тхе stoppage time.

Italy, Serie A, Atalanta – Napoli 4:2
Elif Elmas started on the left wing for Napoli and lasted 53 minutes on the pitch as his team lost away to Atalanta.

Italy, Serie A, Parma – Udinese 2:2
Udinese was two goals down at half time, but Ilija Nestorovski came off the bench directly after the break and helped his team to refresh the attack and equalize the score.

Romania, Liga I Betano, Viitorul – Poli Iași 0:0 interrupted
David Babunski was at the home bench as the match was interrupted in the 70th minute due to a dense fog.

Romania, Liga I Betano, Voluntari – Arges 0:1
Viktor Angelov began on Voluntari’s bench and was introduced after the half-time break. In the 85th minute he was booked with a yellow card.

Russia, Russian Cup, Rostov – Akhmat 0:1
David Toshevski was an unused substitute for Rostov as his team was eliminated from the cup competition.

Serbia, Linglong Tire SuperLiga, Partizan – Radnik 3:0
Zoran Danoski started the game for Radnik and played until the 60th minute when he made way for Uroš Stojanović, while his teammate Nikola Bogdanovski wasn’t summoned for this game due to an yellow card suspension.

Serbia, Prva Liga, Sloga Kraljevo – Radnički Pirot 1:1
Marko Gjorgjievski started for Radnički Pirot and played the entire game. In the 19th minute it was Marko who opened the score with a left-footed shot from inside the box.

Slovakia, Fortuna Liga, Nitra – Spartak 0:1
Milan Ristovski returned from his injury and came as a substitution for Spartak at the beginning of the second half replacing Stanislav Olejník and helped Spartak defeat Nitra, the club where Ristovski enjoyed a lot of success last year. This was Milan’s first game since September of 2020 (serious leg injury) and debut for Spartrak. 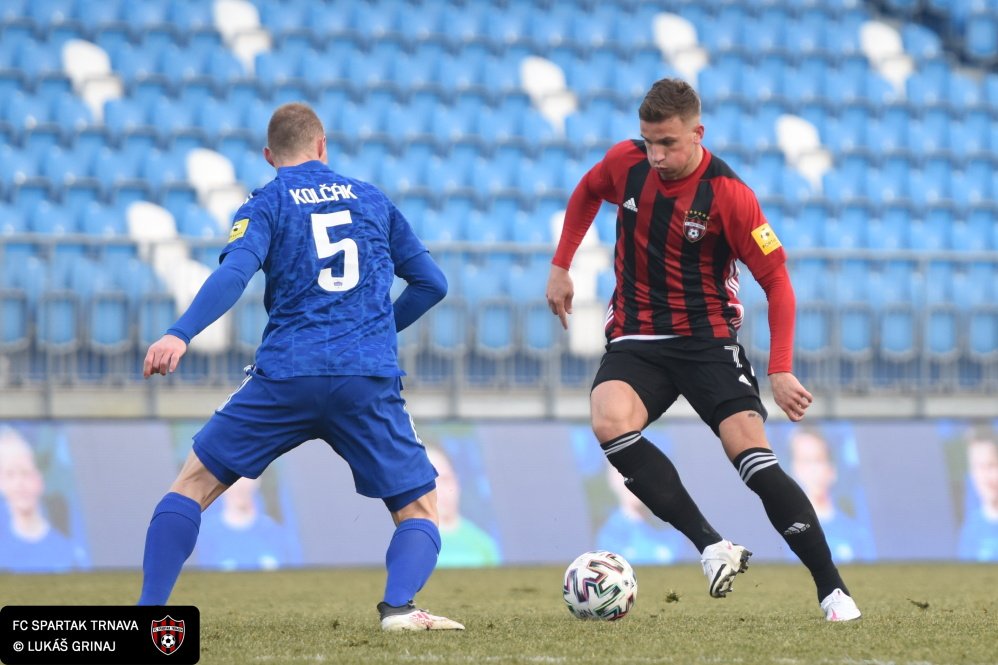 Slovakia, Fortuna Liga, ViOn Zlaté Moravce – Ružomberok 3:1
Tomche Grozdanovski played the entire match for ViON as well as Tihomir Kostadinov for Ružomberok. Kostadinov was shown a yellow card in the 21st minute of the match.

Slovenia, Prva Liga, Domžale – Tabor 2:1
Zeni Husmani played full match for Domžale and he received a yellow card in the 44th minute of the match, while his teammate Emir Saitoski stayed at the bench.