Goran Pandev netted one goal in Italy, while Mile Todorov scored a brace in the Croatian second tier

Armenia, Armenian Cup, Shirak – Alashkert 1:2
Risto Mitrevski was all minutes in central defense for Alashkert as his team moved to the next round of the Armenian Cup.

Bosnia-Herzegovina, BH Telecom Premijer Liga, Borac – Tuzla City 2:0
Boban Georgiev entered the field in the 86th minute for the hosts when all goals were already scored.

Bosnia-Herzegovina, BH Telecom Premijer Liga, Sloboda – Sarajevo 2:3
After some games without minutes Krste Velkoski this time received ten by Sarajevo as he was introduced in the 80th minute.

Bosnia Herzegovina, BH Telecom Premijer Liga, Mladost – Velež 1:2
Konstantin Cheshmedjiev started in central defense for the visitors, but had to leave the pitch in the 28th minute due to an injury.

Bulgaria, Parva Liga, Montana – Botev Plovdiv 3:1
90 minutes for Mite Cikarski as his team lost on the road at Montana. In the 55th minute Mite also received a yellow card.

Bulgaria, Parva Liga, Arda – Slavia 2:1
None of Filip Antovski and Darko Tasevski were included into the visiting squad.

Cyprus, Protáthlima Cyta, Omonia – AEK 2:1
Ivan Trichkovski and Daniel Mojsov played all minutes for AEK, whereas their teammate Stefan Spirovski missed this game due to an injury.

Cyprus, Protáthlima Cyta, Enosis – APOEL 0:2
Goalkeeper Filip Gachevski made his debut for Enosis and conceded two goals in the loss against APOEL.

Cyprus, Protáthlima Cyta, Paphos – Ethnikos 2:2
Martin Bogatinov conceded two goals in the draw away to Paphos, while his teammate Jovan Kostovski spent the entire game on the bench.

England, Premier League, Leeds United – Fulham 4:3
Ezgjan Alioski made his PL debut as he was introduced in the 70th minute. At that point all goals were already scored. 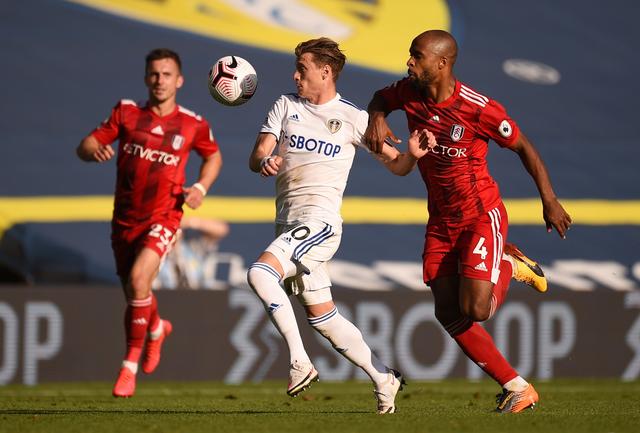 France, Ligue 2, Caen – Chambly 0:0
Vlatko Stojanovski opened on Chambly’s bench and made his first appearance for his new club after he replaced an injured teammate in the 27th minute.

Hungary, OTP Bank Liga, Diósgyör – Honvéd 2:4
Mirko Ivanovski was in the starting lineup for the home team. He earned a yellow card in the 53rd minute and stayed on the pitch until the 73rd minute. His team finished the match with nine men and ended up losing 2:4 to Honvéd.

Hungary, OTP Bank Liga, Fehérvár – Puskás Akadémia 3:1
Visar Musliu was in Fehérvár’s starting lineup and played the whole match. Boban Nikolov entered the match in the 59th minute and their team scored two goals in the last minutes for a 3:1 win over Puskás Akadémia.

Italy, Serie A, Genoa – Crotone 4:1
Goran Pandev is still doing his magic at age of 37 years and in his 17th season in the Italian Serie A. In the 9th minute of the match he accepted a pass by Edoardo Goldaniga to beat the offside trap, then showcased good speed and ball control on his run towards the goal and beat Crotone’s keeper Alex Cordaz with a nice chip. This was Pandev’s 95th career goal in the Serie A. Interestingly, Cordaz and Pandev played together for Inter in the season 2001/02 and won the Primavera youth league. Previously, Pandev took part in the opening goal. He made a beautiful curling pass to Paolo Ghiglione who then sends a low cross to Matteo Destro for a tap-in goa.

Norway, Eliteserien, Sarpsborg 08 – Mjondalen 2:0
David Mitov Nilsson kept a clean sheet for Sarpsborg in the 2:0 win over Mjondalen. He had one save as the visitors had practically no shots.

Romania, Liga I Betano, Botoșani – Academica Clinceni 0:0
David Babunski was in Botoșani’s starting lineup and played until the 73rd minute, while Stefan Ashkovski entered the home team’s squad in the 60th minute.

Serbia, Linglong Tire SuperLiga, Vojvodina – Radnik 2:0
Both Zoran Danoski and Nikola Bogdanovski were in Radnik’s starting lineup away to Vojvodina, but they weren’t able to help their team avoid the defeat and were both replaced in the 68th minute.

Slovakia, Fortuna Liga, Ružomberok – Zemplín 4:0
Tihomir Kostadinov is still recovering from an injury, thus he didn’t play for the hosts in this game.

Slovakia, Fortuna Liga, Pohronie – Sereď 2:2
Filip Duranski was all minutes in defensive midfield for Sereď as his team grabbed one point away to Pohronie. In the 1st minute of the first half’s stoppage time he also received a yellow card.

Spain, Segunda División, Espanyol – Mallorca 0:0
Aleksandar Trajkovski didn’t make Mallorca’s matchday squad. Rumors say that Aleks is close to a move to Turkey, so maybe that was the reason he was not called up.

Turkey, Süper Lig, Gençlerbirliği – Konyaspor 0:0
Erdon Daci wasn’t called up by the visitors for this game.

COVID cases are surging all over Europe, including in Italy and Spain.

New tough restrictions are being put in place.

We have a lot of key players based in those two countries.

What if a travel ban is put in place?

You can't ignore that possibility. The big unknown with COVID