Adis Jahovic, Edis Malikji and Krste Velkoski netted one goal apiece for their respective teams, Nikola Gjorgjev celebrated a brace in the Swiss Cup, while Aleksandar Trajkovski and Vlatko Stojanovski made their debut in La Liga and Ligue 1.

Albania, Super Cup, Partizani – Kukësi 4:2 aet
Egzon Belica was all minutes in defense for Partizani, whereas Besnik Ferati was on the bench. For Kukësi Edis Malikji started and collected a yellow card in the 43rd minute, while his teammate Tome Kitanovski opened on the bench. In the 35th minute Malikji netted the 1:1 equalizer, but in the end after extra time Partizani won the Super Cup of Albania.

Azerbaijan, Topaz Premyer Liqası, Səbail – Zira 1:0
Daniel Bozhinovski was an unused substitute for the hosts as he served as the reserve goalie.

Bosnia Herzegovina, BH Telecom Premijer Liga, Velež – Široki Brijeg 1:0
Kosta Manev was all minutes on the pitch for the hosts and was part of a defense that kept a clean sheet, while his teammate Yani Urdinov didn’t make the matchday squad.

Bulgaria, Parva Liga, CSKA – Arda 3:2
Darko Glishikj played the entire game for Arda as his team lost away to CSKA.

Croatia, Hrvatski Telekom Prva Liga, Rijeka – Osijek 1:1
Darko Velkovski made his first start this season for Rijeka and played the whole game, while Todor Todoroski and Mile Todorov didn’t make the visitors matchday squad as both youngsters played 90 minutes each for Osijek II in the Croatian second tier.

France, Ligue 1, Nîmes – Nice 1:2
Vlatko Stojanovski had a notable debut in the French league. He entered the match in the 68th minute and after one of his attempted crosses, Dante blocked the ball with his hand in the box, but the referee didn’t award Nîmes a penalty and this probably cost them a point.

Vlatko Stojanovski and the possible penalty after his cross; photo: Nîmes Olympique FC

Germany, Bundesliga, Wolfsburg – Köln 2:1
Teenager Darko Churlinov made his Bundesliga debut after coming in instead of Florian Kainz in the 70th minute. At that moment his team was losing 2:0.

Darko waits to get in

Portugal, Liga NOS, Sporting – Braga 2:1
Stefan Ristovski is still out of Sporting’s squad because of illness.

Serbia, Linglong Tire SuperLiga, Voždovac – Javor 2:1
Aleksa Amanovikj was in the starting lineup and played the whole match for Javor, while Marko Gjorgjievski entered the match and played from the 57th minute.

Serbia, Linglong Tire SuperLiga, Mladost – Radnički 1:1
Aleksandar Todorovski played the whole match for the away team and earned a yellow card in the 45th minute.

Slovakia, Fortuna Liga, Senica – Ružomberok 2:2
Tihomir Kostadinov opened on the visitors right wing and played all minutes in the draw away to Senica.

Slovakia, Fortuna Liga, Sereď – Slovan 0:4
Dejan Iliev was on goal for Sereď and conceded four goals in the loss against Slovan.

Spain, Primera División, Mallorca – Eibar 2:1
Aleksandar Trajkovski made his debut in Spain as he was introduced by Mallorca in the 74th minute. Just one minute later his team netted the game winner through a converted penalty.

Sweden, Allsvenskan, Hammarby – Sundsvall 3:0
David Mitov Nilsson was all minutes on goal for Sundsvall and conceded three goals in the loss away to Hammarby.

Switzerland, Pokal Schweiz, Seefeld – Grasshoppers 1:9
Nikola Gjorgjev started for the visitors and scored two goals as his team demolished lower division side Seefeld in a cup match. First Nikola opened the score in the 11th minute, later in the 47th minute Gjorgjev netted his teams third goal. Thanks to this win Grasshoppers advanced to the next round.

Turkey, Süper Lig, Konyaspor – Ankaragücü 0:0
Leonard Zhuta wasn’t called up by the hosts, while his teammate Erdon Daci opened on the left wing and played the entire game.

Turkey, Süper Lig, Malatyaspor – Başakşehir 3:0
Good start for Adis Jahovic in the new season as the center-forward played the entire game for Malatyaspor and netted his teams second goal in the 87th minute.

Turkey, 1.Lig, Karagümrük – Bursaspor 3:1
Jani Atanasov played all minutes in central defensive midfield for Bursaspor as his team lost away to Karagümrük. There were talks that the club doesn’t count anymore on Jani, but he nevertheless played and had a good game despite the loss. 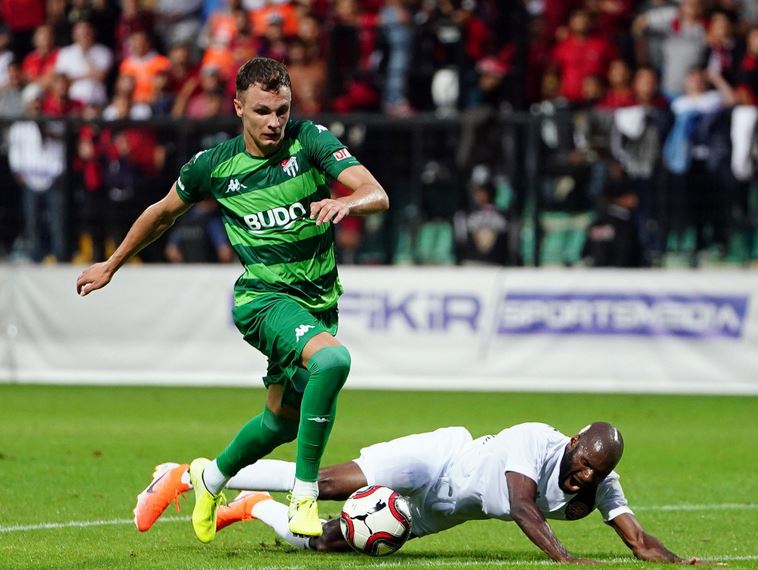 Atanasov in action during the game; photo: Bursaspor KD

What a perfect second half, stand out player was Alioski for me. So consistent and has ridiculous work rate, can’t help but love him. #LUFC

#Udinese have confirmed the sale of defender Nicholas Opoku to #AmiensSC from #Ligue1. #SerieA
https://www.football-italia.net/149391/opoku-leaves-udinese