Goran Pandev with an assist and a goal gave Juventus the first Serie A defeat this season, Ilija Nestorovski exploded for Palermo by scoring a brace and assisting, Aleksandar Trajkovski provided an assist as well, Muzafer Ejupi scored his first goal since his comeback, Ferhan Hasani assisted for a winning goal.

photo by Genoa CFC: Pandev celebrates after scoring against Juve

Albania, Kategoria Superiore, Laçi – Flamurtari 0:0
Both internationals from Macedonia, Bojan Najdenov for the hosts and Artim Polozhani for Flamurtari, were starters for their respective teams. In the end, the game ended without goals.

Albania, Kategoria Superiore, Partizani – Teuta 3:0
Egzon Belica started for Partizani and was part of a defense that kept a clean sheet, while Bobi Celeski served as Teuta’s reserve goalkeeper.

Azerbaijan, Topaz Premyer Liqası, Səbail – Qarabağ 1:2
Tome Kitanovski was a starter for the hosts as his team suffered a loss at home against Qarabağ.

Bosnia-Herzegovina, BH Telecom Premijer Liga, Sarajevo – Krupa 0:0
Krste Velkoski began on the left wing for Sarajevo and lasted 75 minutes on the pitch. Eventually, the game ended in a goalless draw.

Bosnia-Herzegovina, BH Telecom Premijer Liga, Mladost – Radnik 0:3
Djelil Asani started at left-back for Mladost and played all minutes on the loss against Radnik.

Bulgaria, Parva Liga, Ludogorets – Septemvri 6:0
Darko Glishikj played the full game for the visitors as his Septemvri stood no chance against the league leaders Ludogorets who won 6:0. Septemvri has now conceded 13 goals in the last 3 rounds!

Bulgaria, Parva Liga, Slavia – Etar 0:1
Stefan Ashkovski started on the left wing for Slavia and played for 68 minutes, while Darko Tasevski did not make the squad for this encounter.

Croatia, Hrvatski Telekom Prva Liga, Gorica – Dinamo 1:2
Arijan Ademi remains out of the squad by Dinamo as he is still recovering from his surgery.

Croatia, Hrvatski Telekom Prva Liga, Inter – Istra 3:1
Agron Rufati did not get summoned by Istra for this encounter against Inter.

Croatia, Hrvatski Telekom Prva Liga, Rijeka 3:1
Muzafer Ejupi scored his first goal after his comeback, having scored only 6 minutes after entering the game in the 76th minute. However, the goal was not enough to defeat Darko Velkovski and Milan Ristovski‘s Rijeka who won 3:1. Velkovski played the whole game while Ristovski entered the match in the 89th minute.

Cyprus, Protáthlima Cyta, NEA Salamis – AEK 1:0
Daniel Mojsov played the full game for AEK while his teammate Ivan Trichkovski remains sidelined due to his injury. Because of the injury Trichko had to withdraw from the national team for the upcoming qualifiers.

Cyprus, Protáthlima Cyta, Omonia – AEL 3:1
Davor Zdravkovski made the start for AEL and got substituted in the 84th goal after Omonia’s second goal that put them in a 2:1 lead.

Cyprus, Protáthlima Cyta, Alki – Doxa 1:4
Dushko Trajchevski played the full game for the hosts who suffered a heavy 1:4 defeat to Doxa. Trajchevski also got booked in the 86th minute.

England, Championship, Leeds United – Sheffield United 0:1
Ezgjan Alioski played another full game for Leeds United as they lost 0:1 to their direct promotion rivals Sheffield United. Its a devastating defeat for his team. Ezgjan got really mad in the 83rd minute when accused of a dive. He then gave a slight shove in the back to the accuser Chris Basham. After the game, he got into it with more Sheffield players. 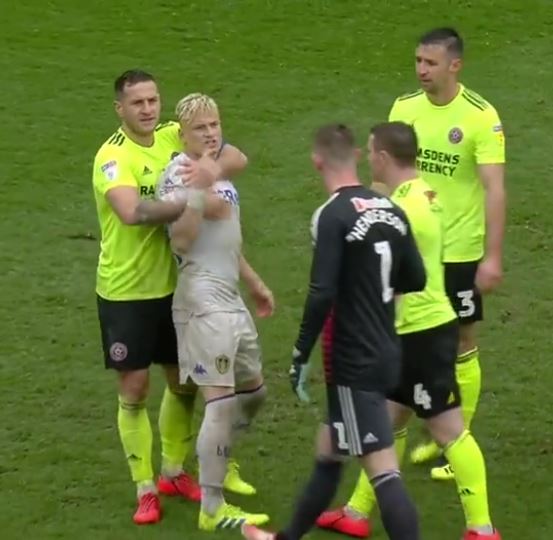 Alioski had to be hold in order to stay calm

Finland, Suomen Cup, Haka – RoPS 0:1
Damjan Shishkovski played the whole match for the winning team. He managed to keep a clean sheet and helped his team advance to the next round of the Finnish Cup.

Greece, Souroti Soúper Lígka, Giannina – Larissa 0:0
Nikola Jakimovski played the whole match for the visiting side, while Davor Taleski still hasn’t made the breakthrough to the squad. Larissa managed to hold to a goalless draw against relegation rivals as they played the last 16 minutes of the game with a player less.

Hungary, OTP Bank Liga, Ferencváros – Haladás 2:0
Despite back in training, Stefan Spirovski is still not fit to play. He also had to withdraw from the national team for the upcoming qualifiers.

Hungary, OTP Bank Liga, Újpest – Kisvárda 1:0
Kire Ristevski was not part of the matchday squad for the winning side.

Hungary, OTP Bank Liga, Vidi – Mezőkövesd 1:0
Boban Nikolov was brought on in the 84th minute of the match for the hosts.

Israel, Ligat Winner, Hapoel Haifa – Beitar 0:0
Risto Mitrevski was one of the best players on the pitch, which led to a praise on the club official website. Unfortunately, his club missed out on playing in the promotion round of the Israeli league and will play in the relegation group. 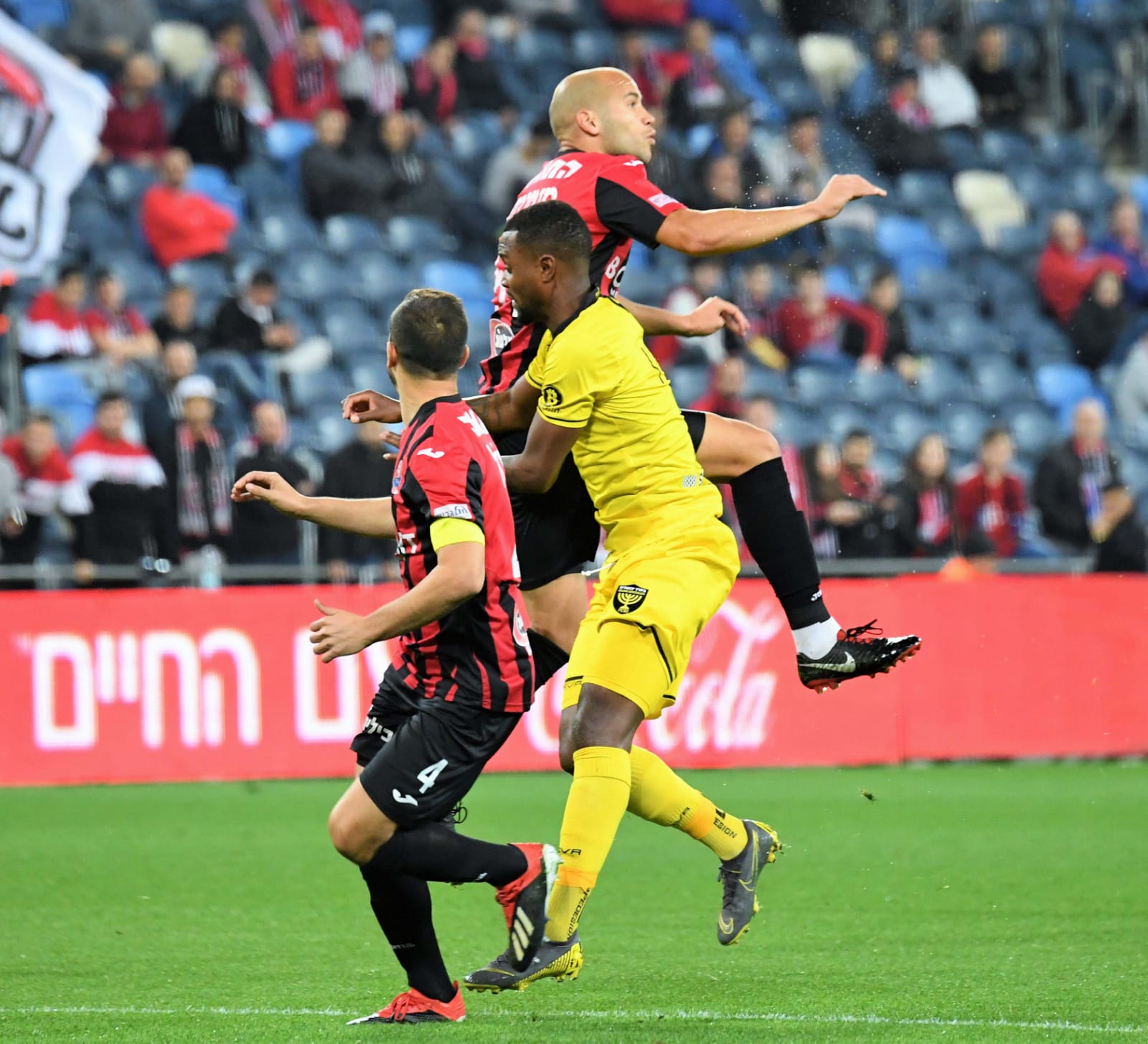 Italy, Serie A, Genoa – Juventus 2:0
Goran Pandev continues to be a nightmare for Juventus. He was brought on in the 60th minute of the game and was crucial in leading his team to a win which was actually Juve’s first defeat of the season. First, Pandev provided an assist to the opening goal scored by Sturaro in the 72nd minute and then went on to grab himself a goal in the 82nd minute. For the goal, Pandev made a run from inside his box and fired a powerful shot. Watch his assist and goal in the video below.

Italy, Serie B, Palermo – Carpi 4:1
Aleksandar Trajkovski and Ilija Nestorovski were vital in their team’s win over Carpi. Especially Nestorovski played an amazing match, creating one goal and scoring two more. Trajkovski provided the assist on his side’s third goal. Check out the goals and assist by Macedonians in the video below as our duo took part in all of Palermo’s goals.

Netherlands, Erste Divisie, Dordrecht – Roda 3:2
Antonio Stankov played the whole match for the hosts. His side celebrated a close win over his former club Roda. Stankov actually started his career in Roda.

Spain, Primera División, Villarreal – Rayo Vallecano 3:1
Stole Dimitrievski was Rayo’s starting goalkeeper and conceded three goals in his team’s road loss. He stood no chance in each of the goals his teammates in the back line were really bad in the three occasions. This was Rayo’s seventh consecutive loss!

Switzerland, Raiffeisen Super League, Sion – Grasshoppers 2:0 abandoned
Nikola Gjorgjev wasn’t part of Grasshoppers squad at this match. The match was abandoned due to spectators riot. The Grasshoppers fans were interrupting the match several times so the referee decided for the safety of the players to blow the final whistle in the 55th minute. Sion is expecting a 3:0 green table win.

Turkey, Süper Lig, Bursaspor – Galatasaray 2:3
Jani Atanasov wasn’t summoned by the home side. Instead he played for the U21 team in the 1:1 against Galatasaray. 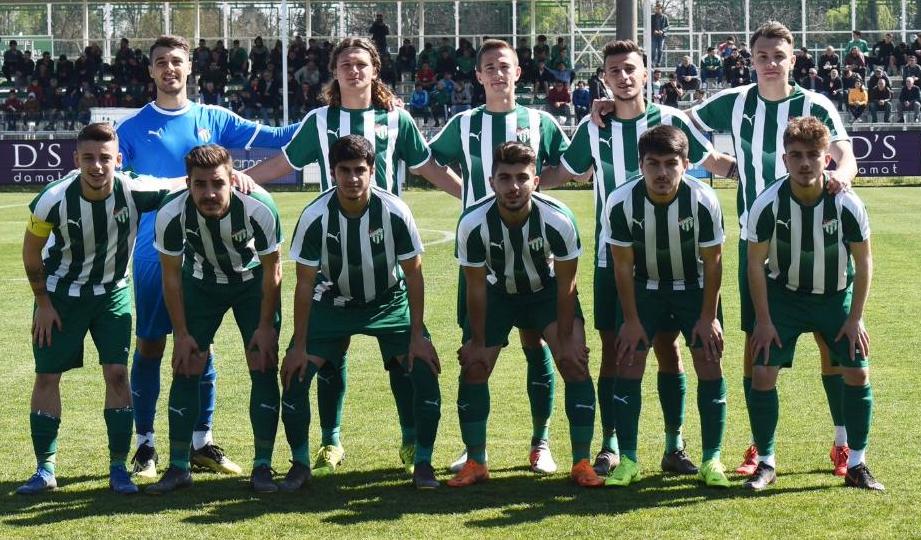