Ivan Trichkovski celebrated a brace against his former club, Tihomir Kostadinov scored a goal and provided an assist, Ilija Nestorovski and Antonio Stankov each scored a goal, Enis Bardhi and Aleksandar Trajkovski assisted for their clubs, while Adis Jahovic was sent off.

photo by MFK Ružomberok: Tihomir Kostadinov is being brought down by a ViOn player

Albania, Kategoria Superiore, Flamurtari – Skënderbeu 2:0
Artim Polozhani made the start for Flamurtari and was 90 minutes part of a defense that kept a clean sheet in the win against Skënderbeu.

Albania, Kategoria Superiore, Teuta – Kukësi 2:1
Bobi Celeski spent all minutes on Teuta’s bench as the reserve goalkeeper, while on the other side Edis Malikji and Ardian Cuculi were the entire game part of the visitors defense. Moreover Cuculi received a yellow card for a foul in the 68th minute.

Albania, Kategoria Superiore, Laçi – Partizani 1:0
Bojan Najdenov opened on Laçi’s bench and played from the 71st minute, whereas Egzon Belica began in central defense for Partizani. Eventually, Bojan’s team won thanks to an early goal scored in the 13th minute.

Belgium, Proximus League, Leuven – Westerlo 3:0
Jovan Kostovski is not anymore in the plans of Leuven’s coach, thus he wasn’t called up once again.

Bulgaria, Parva Liga, Etar – Dunav Ruse 3:0
Aleksandar Isaevski immediately made the starting lineup in his first game for his new club Dunav Ruse. He lasted 55 minutes on the pitch when was substituted by Romanian international Dragoș Firțulescu. At the moment of substitution, the score was 1:0.

Bulgaria, Parva Liga, Botev Plovdiv – Slavia 1:0
Both Stefan Ashkovski and Darko Tasevski made the starting lineup for the visitors. Ashkovski lasted 78 minutes on the field playing on the right wing, while Tasevski got substituted in the stoppage time to make room for the reserve goalkeeper after Slavia’s starting goalie Emanuele Geria received a red card in the 89th minute.

Croatia, Hrvatski Telekom Prva Liga, Dinamo – Slaven Belupo 3:0
Arijan Ademi was left out from the squad for this weekend’s game against Slaven Belupo.

Croatia, Hrvatski Telekom Prva Liga, Osijek – Istra 1:0
Muzafer Ejupi is still awaiting his comeback by Osijek after his long absence due to an injury, whereas Agron Rufati spent the entire game at the bench for the visiting team.

Croatia, Hrvatski Telekom Prva Liga, Rijeka – Hajduk 0:0
Milan Ristovski made his debut for Rijeka this season by entering the game in the 2nd minute of the stoppage time, while his teammate Darko Velkovski remained the entire game on the substitutes bench. On the other side, Mirko Ivanovski was once again sidelined from Hajduk’s squad due to an injury. 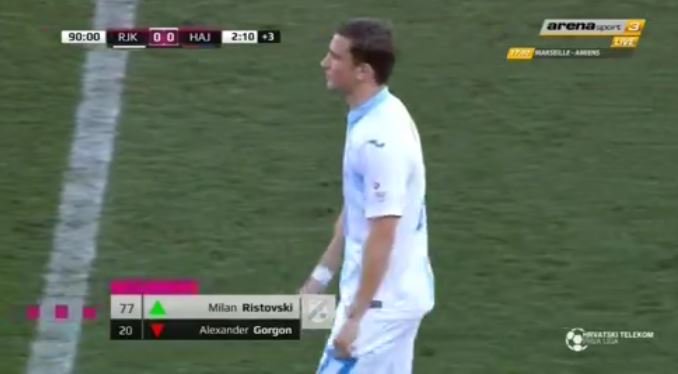 Cyprus, Protáthlima Cyta, APOEL – AEK 2:2
Ivan Trichkovski played the whole match for the visiting side and scored both goals against his former side APOEL. Trichko did not celebrate his goals out of respect for his former club. Despite his goals, APOEL managed to get back in the game with goals scored in 83rd and 85th minute. Daniel Mojsov was not in the squad for AEK.

Cyprus, Protáthlima Cyta, AEL – Nea Salamis 3:2
Davor Zdravkovski played the whole match for the home team. He has been an important part of AEL this season and his club are currently on the second place of the table.

Finland, Suomen Cup, RoPS – SJK 3:2
Damjan Shishkovski was between the posts for the winning team. He has saved a penalty at the beginning of the match and reports from Finland say that he was one of the best players on the pitch.

Greece, Souroti Soúper Lígka, Larissa – Xanthi 1:1
Nikola Jakimovski started the game for the hosts and played until 54th minute when he was taken off.

Hungary, OTP Bank Liga, Debrecen– Ferencváros 2:1
Stefan Spirovski from the away team is still out with an injury.

Hungary, OTP Bank Liga, MTK – Vidi 1:3
Boban Nikolov started the match on the bench and was brought on in the 63rd minute, just a minute after the hosts have scored their only goal of the game.

Hungary, OTP Bank Liga,  Puskás Akadémia – Újpest 0:1
Kire Ristevski played the whole match for the winning side. He was shown a yellow card in the second half.

Israel, Ligat Winner, Bnei Yahuda – Hapoel Haifa 4:2
Risto Mitrevski was not part of the away team’s squad for the game.

Italy, Serie A, Genoa – Lazio 2:1
Goran Pandev replaced Ivan Radovanović in the 56th minute against his former team and at that moment Lazio had a 0:1 lead. Genoa equalized in the 75th minute and managed to make a full turnover and win the match with a goal in the 93rd minute. Pandev won multiple corners after running at defenders. One of those corners led to the first Genoa goal. He then came close to scoring in the 84th minute, before trying to win a penalty in the 90th minute (given a yellow for diving). Still, he was active and all over.

Italy, Serie B, Palermo – Brescia 1:1
Ilija Nestorovski had a great come-back after the injury that took him out for two months. Nestorovski entered the match in the 76th minute and only three minutes later he scored after a corner taken by Aleksandar Trajkovski. This was Nestorovski’s 7th goal for Palermo this season. Eventually Brescia managed to equalize with a last minute goal and kept the lead in the Italian Serie B.

Nestorovski’s goal after the assist by Trajkovski:

Netherlands, Erste Divisie, Dordrecht – Sparta Rotterdam 1:4
Antonio Stankov played the whole match as captain of Dordrecht and scored the only goal for his team from a penalty in the 31st minute.

Romania, Liga I Betano, Voluntari – Dunărea 0:0
Filip Gligorov was left out of Dunarea’s squad on this match because of an injury.

Romania, Liga I Betano, Gaz Metan Medias – Sepsi 0:1
Marko Simonovski wasn’t included in Sepsi’s squad as he is out with an injury.

Saudi Arabia, Dawri Al-Muhtarifin Al-Saudia, Al-Ra’ed – Al-Ittihad 1:1
Ferhan Hasani entered the match in the 60th minute when Al-Ra’ed had the lead, but his team conceded a late goal in the 92nd minute.

Serbia, SuperLiga, Proleter – Radnik 0:0
Zoran Danoski entered the play in the 66th minute for the Surdulica visitors in the scoreless draw away to Proleter.

Slovakia, Fortuna Liga, Ružomberok – ViOn 4:0
Both Tihomir Kostadinov and Yani Urdinov featured the entire 90 minutes for the hosts but unfortunately did not play against Tomche Grozdanovski who remained an unused sub for the visitors. It was Kostadinov who broke the dead lock after 16 minutes of play scoring his 5th seasonal goal. Later in the 59th minute he assisted to Zinedin Mustedanagić for the third goal. ViOn is Tihomir’s former side.

Slovakia, Fortuna Liga, Žilina – Spartak 1:1
Enis Fazlagikj wasn’t part of the home squad while newcomer Kire Markoski debuted for the visitors by coming from the bench in the 72nd minute instead of Václav Dudl. His team conceded three minutes from time.

Spain, Primera División, Rayo Vallecano – Atlético 0:1
Stole Dimitrievski was between the home post and got defeated once. In the 74th minute a deflected shot from Antoine Griezmann went past Stole. His team surprised the Madrid visitors by outplaying them, but they have nothing to show for it after losing by a lone goal.

Sweden, Svenska Cupen Group 2, Norrköping – Värnamo 3:1
David Mitov Nilsson was the reserve keeper for Norrköping. For the visiting team, Ivan Andonovski entered as late sub six minutes from time. The season in Sweden officially started with the first round of the Swedish Cup group stage.

Sweden, Svenska Cupen Group 4, Hammarby – Varbergs 3:0
Daniel Krezic entered the game in the 64th minute as first change in the visiting squad. It was 1:0 at the time.

Sweden, Svenska Cupen Group 4, Eskilsminne – Dalkurd 0:2
Alex Simovski started on the home bench and got a chance to play since the 66th minute. He as well was first change and his team was also one goal down.

Switzerland, Raiffeisen Super League, Grasshoppers – Xamax 0:1
Nikola Gjorgjev played almost the entire match as he was taken off for Cédric Zesiger. His team lost at home by Xamax which resulted into falling to the last place. It is the 6th defeat in a row for Grasshoppers. 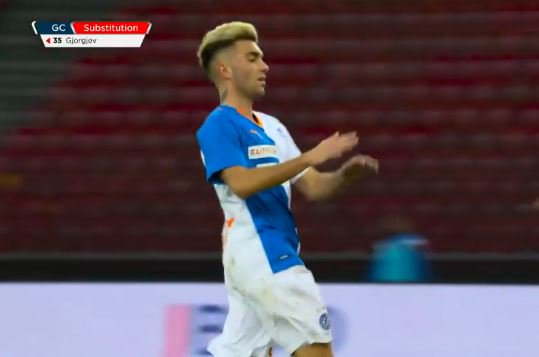 Gjorgjev reacts during the game

Turkey, Süper Lig, Fenerbahçe – Konyaspor 1:1
Elif Elmas hosted Adis Jahovic and Leonard Zhuta. Elmas came in in the 83rd minute instead Jailson, while Jahovic and Zhuta started. Adis got a direct red card after just 33 minutes for stepping on Sadık Çiftpınar, while Leonard played the whole match. Zhuta could have gotten an injury in the 13th minute when Martin Škrtel made a nasty tackle on him.

Leonard being fouled by Škrtel:

Din Alomerovic, a former youth NT player for 🇲🇰, has joined Real Balompédica Linense (🇪🇸 third division). He moves there after a brief stint at Rabotnicki.

DA, who is now 23, has plenty of ties to 🇪🇸 (has formerly played for Fuenlabrada, Celta Vigo youth, Salamanca and La Nucia)

David Tosevski signs for FC Rostov in Russia from Rabotnicki.