Kire Markoski scored an injury time goal, Ezgjan Alioski and Ferhan Hasani recorded one assist each, Antonio Stankov was unlucky to score an own goal, Stefan Ristovski played the Portuguese derby as not many internationals were active this weekend.

Australia, Hyundai A-League, Melbourne Victory – Newcastle United Jets 2:1
Daniel Georgievski faced his former side and played 73 minutes as Angus Thurgate took his place when the score was 1:0. He picked up a yellow card in the 53rd minute and three minutes later had a great scoring chance but his shot was tipped over the crossbar by the home keeper. Danny was also voted a Jets player of the month for December.

Belgium, Proximus League, Roeselare – Beerschot Wilrijk 1:2
Emil Abaz started on the visiting bench and got a chance to play from the 74th minute taking the place of Moroccan winger Tarik Tissoudali. All goals were already scored.

Cyprus, Protáthlima Cyta, AEK – Ermis 2:2
Daniel Mojsov stayed at the home bench while Ivan Trichkovski wasn’t in the squad due to injury.

Cyprus, Protáthlima Cyta, Alki – AEL 1:3
Dushko Trajchevski played until the 56th minute for the home side. Aikel Gadacha Charrad substituted him while the score was 0:2. For the visitors, Kire Markoski got a chance late in the 83rd minute taking the place of veteran Alex da Silva, while Davor Zdravkovski wasn’t summoned. Kire cemented the win with a goal in the 3rd minute of the stoppage time.

England, Championship, Leeds United – Derby County 2:0
After two consecutive losses, Leeds got back in the winning column with a 2:0 triumph over Derby County. Ezgjan Alioski started at left back due to an injury to Barry Douglas. Gjanni played the entire match and was fantastic in his new role. Very active. Just a great showing by him. And he assisted to Jack Harrison for the goal that cemented the win.

Greece, Souroti Soúper Lígka, Larissa – Apollon Smyrnis 3:0
Nikola Jakimovski played the full 90 minutes as left back for his new side Larissa who outplayed visiting Apollon. His new teammate Davor Taleski wasn’t in the squad as he just signed. 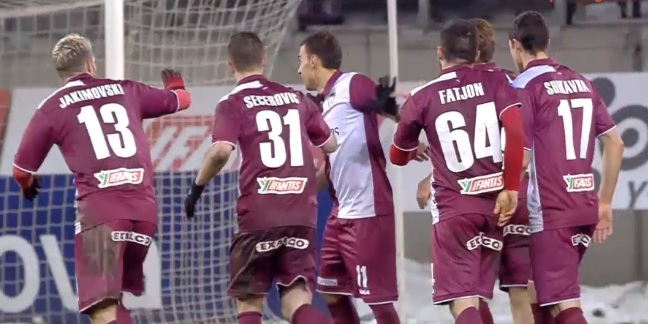 Nikola (L) celebrates one of the goals with his teammates; photo: PAE AEL

Greece, Souroti Soúper Lígka, Giannina – AEK 0:4
Mite Cikarski watch the game from the bench as his teammates got smashed right in the opening half.

Malta, BOV Premier League, Balzan – Birkirkara 0:0
Kristijan Naumovski kept a clean sheet at this road game. It’s the 7th match in 14 rounds as he doesn’t concede this season. His Birkirkara is currently sixth with 9 points away from the top.

Netherlands, Eerste Divisie, Dordrecht – Den Bosch 2:6
Captain Antonio Stankov played the whole game for the hosts who could not match the table leaders. Stankov scored in the 69th minute, but an own goal, the sixth for the visitors. He could not do anything as the ball simply hit him and went into the net. His Dordrecht lies at the bottom of the table, but luckily there is no relegation from the Dutch second league.

Portugal, Liga NOS, Sporting – Porto 0:0
Stefan Ristovski started the big derby at the home bench. Just two minutes into the second half he got a chance to play as Bruno Gaspar got injured. Stefan lost his starting spot to Gaspar once he got injured. Now, he could regain it if the Gaspar injury is significant.

Saudi Arabia, Dawri Al-Muhtarifin Al-Saudia, Al-Hilal – Al-Ra’ed 1:1
Ferhan Hasani and Al-Ra’ed recorded a hard fought point in the 1:1 draw away to Al-Hilal, the top ranked club in Saudi Arabia. Both goals came in stoppage time of the 90th minute. The Al-Ra’ed equalizer came after Hasani’s corner kick was headed home by Mazen Abo Shararah. Interesting fact, the Saudi league isn’t on a break despite their national team is participating at the AFC Asian Cup with a squad full of domestic based players. 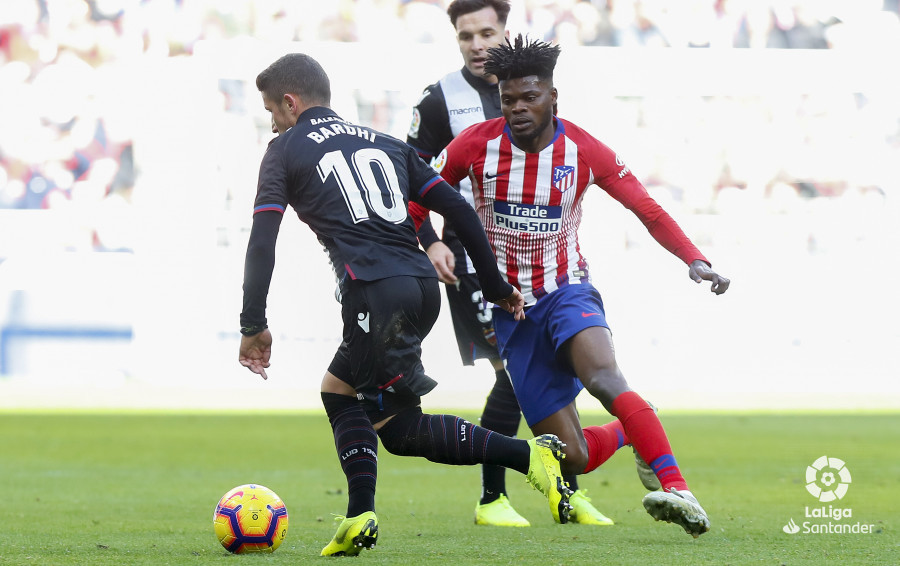 Spain, Primera División, Rayo Vallecano – Celta 4:2
Stole Dimitrievski and Rayo continued their good form with a 4:2 win over Celta. Rayo now has 4 wins in their last six La Liga matches. Stole played the full 90 minutes and conceded one goal on a penalty (got a piece, but it still went past him) and the other on a close range effort. Not at fault for either.

On what is his 29th birthday today, Arijan Ademi scored on a header following a corner kick in a friendly between Dinamo Zagreb and Inter Zapresic

The league season in Croatia will resume next weekend, while cup action there (where Dinamo was eliminated) will resume this weekend