Enis Bardhi scored to bring an important win that kept Levante in the LaLiga, Ilija Nestorovski scored, assisted to Aleksandar Trajkovski and got injured, Goran Pandev and Boban Nikolov also scored, while Stefan Ristovski was sent-off.

Albania, Kategoria Superiore, Luftëtari – Kukësi 3:2
As usual, Ardian Cuculi made the starting lineup for Kukësi and went on to play the full match, while his teammate Edis Malikji did not make the matchday squad.

Belgium, Jupiler Pro League UEL Group, Beerschot Wilrijk – Charleroi 0:3
Gjoko Zajkov played yet another full game for Charleroi and helped them keep another clean sheet, this time against Emil Abaz‘s Beerschot Wilrijk. For the hosts, Emil was once again not included in the squad. 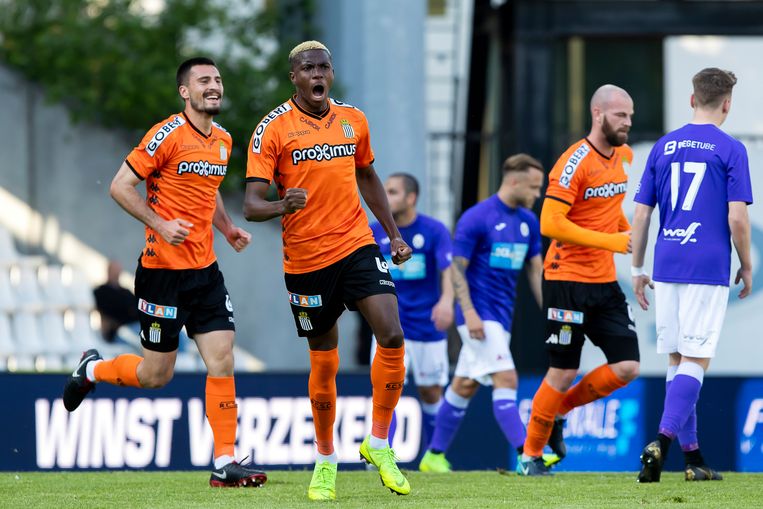 Bulgaria, Parva Liga UEL play-offs, Slavia – Botev (V) 1:0 (a.e.t.)
Darko Tasevski started at the bench for Slavia and entered the game in the 63rd minute. The game ended with the same result as the first round – 0:0, which lead to extension time in which Slavia managed to score a penalty goal to help them advance to the semi-finals of the European play-offs.

Croatia, Hrvatski Telekom Prva Liga, Rijeka – Dinamo 0:0
Darko Velkovski returned in Rijeka’s squad after recovering from his injury, but he did not get any playing time as he spent the entire game on the bench. His teammate Milan Ristovski was not summoned for this encounter, while Arijan Ademi remained sidelined by Dinamo as he is still injured. It is still unclear how long will Ademi be abstaining and whether he will return to action before the upcoming national team’s fixtures in June.

Croatia, Hrvatski Telekom Prva Liga, Gorica – Istra 4:1
Agron Rufati seemed to be the player to pay the price for the 7 conceded goals in the last round, as he was now removed from the squad for this weekend’s encounter. However, that didn’t seem to help much as Istra’s defense still had a tough time conceding 4 goals to Gorica.

Cyprus, Protáthlima Cyta play-off, Apollon – AEK 1:2
Neither Ivan Trichkovski nor Daniel Mojsov made the matchday squad for AEK (the first one due to an injury) in their away win against Apollon.

Cyprus, Protáthlima Cyta play-out, Alki – Anorthosis 1:0
Dushko Trajchevski was once again a starter for Alki and played the entire game.

England, Championship play-off, Derby County – Leeds United 0:1
Ezgjan Alioski is still recovering from his injury and was not able to help Leeds United in the first round of the promotion play-offs against Derby County. His team still got an important away win in the first (away) match and will be looking forward to advance to the final stage of the play-off. 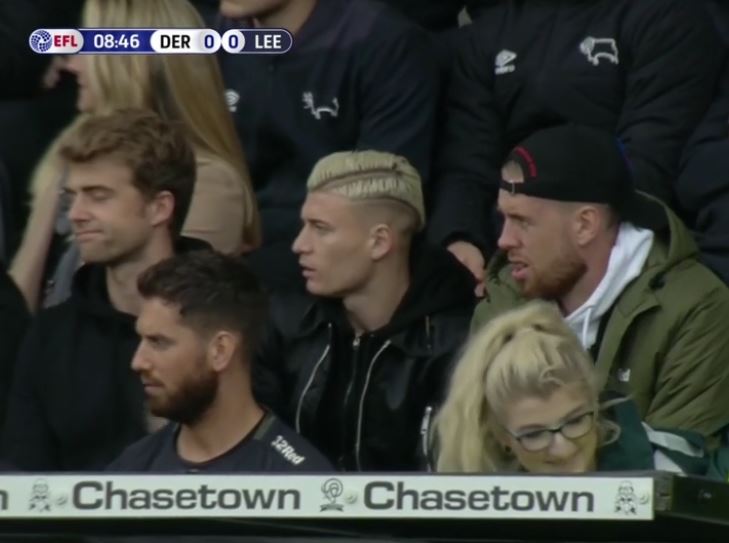 Ezgjan (C) watching the match from the stands

Finland, Veikkausliiga, KPV – Lahti 0:0
Filip Ivanovski remained on the bench for the home team during the goalless draw against Lahti.

Finland, Veikkausliiga, RoPS – Ilves 0:1
Damjan Shishkovski was on the bench as Spanish keeper Reguero was given the chance once again, third time in a row already.

Hungary, OTP Bank Liga, Ferencváros – Debrecen 2:1
Stefan Spirovski is still out with an injury. He won’t be able to join the national team as things stand.

Hungary, OTP Bank Liga, Újpest – Puskás Akadémia 0:1
Kire Ristevski played the whole match for the home team who lost an important game at home. His side is now on a 5-match no-win run leading to jeopardize the third place on the table. There is one more round to go in the Hungarian top flight.

Hungary, OTP Bank Liga, Vidi – MTK 4:2
Boban Nikolov played the whole match for Vidi and scored for a 2:1 lead in the 64th minute.

Israel, Ligat Winner, Ashdod – Hapoel Haifa 1:0
Risto Mitrevski played the whole match for the visiting side. This round put an end to the Israeli championship and Mitrevski’s side steered clear from relegation.

Italy, Serie A, Atalanta – Genoa 2:1
Goran Pandev entered the game in the 50th minute instead Lukas Lerager and went on to score a goal for his side but it came too little, too late. Genoa are on a very bad run, their last win came against Juventus 8 rounds ago and in the following games only won 3 points. Their next game against Cagliari at home is of huge importance for them since they might be threatened with relegation.

Italy, Serie B, Palermo – Cittadella 2:2
Aleksandar Trajkovski and Ilija Nestorovski both scored goal apiece. Nestorovski first scored in the 21st minute and two minutes later assisted on Trajkovski’s goal, but that wasn’t enough for a win over Citadella. Palermo ended the regular season on the third place and will have to look for promotion to Serie A through the play-offs where in the two-legged semifinal they will play against the better of the duel between Verona and Spezia. The bad news here is that Nestorovski has suffered a calf muscle strain and it remains to be seen how long will he be absent. He didn’t even played the full match as he had to be substituted with George Pușcaș four minute before the break.

Netherlands, Eredivisie, Heracles – Excelsior 4:5
Denis Mahmudov was unavailable for selection due to an injury in this crazy win for his side.

Netherlands, Erste Divisie, Dordrecht – Jong Utrecht 1:2
Antonio Stankov played the whole match for the home team. This was the last round in the Dutch second league and Stankov’s team ended on the 17th place out of 20 teams.

Portugal, Liga NOS, Sporting – Tondela 1:1
Stefan Ristovski was in the starting lineup for Sporting, but was sent off in the 37th minute for pushing an opponent to the ground. This was Ristovski’s third red card this season and later he issued an apology for his teammates and the Sporting fans.

Romania, Liga I Betano, Poli Iași – Dunărea 4:0
Filip Gligorov played the whole match for the guests, but wasn’t able to help his team avoid the defeat away to Poli Iași.

Romania, Liga I Betano, Sepsi – Steaua 1:5
Marko Simonovski missed another match for Sepsi because of an injury.

Serbia, SuperLiga play-out, Zemun – Radnik 2:1
Milosh Tosheski came in for Zemun at the beginning of the second half, while Zoran Danoski entered the match in the 81st minute for Radnik.

Slovakia, Fortuna Liga play-off, Zemplín – Ružomberok 0:3
Tihomir Kostadinov started in midfield for Ružomberok and played till the 80th minute when he was replaced by Matúš Kmeť while his teammate Yani Urdinov didn’t play at this game.

Spain, Primera División, Rayo Vallecano – Real Valladolid 1:2
Stole Dimitrievski got back between Rayo’s posts and he conceded two goals in his team’s home defeat. He conceded an early goal via penalty kick and then a late goal on a shot from the edge of the area.

Spain, Primera División, Girona – Levante 1:2
Enis Bardhi played full game for Levante and he scored the winner for his team in the 86th minute which was his third goal in LaLiga this season. Bardhi was also shown a yellow card at 49th minute of the game. Huge late goal to give Levante the 2:1 lead at Girona. With this a win Levante has definitely avoided relegation. Big time finish by Bardhi to rescue Levante.

Switzerland, Raiffeisen Super League, Luzern – Grasshoppers 4:0 abandoned
Nikola Gjorgjev wasn’t part of Grasshoppers squad at this match. The match was abandoned due to spectators riot. The Grasshopers fans, not satisfied of their team getting relegated, interrupted the match in the 70th minute and forced their players to hand over the jerseys therefore the refferee decided to blow the final whistle of the match. Luzern is expecting a green table win.

Turkey, Süper Lig, Fenerbahçe – Akhisarspor 2:1
Elif Elmas played untill 83th minute for Fenerbahçe when he made way for German international Tolgay Arslan. Elmas was also booked at 79th minute of the game meaning that he will miss the next game due to yellow cards ban.

Ukraine, Prem’yer-liha Playout, Arsenal – Chornomorets 3:3
Stefan Jevtoski continues to out of Arsenal’s squad due to injury.