Darko Tasevski and David Babunski scored one goal each, Nikola Jakimovski assisted, Stefan Ashkovski won a penalty, Ilija Nestorovski also won a penalty but then went to miss it, Yani Urdinov committed a penalty foul and got sent off, while Stole Dimitrievski was unable to stop the mighty Barcelona.

Bosnia-Herzegovina, BH Telecom Premijer Liga, Široki Brijeg – Sarajevo 0:3
Krste Velkoski captained Sarajevo in this win on the road at Široki Brijeg. Krste played the entire game as his team won thanks to three goals in a span of just eleven minutes in the second half. Velkoski had a couple of decent chances but couldn’t score but still put in a solid display.

Bosnia-Herzegovina, BH Telecom Premijer Liga, Mladost – Zrinjski 0:0
Left-back Djelil Asani started for Mladost and was 90 minutes part of a defense that kept a clean sheet in the goalless draw against Zrinjski.

Bulgaria, Parva Liga, Septemvri – Slavia 1:2
In an encounter that involved three Macedonian players, the Slavia duo Darko Tasevski and Stefan Ashkovski played the key role this match. At first Ashkovski brought a penalty for Slavia in the 8th minute which was converted into 0:1 lead by Chunchukov. Later on in the second half, Tasevski turned to be the man of decision by scoring the winning goal in the 67th minute. Darko got substituted nine minutes after his goal, while Stefan lasted 63 minutes on the pitch. For the home side, Darko Glishikj played the full game as left back.

Bulgaria, Parva Liga, Lokomotiv – Dunav Ruse 4:1
Aleksandar Isaevski played the entire game for the visitors as a right back, and also got booked in the 66th minute.

Croatia, Hrvatski Telekom Prva Liga, Istra – Gorica 0:3
Agron Rufati did not get summoned by Istra for this match.

Croatia, Hrvatski Telekom Prva Liga, Dinamo – Rijeka 3:1
Darko Velkovski played the full game for Rijeka while his teammate Milan Ristovski spent the entire match at the bench. For the home side, Arijan Ademi remains to be sidelined due to his upcoming surgery. Darko was rusty out there and looked pretty bad. The second goal, in particular, saw his marker out-muscle him in the air for a headed goal. He has a long way to go in order to regain his form from several years back.

Croatia, Hrvatski Telekom Prva Liga, Osijek – Lokomotiva 1:1
After 11 months of absence due to injury, Muzafer Ejupi finally made his comeback for Osijek by playing the last 7 minutes of the game against Lokomotiva.

Cyprus, Protáthlima Cyta, APOEL – AEK 0:0
Daniel Mojsov played the full game for AEK and helped them keep a clean sheet away against APOEL. Meanwhile, his teammate Ivan Trichkovski remains to sidelined due to an injury.

Cyprus, Protáthlima Cyta, Alki – Ermis 2:1
Dushko Trajchevski played the full 90 minutes for the hosts and also got booked in the 71st minute.

England, Championship, Bristol City – Leeds United 0:1
Ezgjan Alioski played another full game for Leeds United as left back. He also played part in the lone goal of the game as he sent an accurate long ball towards Ayling, who then easily set up Patrick Bamford for the goal.

Greece, Souroti Soúper Lígka, Larissa – Levadiakos 2:0
Nikola Jakimovski was brought on in the 73rd minute of the game instead of Leozinho and ten minutes later he provided an assist to the second goal of his side. His teammate Davor Taleski was not listed on the matchday squad.

Hungary, OTP Bank Liga, Haladás – Újpest 3:2
Kire Ristevski played the whole match for the visiting side and was shown a yellow card in the 72nd minute. His side were up by two after the first 45 minutes but lost the game eventually after conceding three goals in just six minutes!

Hungary, OTP Bank Liga, Paks – Vidi 2:2
Boban Nikolov was brought on in the 63rd minute instead of Máté Pátkai for Vidi.

Hungary, OTP Bank Liga, MTK – Ferencváros 1:3
Stefan Spirovski is back in training after the injury but is still not ready to play.

Israel, Ligat Winner, Hapoel Haifa – Hapoel Ra’anana 2:2
Risto Mitrevski was on the bench for the hosts.

Italy, Serie A, Parma – Genoa 1:0
Goran Pandev only played the final 10 minutes of the game and did not have enough time to make an impact.

Italy, Serie B, Venezia – Palermo 1:1
Ilija Nestorovski played the whole match, while Aleksandar Trajkovski was substituted with Stefano Moreo in the 77th minute. Their Palermo was 1:0 down when Nestorovski was brought down in the box in the 71st minute, but then he failed to convert the penalty as the home keeper read him well.

Japan, Meiji Yasuda J2 League, Tokushima Vortis – Ōmiya Ardīja 0:1
David Babunski decided the winner after firing a great shot from around 25 meters in the 70th minute. He played almost the entire match as two minutes before the end Masato Kojima took his place. It was his first mach this season as in the opening two rounds he sat on the bench.

Netherlands, Eredivisie, Venlo – Excelsior 1:0
Denis Mahmudov was brought on in the 77th minute for Ali Messaoud while his side was chasing the result, but he was unable to change things.

Netherlands, Erste Divisie, Telstar – Dordrecht 1:0
Antonio Stankov captained Dordrecht until the 83rd minute when he was substituted for striker Thomas Schalekamp as his team wanted an equalizer. Previously, he was shown a yellow card in the 52nd minute.

Portugal, Liga NOS, Boavista – Sporting 1:2
Stefan Ristovski was in the starting lineup and played the whole match for Sporting. His team converted a controversial penalty in the stoppage time for a 2:1 win away to Boavista.

Romania, Liga I Betano, Hermannstadt – Gaz Metan 0:2
There wasn’t a Macedonian clash in Romania as Besart Abdurahimi wasn’t included in the home squad, same as Mite Cikarski for the visitors.

Serbia, SuperLiga, Radnički – Mladost 1:0
Aleksandar Todorovski played the whole match for Radnički and his team continued their great form with another victory.

Serbia, SuperLiga, Crvena zvezda – Zemun 4:0
Milosh Tosheski entered the match after the half time break, but wasn’t able to help his team avoid the defeat away to to the holders and table leaders.

Slovakia, Fortuna Liga, Sereď – Spartak 3:1
Kire Markoski played the first half for Spartak as during the break he made way for Brazilian international Lucas Lovat.

Spain, Primera División, Levante – Villareal 0:2
Enis Bardhi had a decent game and looked dangerous at times but unfortunately his Levante conceded two goals in stoppage time and lost the match. Both goals came after Bardhi was substituted in the 83rd minute when Nikola Vukčević took his place.

Sweden, Svenska Cupen, Häcken – GAIS 4:1
Predrag Randjelovic started for GAIS and got substituted at the half-time by Serbian international Nikola Aščerić. His team was 1:0 down at the time. This is the last game for Predrag in the Swedish Cup as GAIS got eliminated in the quarter-finals.

Switzerland, Raiffeisen Super League, Grasshoppers – Young Boys 0:1
Nikola Gjorgjev wasn’t part of the home team’s squad at this game. Grasshoppers fired the coach that fielded Nikola in four consecutive games so the new coach is probably the reason why he is not in the squad for second match in a row.

Turkey, Süper Lig, Başakşehir – Fenerbahçe 2:1
Elif Elmas started in midfield for Fenerbahçe and played just the first 45 minutes. Mehmet Ekiçi took his place in the second half for tactical reason. Fener lost away to the table leaders and are now just 2 points above the relegation zone. 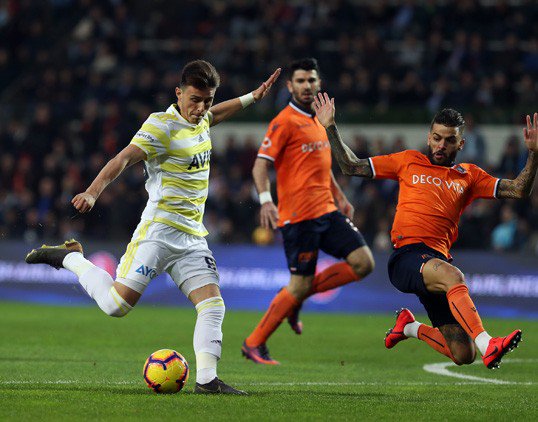 Elis attempts a shot during the game; photo: Fenerbahçe SK

Turkey, Süper Lig, Beşiktaş – Konyaspor 3:2
Leonard Zhuta was unused substitute for Konyaspor while his teammate Adis Jahovic didn’t play because of the injury he picked up while being fouled for penalty in the previous round.