Albania, Kategoria Superiore, Flamurtari – Laçi 1:0
Goran Siljanovski and Artim Polozhani started for Flamurtari, while Muhamed Useini didn’t play. On the other side Marjan Altiparmakovski opened on the bench and was introduced in the 77th minute, whereas his teammate Bojan Najdenov didn’t play because of an injury.

Albania, Kategoria Superiore, Kukësi – Skënderbeu 1:0
Edis Malikji and Ardian Cuculi were starters for the hosts and helped their team to keep a clean sheet in the big win against Skënderbeu.

Albania, Kategoria Superiore, Teuta – Partizani 1:1
Bojan Gjorgievski played all minutes at right-back, while his teammate Bobi Celeski served as Teuta’s reserve goalkeeper. For the visitors Egzon Belica played the entire game in central defense and also received a yellow card for a foul in the 52nd minute, while Besnik Ferati wasn’t called up.

Australia, Hyundai A-League, Newcastle United Jets – Brisbane Roar 2:0
Daniel Georgievski started at right-back for Newcastle and played the whole match. In the 1st minute of the first half’s stoppage time Daniel delivered the assist for the opener scored by Kaine Sheppard. His team added one more in the second half and thus collected three points against Brisbane.

Azerbaijan, Topaz Premyer Liqası, Səbail – Qəbələ 0:0
Tome Kitanovski made the start for the hosts and played the entire game. In the 55th minute Tome was also booked with a yellow card.

Belgium, Jupiler Pro League, Anderlecht – Charleroi 1:1
Gjoko Zajkov finally got a chance in the starting lineup for Charleroi and played the full 90 minutes in the draw against Anderlecht. 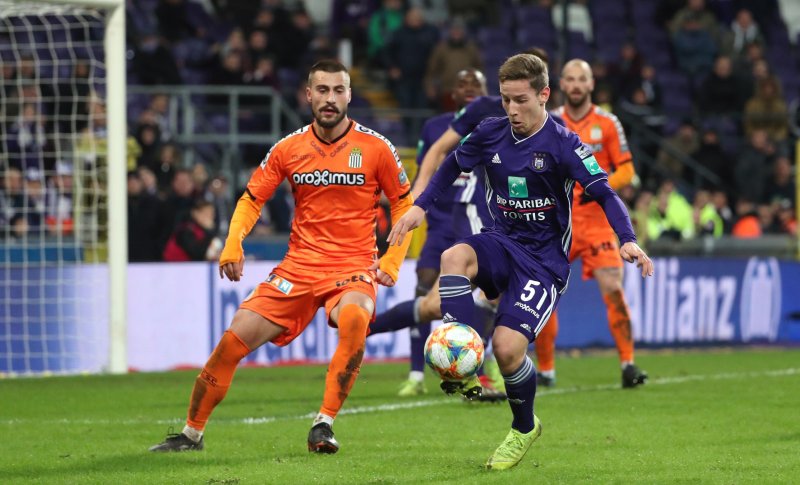 Belgium, Proximus League, Beerschot Wilrijk – Tubize 5:2
Emil Abaz finally got some playing time for Beerschot Wilrijk after entering the game in the 73rd minute, and already four minutes later he provided an assist for the host’s fourth goal.

Bulgaria, Parva Liga, Septemvri – Dunav 2:1
Darko Glishikj was relegated to the bench for Septemvri in this weekend’s match against Dunav.

Bulgaria, Parva Liga, Ludogorets – Slavia 2:0
Stefan Ashkovski watched the entire game from the bench as his Slavia got defeated by the League leaders Ludogorets. His teammate Luka Nakov did not make the squad.

Croatia, Hrvatski Telekom Prva Liga, Inter – Dinamo 0:2
Arijan Ademi was spared from this weekend’s match against Inter, as coach Bjelica wanted to rest him for the upcoming Europa League encounter against Anderlecht.

Croatia, Hrvatski Telekom Prva Liga, Hajduk – Istra 3:1
Mirko Ivanovski entered the game off the bench in the 59th minute and went on to score the final goal of the game to bring Hajduk a 3:1 victory. For the visitors, Agron Rufati played the full game.

Croatia, Hrvatski Telekom Prva Liga, Gorica – Osijek 1:2
Muzafer Ejupi continues to be sidelined by Osijek due to his injury.

Croatia, Hrvatski Telekom Prva Liga, Rijeka – Lokomotiva 3:0
Leonard Zhuta was back in action for Rijeka and played the full 90 minutes, while his team-mate Darko Velkovski is still sidelined due to an injury.

Cyprus, Protáthlima Cyta, Paphos – AEK 1:0
Ivan Trichkovski played the whole match for the visiting side, while Daniel Mojsov is still out with an injury. The busy schedule for AEK with Europa League games in midweek seems to catch up with the team and they now have two consecutive defeats in the domestic championship.

Cyprus, Protáthlima Cyta, Alki – Omonia 0:2
Dushko Trajchevski started the match for the hosts but had to be replaced in the 38th minute as he suffered an injury. It remains to be seen how serious was the injury and how long will he be absent.

England, Championship, Leeds United – Queens Park Rangers 2:1
Ezgjan Alioski played the whole match for the winning side. This was Leeds’ fourth consecutive win and they are sitting well in the promotion zone at the moment.

Greece, Souroti Soúper Lígka, Asteras Tripolis – Giannina 1:0
Mite Cikarski remained on the bench for the visitors in a match they lost in the 90th minute.

Hungary, OTP Bank Liga, Újpest – Vidi 2:0
In the Macedonian derby in Hungary Kire Ristevski played the whole match for the hosts in defense, while Boban Nikolov was introduced in the 55th minute.

Israel, Ligat Ha’Al, Hapoel Raanana – Hapoel Haifa 0:3
Risto Mitrevski played the whole match for the winning side and was part of a defense which kept a clean sheet.

Italy, Serie A, Genoa – Spal 1:1
Goran Pandev spent the whole match on Genoa’s bench for substitute players. It was the first game for Genoa under newly appointed Cesare Prandelli with whom Pandev worked in Galatasaray in the autumn of 2014.

Italy, Serie B, Padova – Palermo 1:3
Aleksandar Trajkovski and Ilija Nestorovski kept Palermo on the top of Serie B. The hosts took the lead in the 30th minute, but in the 42nd minute Palermo equalized with a goal by Trajkovski assisted by Nestorovski. In the second half Palermo scored another goal and in the 70th minute Nestorovski netted his sixth goal this season and sealed the victory for Palermo.

Netherlands, Eredivisie, PSV – Excelsior 6:0
Denis Mahmudov played the whole match for Excelsior and his team helpless to avoid the heavy defeat away to PSV.

Portugal, Liga NOS, Sporting – Aves 4:1
Stefan Ristovski is still out because of injury.

Romania, Liga I Betano, Poli Iași – Dunărea 1:0
Filip Gligorov wasn’t included in the away team’s squad on this match.

Romania, Liga I Betano, Sepsi – Botoșani 0:1
A his team was one goal down Marko Simonovski was introduced at half-time at the place of defender Adrián Rus but still the score remained unchanged.

Serbia, SuperLiga, Mačva – Radnik 1:2
Zoran Danoski was in the starting lineup for Radnik and was booked early in the 4th minute and played until the 60th minute.

Serbia, SuperLiga, Radnički – Spartak 3:0
Aleksandar Todorovski played the whole match for the home team and assisted the first goal in the 8th minute.

Serbia, SuperLiga, Zemun – Mladost 0:3
Milosh Tosheski was in the starting lineup for Zemun and was shown a yellow card in the first half. In the 73rd minute he was replaced by the other Macedonian international in Zemun, Dushan Savic.

Slovenia, PrvaLiga Telekom Slovenije, Domžale – Krško 2:1
Agim Ibraimi wasn’t in the home squad. For the visitors, Milan Ristovski started and played until the 81st minute when Stephen Wiredu substituted him just a minute after Domžale scored for 2:0, while his teammate Medin Bajrami remained at the bench.

Slovenia, PrvaLiga Telekom Slovenije, Gorica – Olimpija 1:3
Daniel Avramovski continues to be left out of the league matches. This season he still hasn’t played a single game in the Slovenian top flight for Olimpija.

Spain, Primera División, Eibar – Levante 4:4
Enis Bardhi spent the entire 90 minutes on field for Levante in this highly entertaining match. He assisted for his team’s first goal in the 9th minute when José Morales equalized on 1:1.

Spain, Primera División, Real Betis – Rayo Vallecano 2:0
Stole Dimitrievski played the entire match and got beaten twice with the first goal being from the spot.

Turkey, Süper Lig, Trabzonspor – Konyaspor 3:0
Adis Jahovic played the full 90 minute but could not help his team avoid a defeat.

Stefan Ristovski starts for Sporting as they face Braga in the cup!