Goran Pandev scored a fantastic goal, earned a penalty but also a red card, Milan Ristovski scored a goal and missed a penalty, Stefan Ashkovski, Marko Gjorgjievski, Ezgjan Alioski, Jovan Kostovski each scored a goal, Enis Bardhi provided an assist, while Egzon Belica has put one into his own net.

Albania, Kategoria Superiore, Tirana – Kukësi 1:3
Right back Edis Malikji played the full game for the visitors who defeated Tirana by 1:3. Meanwhile, his teammate Tome Kitanovski was not in the squad as he was recently reported to have left the club after the devastating earthquakes in Albania the past week.

Albania, Kategoria Superiore, Bylis – Partizani 2:1
Egzon Belica played the 90 minutes for Partizani and he opened the score in the 6th minute with an own goal. Bylis left back Edison Ndreca took a shot which eventually deflected from Belica and ended up in the back of his own net. Partizani went on to equalize 20 minutes later, but Bylis scored one more goal in the second halftime to record a 2:1 win. Egzon’s teammate Besnik Ferati did not get summoned for this match.

Albania, Kategoria Superiore, Teuta – Skënderbeu 1:0
Right back Blagoja Todorovski played another full game for Teuta, while his teammate Bobi Celeski was once again the backup goalkeeper. For the visiting side, center back Artim Polozhani also played the full 90 minutes whereas Agon Elezi entered the game from the bench in the 81st minute. Teuta won the game with a lone goal scored in the additional time.

Albania, Kategoria Superiore, Luftëtari – Vllaznia 0:2
Filip Gligorov made the start for Vllaznia and lasted 60 minutes on the field, whereas Aleksandar Ristevski spent the entire match on the visitors bench. Vllaznia recorded a 0:2 victory with both goals coming in the final 5 minutes of the match.

Austria, Bundesliga, Rapid – Austria 2:2
Adrian Hajdari made his debut for the first team of Rapid, and that in the big Viennese derby against Austria. The 19 years old right back entered the game right after the halftime break, at which point Rapid was down 1:2 but they managed to score an equalizer in the second half. Hajdari was also summoned by coach Blagoja Milevski for the last U21 qualifiers.

Bosnia-Herzegovina, BH Telecom Premijer Liga, Zvijezda 09 – Sarajevo 1:1
Krste Velkoski made the start for Sarajevo and played for 73 minutes. The result at the time of his substitution was 1:0 for Zvijezda 09, but only 4 minutes later Sarajevo managed to equalize to 1:1 which ended up being the final score of the match.

Bosnia-Herzegovina, BH Telecom Premijer Liga, Tuzla City – Široki Brijeg 1:0
Viktor Angelov played the full 90 minutes for the visitors but he failed to help them score as his Široki Brijeg suffered a minimal loss to Tuzla City.

Bosnia Herzegovina, BH Telecom Premijer Liga, Željezničar – Velež 0:2
Kosta Manev played the full game for the visitors and helped them keep a clean sheet in the 0:2 away win to Željezničar. Meanwhile his teammate Yani Urdinov did not make the squad for this encounter. After the game, Bosnian media praised Manev for his performances this season, stating that he showed himself as one of the best center backs in the league. 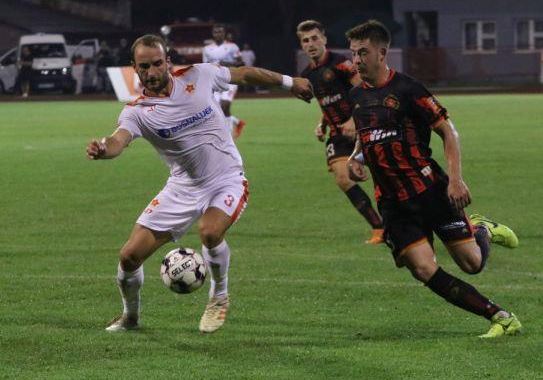 Manev with the ball; photo: sportsport.ba

Bulgaria, Parva Liga, Dunav Ruse – Lokomotiv 0:3
Aleksandar Isaevski made another start for Dunav Ruse and got taken out in the 60th minute, only 11 minutes after he got booked.

Bulgaria, Parva Liga, Botev (V) – Slavia 0:2
Darko Tasevski made the start and played for 56 minutes in the win against Botev from Vratsa.

Croatia, Hrvatski Telekom Prva Liga, Dinamo – Varaždin 1:0
Arijan Ademi served as captain as he played the entire match in the minimal win against Varaždin. Interestingly the coach decided to field Ademi as a center back for this game, instead of his usual position as a defensive midfielder.

Croatia, Hrvatski Telekom Prva Liga, Osijek – Lokomotiva 4:0
Once again Todor Todoroski and Mile Todorov did not make Osijek’s squad as they were both left to play for the club’s second team.

Croatia, Hrvatski Telekom Prva Liga, Rijeka – Istra 2:0
Darko Velkovski finally returned in action for Rijeka as he entered the game against Istra in the 66th minute. For the opponents, Agron Rufati remained an unused substitute.

Croatia, Hrvatski Telekom Prva Liga, Gorica – Slaven Belupo 2:0
Muzafer Ejupi watched from the bench as his club lost 2:0 away to Gorica. Both teams finished the game with 10 players on the pitch.

Cyprus, Protáthlima Cyta, Apollon – AEK 3:1
Both Daniel Mojsov and Ivan Trichkovski played the whole match for the visiting side. Mojsov was shown a yellow card in the second half. This was AEK’s third defeat in a row.

Cyprus, Protáthlima Cyta, Anorthosis – AEL 2:0
Davor Zdravkovski played 61 minutes before he was taken off, while Kire Markoski remained on the visitors’ bench.

Cyprus, Protáthlima Cyta, Omonia – Doxa 2:0
Dushko Trajchevski remained on the bench for the away team.

Cyprus, Protáthlima Cyta, Ethnikos – Enosis 2:2
Martin Bogatinov, Bojan Markoski and Jovan Kostovski all started the match for the home team. Jovan Kostovski scored the equalizing goal for the hosts, while Bogatinov had to leave the game in the 66th minute following a muscle injury. It remains to be seen how long will he be out. For the opposing team, Risto Mitrevski started on the bench and was introduced in the 73rd minute.

England, Championship, Huddersfield – Leeds United 0:2
Ezgjan Alioski was back in the starting line-up for Leeds, played the whole match and scored an amazing volley goal, helping his team get the 6th win in a row.

France, Ligue 1, Nîmes – Lyon 0:4
Vlatko Stojanovski was not included in the matchday list for the home team.

Hungary, OTP Bank Liga, Újpest – Kisvárda 1:0
Kire Ristevski played the whole match for the home team and was part of a defense which kept clean sheet.

Hungary, OTP Bank Liga, Fehérvár – Paks 0:2
Both Visar Musliu and Boban Nikolov started the match for the home side. Musliu played up to the 85th minute when he made space for an attacker, while Nikolov played the whole match.

Hungary, OTP Bank Liga, Mezőkövesd -Diósgyör 0:1
Mirko Ivanovski played 90 minutes before he was taken off, right after his team scored the only goal of the match.

Israel, Ligat Ha’Al, Hapoel Hadera – Hapoel Tel-Aviv 0:1
Stefan Spirovski returned to Hapel Tel-Aviv’s first team squad after a month away because of an injury and played the whole match.

Italy, Serie A, Lecce – Genoa 2:2
Goran Pandev had an excellent first half and terrible finish. In the 31st minute Pandev scored one of the best goals in his career, lobbing the goalkeeper from 40 meters which is the longest range goal scored in the Serie A this season. Just before the break Pandev won a penalty which was converted by Domenico Criscito for 0:2 lead for Genoa on half-time. In the second half Genoa had one player sent off, conceded two goals and then in the 77th minute Goran Pandev was sent off as he was shown two yellow cards in the span of just four minutes (the first one for diving and the second for a foul).

Italy, Serie A, Udinese – Napoli 1:1
Both Ilija Nestorovski and Elif Elmas were substitutes for their teams and didn’t get a chance to face each other on this match. 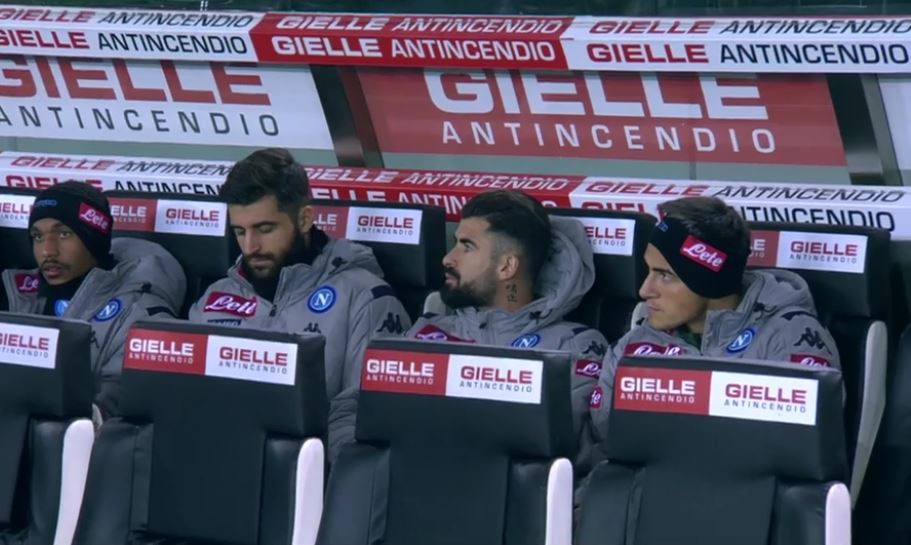 Italy, Serie B, Benevento – Trapani 5:0
Nikola Jakimovski wasn’t included in Trapani’s matchday squad who got smashed away to the table leaders.

Portugal, Liga NOS, Sporting – Moreirense 1:0
Another solid 90 minutes from Stefan Ristovski at right back today for Sporting as they came out 1:0 winners. It was only the second time he has started back to back games this season.

Romania, Liga I Betano, Botoșani – Cluj 2:1
Stefan Ashkovski was in the starting lineup for Botoșani and scored the first goal on the match in the 14th minute. This was Ashkovski’s fourth goal for Botoșani this season. Askovski played until the 79th minute when he was replaced by Andrei Patache.

Serbia, Linglong Tire SuperLiga, Javor – Voždovac 1:2
Aleksa Amanovikj was in the starting lineup for Javor, while Marko Gjorgjievski entered the match in the 58th minute and only a minute later he scored the winning goal on the match. This was Gjorgjievski’s second goal this season in Serbia.
Marko’s goal (at 1:25):

Slovakia, Fortuna Liga, Nitra – Trenčín 1:1
Milan Ristovski had an eventful game in the draw against Trenčín. He had the chance to open the score in the 14th minute when Nitra was awarded a penalty kick. Milan, who serves as the club’s penalty taker, fired a decent shot towards the right goalpost but the opponent’s goalkeeper managed to save it and kick the ball into a corner. However, an hour later he eventually did manage to finally open the score, but the lead lasted only 3 minutes as Trenčín immediately responded with an equalizer in the 77th minute, which ended being the final score of the game. This was Ristovski’s 8th goal this season, making him second best scorer in the Slovakian top flight.

Slovakia, Fortuna Liga, Ružomberok – Zlaté Moravce 0:0
Tomche Grozdanovski entered the game for the visitors at the start of the second half, while Tihomir Kostadinov did not make the matchday squad for the hosts. The game ended in a goalless draw.

Slovakia, Fortuna Liga, Senica – Žilina 1:2
Enis Fazlagikj played the entire game for the visitors who scored a winning goal in the final moments of the match. Enis also got booked in the second halftime.

Slovakia, Fortuna Liga, Pohronie – Sereď 2:1
Dejan Iliev remained as the starting goalkeeper for Sereď but his club suffered a loss against the last ranked team in the league. Dejan conceded 2 goals.

Spain, Primera División, Levante – Valencia 2:4
Enis Bardhi played the full game and helped Levante open the score in the 11th minute by assisting a goal for Roger. The same player doubled the lead 9 minutes later, and went on to score an own goal in the last moment of the first half, to leave Levante with a 2:1 lead during the halftime break. However, Valencia took things in their hands in the second halftime and scored 3 more unanswered goals to make a complete turnover and record a 2:4 away win.

Spain, Primera División, Barcelona – Mallorca 5:2
Aleksandar Trajkovski remains to be sidelined by Mallorca due to the injury he picked up with the national team.

Turkey, Süper Lig, Konyaspor – Gaziantepspor 0:0
Erdon Daci started the match on Konyaspor’s bench and entered the pitch in the 82nd minute to play the final 10 minutes of the game.

Turkey, Süper Lig, Yeni Malatyaspor – Sivasspor 1:3
Adis Jahovic played the full match for Malatyaspor but he failed to help his club avoid a defeat by Sivasspor.

Ukraine, Prem’yer-liha, Shakhtar – Olimpik 3:0
Demir Imeri played the entire match for the visitors as a right wing. Olimpik didn’t seem to stand a chance against the league leader Shakhtar.