Arijan Ademi had a fantastic match for Dinamo in Croatia as more and more leagues are returning around Europe.

Albania, Kategoria Superiore, Partizani – Kukësi 1:3
Egzon Belica was a starter for Partizani in central defense and played all minutes, while his teammate Besnik Ferati was an unused substitute. For the visitors Edis Malikji began at right-back.

Albania, Kategoria Superiore, Flamurtari – Skënderbeu 0:1
Agon Elezi started in midfield for the visitors, while Artim Polozhani had no game time.

Austria, Bundesliga, Rapid – Sturm 4:0
Adrian Hajdari was not in the matchday squad for the home team.

Bulgaria, Parva Liga, Tsarsko Selo – Slavia 1:3
Darko Tasevski remains sidelined by Slavia as he has still not recovered from his injury.

Ademi’s goal (at 1:33) and the won penalty immediately after that:

Croatia, Hrvatski Telekom Prva Liga, Istra – Rijeka 1:3
Agron Rufati remained on the bench for the hosts, while Darko Velkovski was not part of the visiting squad for this match.

Czech Republic, Fortuna Liga, Karviná – České Budějovice 0:0
Kire Markoski was not called up for this match by the hosts.

Germany, 2, Bundesliga, Stuttgart – Osnabrück 0:0
Darko Churlinov was given the final 15 minutes of the match but in a rather strange position for him. Instead on his preferred LW position, this time he played on the right side but as a full back and not a winger. It was a tactical reason by his coach as they wanted to score against an opponent that played very defensively. 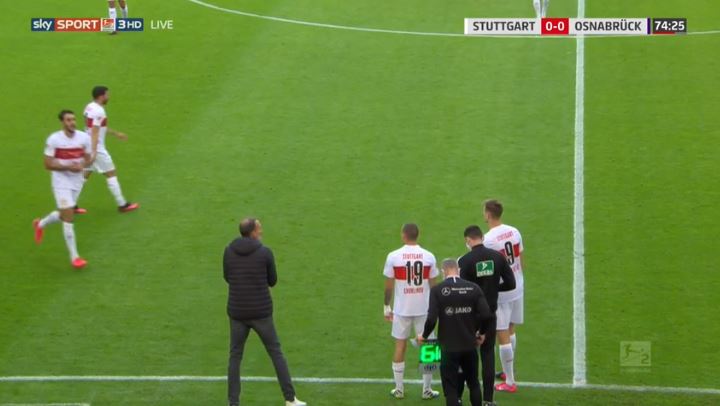 Hungary, OTP Bank Liga, Ferencváros – Diósgyör 3:0
Mirko Ivanovski started at center-forward for the visitors and lasted 74 minutes on the pitch.

Hungary, OTP Bank Liga, Újpest – Honvéd 1:0
Kire Ristevski played the whole match for the home team and helped his team to keep a clean sheet in the narrow win.

Poland, Ekstraklasa, Jagiellonia – Wisła Płock 2:2
Dejan Iliev was not called up for this match by the home side due to an injury.

Portugal, Primeira Liga, Vitória de Guimarães – Sporting 2:2
Stefan Ristovski wasn’t included in the visiting squad. Maybe coach Rúben Amorim disciplined Stefan by sitting him for one game as in the last match was on March 8 Stefan walked off the pitch in disgust at being substituted early (Sporting was playing first game under Amorim).

Serbia, Linglong Tire SuperLiga, Radnički – Rad 4:3
Aleksandar Todorovski was not in the hosts list for this match.

Serbia, Linglong Tire SuperLiga, Crvena zvezda – Radnik 4:1
Zoran Danoski played 72 minutes for the away team before he was taken off while Boban Georgiev played the final 18 minutes.

Slovenia, Prva Liga, Bravo – Triglav 1:0
Besart Abdurahimi entered the match in the 79th minute for the home team. The winning goal was scored in the 85th minute.

Slovenia, Prva Liga, Domžale – Maribor 1:2
Zeni Husmani started the match for the home side in defensive midfield and played the whole game.

2010 Macedonia beats Montenegro 2:1 in a friendly in Skopje.

Vlatko Stojanovski has looked promising for our NT. He has 2 goals in 6 caps (come in limited minutes)

I truly believe VS is good enough to do well at club level in the French second division, but he has not been given a chance by Chambly, where he is on loan from Nimes. Too bad