This past weekend Enis Bardhi and Elif Elmas had one goal apiece, Tihomir Kostadinov provided an assist while Stefan Spirovski won the title in Hungary.

Azerbaijan, Topaz Premyer Liqası, Qarabağ – Səbail 4:0
Tome Kitanovski was a starter for the visitors and played 86 minutes in the loss away to Qarabağ.

Bosnia-Herzegovina, BH Telecom Premijer Liga, Željezničar – Mladost 3:1
Djelil Asani opened at left-back for Mladost but played only until the 37th minute when he was sent off because of a red card.

Bulgaria, Parva Liga, Lokomotiv – Septemvri 1:2
Darko Glishikj was the entire game Septemvri’s left-back and played a big role in the win as he delivered the assist for the game winner scored in the 77th minute.

Croatia, Hrvatski Telekom Prva Liga, Hajduk – Inter 3:2
Mirko Ivanovski opened on Hajduk’s bench and played the last half hour. At that point the score was 2:1, Mirko’s team added one more goal in the 71st minute on the way to grab three points against Inter.

Croatia, Hrvatski Telekom Prva Liga, Istra – Rijeka 0:7
Agron Rufati was a starter for Istra and played all minutes, while Darko Velkovski and Milan Ristovski didn’t make Rijeka’s matchday squad; the former due to an injury. Eventually, Rijeka destroyed Istra on the road.

Cyprus, Protáthlima Cyta play-off, AEK – Nea Salamis 1:1
Daniel Mojsov was an unused substitute for AEK, whereas his teammate Ivan Trichkovski didn’t play because of injury. Trichko fractured his ribs during a training session and may be out for 6 weeks.

Finland, Veikkausliiga, RoPS – Helsingfors 1:0
Keeper Damjan Shishkovski got bench by the home team after playing the opening five rounds in which he once conceded directly from a corner kick.

Hungary, OTP Bank Liga, Ferencváros – Újpest 2:1
Stefan Spirovski was out of the home team squad because of injury, while Kire Ristevski played the whole match for the visitors and earned a yellow card in the first half. Ferencváros clinched the title with this win and Spirovski, who was in the stands, joined his teammates in the celebration after the final whistle. 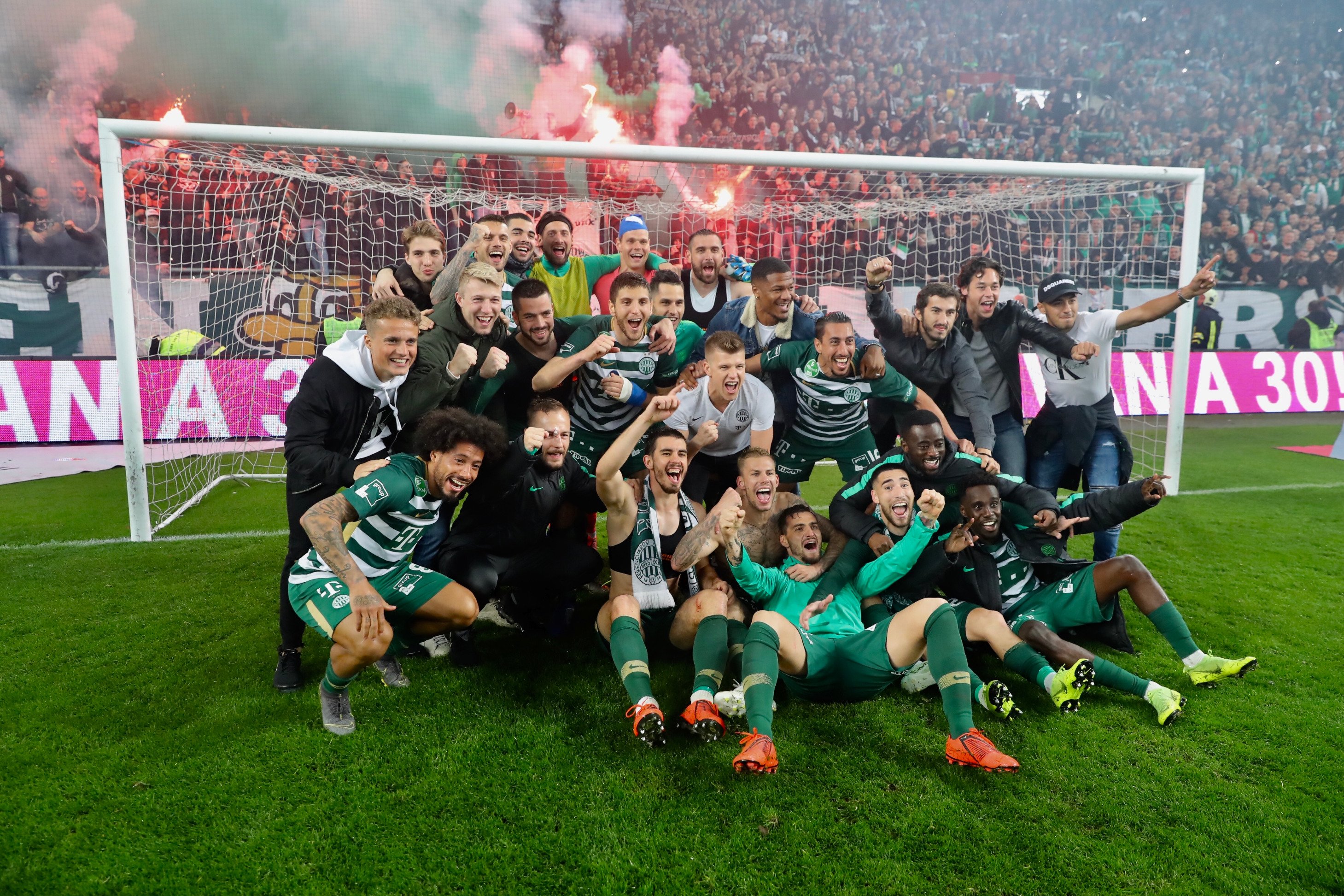 Hungary, OTP Bank Liga, Diósgyőr – Vidi 2:1
Boban Nikolov was in the starting lineup for Vidi and played until the 82nd minute.

Italy, Serie A, Genoa – Roma 1:1
Goran Pandev came off the bench in the 73rd minute as Genoa save a point in the stoppage time. But, could even take the three points as in the 94th minute Pandev played a nice cross which would lead to a Genoa penalty but Tonny Sanabria had his spot kick saved by the Roma keeper.

Pandev joins the celebration of the equalizer; photo: Genoa CFC

Italy, Serie B, Ascoli – Palermo 1:2
Aleksandar Trajkovski played the whole match for Palermo, while Ilija Nestorovski was out due to minor injury.

Netherlands, Erste Divisie, Dordrecht – Jong Utrecht 1:2
Antonio Stankov played the whole match for Dordrecht in the last round of the Dutch Eerste Divisie.

Portugal, Liga NOS, Belenenses – Sporting 1:8
Stefan Ristovski put in another good display for Sporting as his team destroyed Belenenses with 1:8. This was Sporting’s tenth consecutive win.

Romania, Liga I Betano, Dunărea – Dinamo 1:0
Filip Gligorov was in the starting lineup for the home team and played until the 75th minute.

Romania, Liga I Betano, Viitorul – Sepsi 3:1
Marko Simonovski didn’t play for the away team on this match because of injury.

Slovakia, Fortuna Liga play-off, Ružomberok – Slovan 3:2
Tihomir Kostadinov started in midfield for Ružomberok and played till the 75th minute when he was replaced by Viktor Jedinák. Kostadinov provided an assist to the Bosnian international Zinedin Mustedanagić in the first minute of the first half additional time.

Slovakia, Fortuna Liga play-out, Železiarne – ViON 0:1
Tomche Grozdanovski played the entire match for the visitors and got booked in the 84th minute.

Spain, Primera División, Levante – Rayo Vallecano 4:1
Enis Bardhi played full game for Levante but didn’t face keeper Stole Dimitrievski who was once again left at Rayo’s bench. Bardhi scored the last goal for his team in the 90th minute which was his first goal in La Liga after seven months. Important points for Enis’ team who is active in the battle for avoiding relegation, while Stole’s side seems doomed.

Turkey, Süper Lig, Alanyaspor – Konyaspor 2:4
Both Leonard Zhuta and Adis Jahovic got bench at this match and only Adis got a chance to play few moments when he came on instead Mustapha Yatabaré in the second injury minute.

Turkey, Süper Lig, Erzurum – Bursaspor 2:0
Jani Atanasov was an unused substitute for the visiting side.

Turkey, Süper Lig, Kasımpaşa – Fenerbahçe 1:3
Elif Elmas played until the 61st minute for Fenerbahçe when Victor Moses took his place. Previously he scored the equalizer for his team in the 20th minute of the game. It was his third goal this season in the Turkish championship.

Ukraine, Prem’yer-liha play-out, Karpaty – Arsenal 1:2
Stefan Jevtoski continues to be out of Arsenal’s squad due to injury.

2001 Macedonia holds Czechia to a 1:1 draw in a friendly match in Skopje.

Round 20 Results from earlier today:

All 12 clubs will be in action for Round 21 this upcoming Wednesday.