photo by Dnes 24: Ristovski throws up his shirt to celebrate his beautiful goal

Albania, Kategoria Superiore, Kukësi – Flamurtari 1:0
Both full backs – Tome Kitanovski and  Edis Malikji made the start for the hosts. Tome got substituted at the start of the second halftime, while Edis went on to play the entire match.

Albania, Kategoria Superiore, Partizani – Luftëtari 2:0
Egzon Belica played another full game for Partizani while his teammate Besnik Ferati once again did not make the bench.

Albania, Kategoria Superiore, Skënderbeu – Laçi 1:4
Artim Polozhani played the 90 minutes for Skënderbeu who suffered a tough loss at home to Laçi. Defender Polozhani was directly involved in two of the goals when he got outplayed by former Pobeda striker Kyrian Nwabueze who scored two of Laçi’s goals. Meanwhile, Agon Elezi did not get any playing time for the hosts in this round as he spent the entire match on the bench.

Albania, Kategoria Superiore, Teuta – Tirana 1:1
Bobi Celeski was once again the reserve goalkeeper for Teuta while his teammate Blagoja Todorovski did not make the squad for this encounter. The match ended in a tie, and it’s interesting to note that Tirana finished the game with only 9 players after getting two red cards in the second half.

Albania, Kategoria Superiore, Vllaznia – Bylis 0:1
Neither Filip Gligorov nor Aleksandar Ristevski got involved in this match as Vllaznia lost at home to Bylis.

Belgium, Jupiler Pro League, Mechelen – Charleroi 2:2
Gjoko Zajkov was a healthy scratch by Charleroi as he didn’t even make the bench for this match. Gjoko will be looking to move during the winter transfer window.

Bosnia-Herzegovina, BH Telecom Premijer Liga, Sarajevo – Široki Brijeg 3:0
Krste Velkoski returned from his injury and started off from the bench for Sarajevo and entered the game in the 67th minute. Sarajevo already had the 3:0 lead at that point, which remained to be the final score. For the visitors, Viktor Angelov was not get summoned for this round. This was the third consecutive game that Viktor has not made the bench for Široki Brijeg but there is no info from the club as to whether he is sidelined due to an injury.

Croatia, Hrvatski Telekom Prva Liga, Dinamo – Inter 1:0
Arijan Ademi remains to be sidelined due to his injury. It remains to be seen whether he will return to action in time for the upcomming national team fixtures.

Croatia, Hrvatski Telekom Prva Liga, Osijek – Rijeka 3:2
Neither Todor Todoroski and Mile Todorov from Osijek nor Darko Velkovski from Rijeka got summoned in this encounter. The young Macedonian Osijek duo was once again left to play for the club’s second team in the Croatian second division, while Velkovski remains sidelined due to his injury. According to a recent statement from the club, Darko is not close to a come back and will be absent for a while longer.

Cyprus, Protáthlima Cyta, APOEL – AEK 0:0
Daniel Mojsov is finally back from the injury and played 66 minutes for the visitors before he was taken off, while Ivan Trichkovski played the whole match.

Cyprus, Protáthlima Cyta, AEL – Paphos 2:0
Davor Zdravkovski played the whole match for the ghosts while his teammate Kire Markoski remained at the bench.

Cyprus, Protáthlima Cyta, Doxa – Nea Salamis 0:0
Dushko Trajchevski remained on the bench for the hosts. Doxa are still looking for their first win after 8 rounds.

Cyprus, Protáthlima Cyta, Ethnikos – Omonia 1:2
Martin Bogatinov was between the posts for the home team, while Jovan Kostovski played 82 minutes before he was taken off. Bojan Markoski was not part of the matchday squad.

England, Championship, Leeds United – QPR 2:0
Ezgjan Alioski did not play for the home team as he had an injury.

France, Ligue 1, Nîmes – Rennes postponed
Vlatko Stojanovski did not have a chance to build upon his debut goal for Nîmes scored in the Cup last week as the match between his side and Rennes was postponed due to heavy rain. The new fixture is yet to be announced.

Hungary, OTP Bank Liga, ZTE – Fehérvár 3:3
Visar Musliu and Boban Nikolov both played the whole match for the away team.

Hungary, OTP Bank Liga, Diósgyör – Kisvarda 3:1
Mirko Ivanovski remained on the bench as he had to wear a protective mask after his broken nose injury in the previous round.

Germany, Bundesliga, Düsseldorf – Köln 2:0
Darko Churlinov wasn’t included in Köln’s first team, but he scored again for the second team and Köln II won away to Bonner with 2:4 in the Regionalliga. This was Churlinov’s 5th goal for Köln II this season. 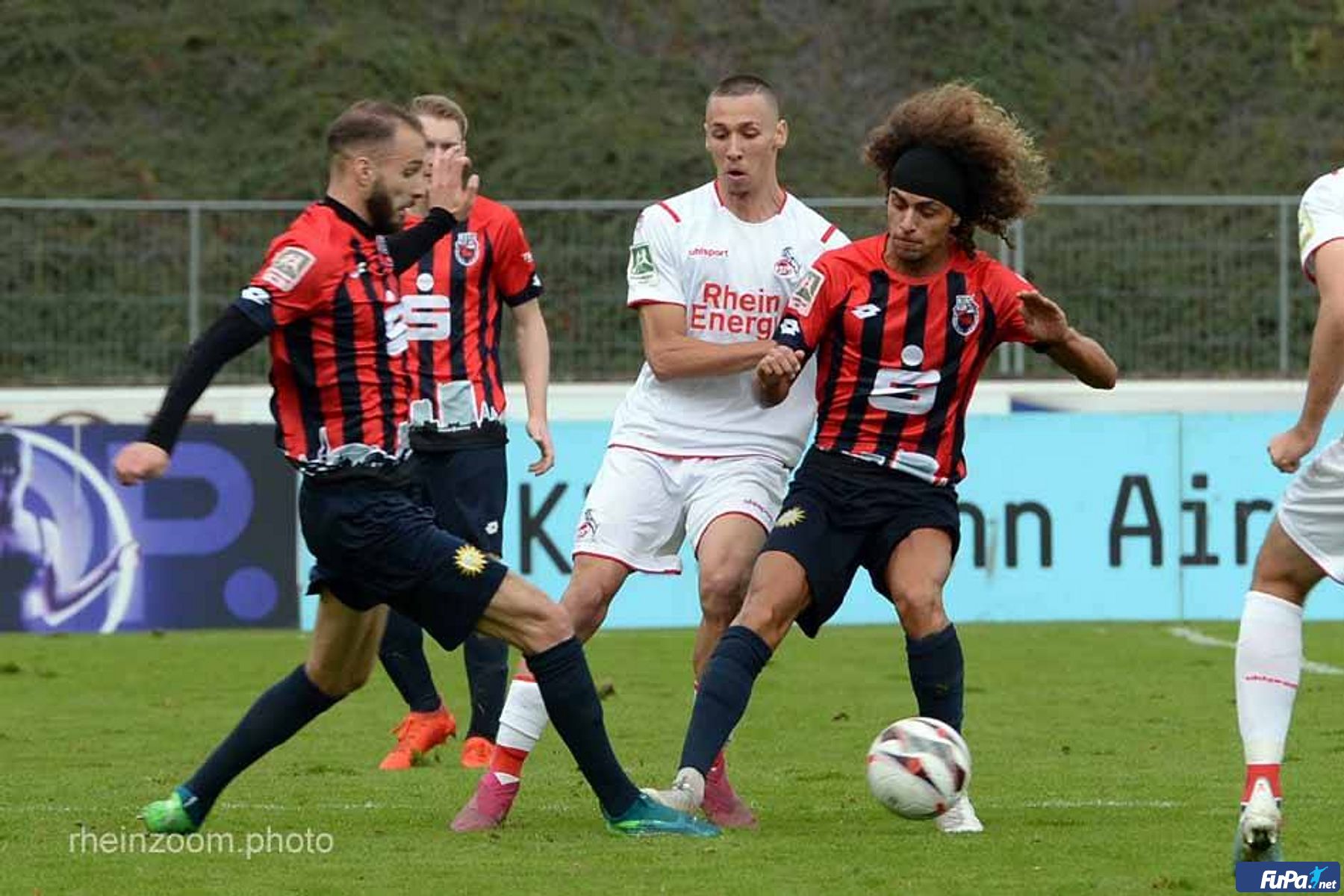 Churlinov (C) during the match for Köln II; photo: RheinZoom

Italy, Serie A, Genoa – Udinese 1:3
Goran Pandev scored, but Ilija Nestorovski celebrated at the end. In the 22nd minute Pandev scored his second goal for Genoa this season, but ten minutes later Nestorovski assisted to Rodrigo De Paul for equalizing the score. In the second half Udinese scored two more goals and celebrated a 1:3 win away to Genoa. Pandev played the whole match as captain of Genoa, while Nestorovski was replaced by Lasagna in the 72nd minute.

Portugal, Liga NOS, Tondela – Sporting 1:0
Stefan Ristovski was in the starting lineup and played the whole match for Sporting, but his team was surprised away to Tondela.

Romania, Liga I Betano, Voluntari – Botoșani 1:2
Stefan Ashkovski was in the starting lineup for Botosani and was replaced after the half time break, while Marko Simonovski entered the match for Voluntari in the 75th minute.

Serbia, Linglong Tire SuperLiga, Indjija – Javor 2:3
Aleksa Amanovikj scored an own goal in the 49th minute, earned a yellow card in the 76th minute and was replaced two minutes later. His team still managed to win at the end.

Serbia, Linglong Tire SuperLiga, Radnik – Voždovac 2:2
Zoran Danoski was in the starting lineup for Radnik, same as Marko Gjorgjievski for Voždovac. Danoski was replaced in the 74th minute, while Gjorgjievski played until the 84th minute. Boban Georgiev wasn’t included in Radnik’s squad.

Slovenia, Prva Liga, Bravo – Maribor 0:1
Besart Abdurahimi spent all minutes on the pitch for the home team and he was also booked at 73rd minute of the match..

Spain, Primera División, Levante – Barcelona 3:1
Enis Bardhi started in midfield for Levante and played until 62nd minute when he made way for Rubén Rochina. He was also shown a yellow card at 52nd minute of the game.

Bardhi is being passed by Leo Messi; photo: BuakSib

Sweden, Allsvenskan, AIK – Sundsvall 2:1
In the last round of this season David Mitov Nilsson spent whole game between Sundswall’s posts and conceded two goals in his team’s away defeat. Sundsvall got relegated to the Swedish second league (Superettan) and Nilsson is going back to Norrköping because he was on lone till the end of this season.

Turkey, Süper Lig, Kasimpaşa – Malatyaspor 2:2
Adis Jahovic played entire match for Malatyaspor and he scored his team’s first goal in the 61st minute from the match.

2010 Macedonia beats Montenegro 2:1 in a friendly in Skopje.

Vlatko Stojanovski has looked promising for our NT. He has 2 goals in 6 caps (come in limited minutes)

I truly believe VS is good enough to do well at club level in the French second division, but he has not been given a chance by Chambly, where he is on loan from Nimes. Too bad