Aleksandar Trajkovski managed to score a goal and later to assist for Palermo, Ezgjan Alioski scored once for Leeds, Adis Jahovic won a penalty in Turkey, while Bojan Najdenov converted a penalty in Albania.

photo by CameraSport: Alioski celebrates his goal against WBA

Albania, Kategoria Superiore, Flamurtari – Kastrioti 1:1
Artim Polozhani was all minutes in central defense for Flamurtari as his team grabbed one point in the home encounter against Kastrioti.

Albania, Kategoria Superiore, Kukësi – Luftëtari 3:0
Edis Malikji and Ardian Cuculi started in defense for the hosts and helped their team to keep a clean sheet in the comfortable win against Luftëtari.

Albania, Kategoria Superiore, Tirana – Partizani 0:0
Central defender Egzon Belica was part of Partizani’s defense that kept a clean sheet in the goalless draw away to Tirana.

Albania, Kategoria Superiore, Kamza – Laçi 1:1
Bojan Najdenov played an important role in Laçi’s draw away to Kamza as he netted his teams equalizer when he converted a penalty in the stoppage time. Unfortunately, directly after Najdenov’s penalty happened an incident as part of Kamza’s fans interrupted the game.

Bulgaria, Parva Liga, Dunav Ruse – Botev Plovdiv 1:1
Aleksandar Isaevski returned to the starting lineup for Dunav Ruse after having missed out the last round, and he went on to play the full 90 minutes for the hosts.

Bulgaria, Parva Liga, CSKA – Septemvri 5:1
Darko Glishikj played the full game for the visitors and also got booked in the 57th minute. Interestingly, Glishikj was fielded as a right wing in this game, instead of his usual left back position. Septemvri ended up conceding five goals by CSKA, suffering a 5:1 defeat.

Bulgaria, Parva Liga, Slavia – Levski 0:3
Both Stefan Ashkovski and Darko Tasevski made the starting lineup for Slavia. Ashkovski got substituted in the 56th minute (immediately after Levski’s third and final goal), whereas Tasevski lasted 14 minutes longer when Krastev took his place.

Croatia, Hrvatski Telekom Prva Liga, Lokomotiva – Dinamo 1:1
Arijan Ademi did not make the squad for Dinamo as he will be undergoing a surgery and will be out of action in the following period. He will also miss out on the upcoming national team fixtures.

Croatia, Hrvatski Telekom Prva Liga, Inter – Hajduk 1:3
Mirko Ivanovski remains to be sidelined by Hajduk due to an injury.

Croatia, Hrvatski Telekom Prva Liga, Osijek – Slaven Belupo 1:1
After months of absence, Muzafer Ejupi finally recovered from his injury and made the bench for Osijek. He will be expecting to get some playing time in some of the upcoming rounds.

Croatia, Hrvatski Telekom Prva Liga, Rijeka – Istra 2:0
Darko Velkovski and Milan Ristovski both started the game for Rijeka on the bench with Darko also entering the match in the 13th minute after starting center back Roberto Punčec suffered an injury. For the visitors, Agron Rufati did not make the bench. 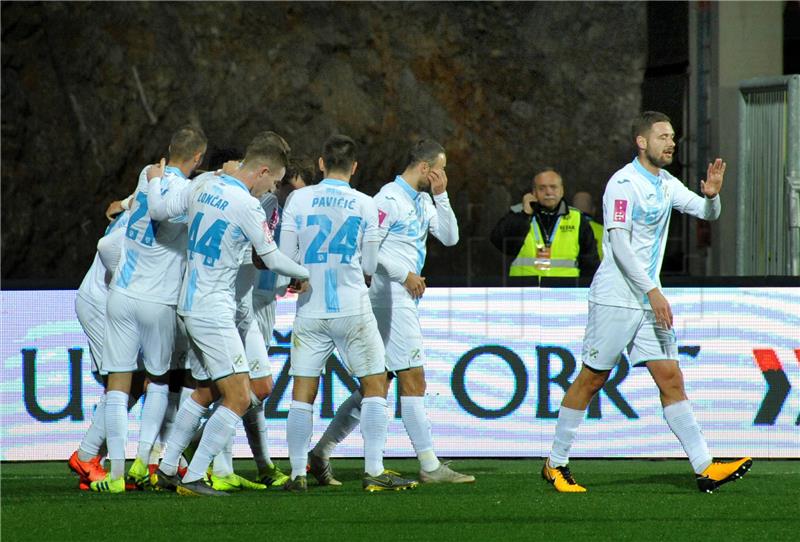 Cyprus, Protáthlima Cyta, AEK – AEL 1:0
Daniel Mojsov played the full game for AEK and got booked shortly before the halftime break. His teammate Ivan Trichkovski started on the bench and entered the game in the 69th minute, but things did not go well as only three minutes later he picked up an injury and was forced the leave the match. It remains to be seen how serious his injury is, but there is a solid chance he might be sidelined for some time now and he might miss out the upcoming national team fixtures. For the visitors, Davor Zdravkovski did not make the squad for this encounter.

Cyprus, Protáthlima Cyta, Paphos – Alki 0:3
Dushko Trajchevski played the full game for the visitors and also got booked at the start of the second half.

England, Championship, Leeds United – West Bromwich Albion 4:0
Ezgjan Alioski played the full game for Leeds United as a left back, and he scored the final goal of the match in the stoppage time to put an impressive 4:0 victory over WBA. Leeds fans praised him for his performance after the game as they also voted him out as man of the match.

Finland, Suomen Cup, RoPS – KuPS 3:2
Damjan Shishkovski was the starting keeper for the winning side. His club managed to advance to the next round of the Finnish cup with a winning goal in the dying minutes of the game.

Greece, Souroti Soúper Lígka, OFI – Larissa 0:0
Nikola Jakimovski started the game on the bench and was brought on in the 79th minute for the visiting team while his teammate Davor Taleski was not part of the matchday squad.

Hungary, OTP Bank Liga, Ferencváros – Diósgyőr 7:0
Stefan Spirovski was not part of the winning squad as he is still out with an injury.

Hungary, OTP Bank Liga, Újpest – MTK 0:0
Kire Ristevski is out with an injury and was not part of the home team.

Hungary, OTP Bank Liga, Vidi – Kisvárda 2:1
Boban Nikolov played the final ten minutes of the game. The final score was already set when he was brought on.

Italy, Serie A, Genoa – Frosinone 0:0
Goran Pandev was brought on at the start of the second half taking the place of defender Davide Biraschi. This was his 400th appearance in the Serie A. Of all the current foreign footballers in Serie A, only Samir Handanović has more appearances than the Macedonian forward.

Romania, Liga I Betano, Gaz Metan – Dunărea 0:0
Mite Cikarski had his debut for Gaz Metan and played the whole match, while Filip Gligorov was left out of Dunărea’s squad.

Romania, Liga I Betano, Hermannstadt – Poli Iași 2:0
A week ago Besart Abdurahimi got back in Hermannstadt but wasn’t included the squad for this clash.

Romania, Liga I Betano, Cluj – Sepsi 1:0
Marko Simonovski missed this match for Sepsi because of injury.

Serbia, SuperLiga, Radnički Niš – Radnik 4:1
Aleksandar Todorovski played the whole match for the home team and earned a yellow card in the 76th minute, while Zoran Danoski missed this match for Radnik.

Slovakia, Fortuna Liga, Slovan – Spartak 2:0
Kire Markoski played until the 87th minute for Spartak when he made way for Nigerian international Musefiu Ashiru.

Spain, Primera División, Leganes – Levante 1:0
Enis Bardhi played the entire match as his team got defeated by an early goal. He looked the most dangerous out of the Levante players and had the best chance as he struck the post in the 42nd minute and before that he had a nice free kick effort.

Sweden, Svenska Cupen Group 2, Norrköping – Eskilstuna 1:1
David Mitov Nilsson spent entire game at Norrköping’s bench. It is obvious that the manager is rotating both keepers, giving each a chance to play every second game. On Monday, his team played a friendly and he was between the posts.

Sweden, Svenska Cupen Group 4, Varbergs – Eskilsminne 1:1
Daniel Krezic played the full 90 minute for the hosts and got booked at the 56th minute, but did not get a chance to face Alex Simovski who remained at the visiting bench.

Switzerland, Raiffeisen Super League, Grasshoppers – Luzern 1:3
Nikola Gjorgjev wasn’t part of the home team’s squad at this game. It is the first game he misses after playing four in a row.

Turkey, Süper Lig, Konyaspor – Göztepe 1:1
Adis Jahovic came back from suspension and played the entire match against his former team of Göztepe while his teammate Leonard Zhuta was substituted at half-time by Ferhat Öztorun. Zhuta was also booked in the 20th minute. Adis won a penalty in the stoppage time but his teammate Nejc Skubic blew the opportunity for a win. In the very next minute Adis had a colossal scoring chance but his header went over the bar.

A goal-scorer is affectionately referred to as "bomber" in Italy

Nestorovski does not have the technique of a Pandev or the dribbling of an Elmas, so he is paid to score goals

Only 3 is not what he/Udinese expected. Nesto was #3 on the depth chart at FW behind Lasagna/Okaka 2/2