Mario Gjurovski in Thailand and Daniel Krezikj in Sweden were the only Macedonian international players who scored goals for their teams this weekend across the world, while Stefan Ristovski lost the big Portuguese derby against Porto.

Australia, Hyundai A-League, Newcastle United Jets – Sydney 2:1
Daniel Georgievski opened at left-back for Newcastle and played all minutes in the win against Sydne. In the 5th minute of stoppage time Daniel was also booked with a yellow card.

Croatia, Hrvatski Telekom Prva Liga, Dinamo – Slaven Belupo 1:0
Arijan Ademi was Dinamo’s captain and played the entire game in defensive midfield, while Mirko Ivanovski and Tome Kitanovski played all minutes for the visitors. Arijan’s team had the better end thanks to Mario Gavranović’s game winner in the 50th minute. 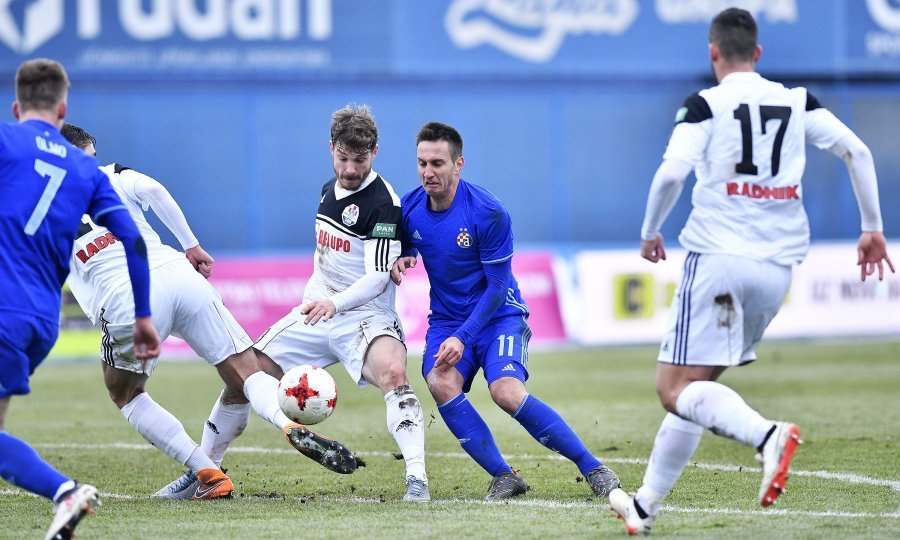 Cyprus, Protáthlima Cyta, AEK – Anorthosis 2:2
Daniel Mojsov and Ivan Trichkovski played the whole game for the hosts who have now lost the chances for chasing the title but still play for spot in Europa League qualification.

Cyprus, Protáthlima Cyta, Ermis – Alki 0:1
Aleksandar Damchevski played 77 minutes for the home team before he was taken off.

England, Championship, Middlesbrough – Leeds United 3:0
Ezgjan Alioski started the game and played the first half for the visiting side.

Finland, Veikkausliiga, PEPO – Honka 0:3
Davor Taleski was not between the posts for this game for Honka.

Hungary, OTP Bank Liga, Diósgyőr – Ferencváros 2:1
Stefan Spirovski took part in the first goal as he first intercepted a ball from a throw in and then was part in organizing the move for goal.

Hungary, OTP Bank Liga, Újpest – Mezokovesd – 2:3
Remzifaik Selmani was not part of the matchday squad for the home team.

Hungary, OTP Bank Liga, Haladás – Vasas 3:0
Kire Ristevski played the whole game for the visiting side. With this defeat Vasas have slipped to the relegation zone and will need to step up in the later stages of the season.

Italy, Serie A, Genoa – Cagliari
Goran Pandev was in the starting line-up for Genoa, but the game never kicked-off as the Italians cancelled all the Sunday matches due to the death of Fiorentina’s captain Davide Astori who never woke up on the match day, dying in sleep in his hotel room.

Italy, Serie B, Parma – Palermo
Ilija Nestorovski and Aleksandar Trajkovski got stuck in the snowy town of Parma in Central Italy. Their match was postponed due to the heavy snow that covered the stadium on Saturday. The tweet bellow shows the stadium prior to the game:

Portugal, Liga NOS, Porto – Sporting 2:1
Stefan Ristovski got the chance to start the match for Sporting and played until the 68th minute when his was replaced by Ribeiro. His team lost the match away to big rivals Porto with 2:1. For the winning goal Ristovski failed to intercept the ball and fall.

Serbia, SuperLiga, Zemun – Javor 0:2
Aleksa Amanovikj and Filip Ristovski played the entire game for Javor and were part of a defense that kept a clean sheet. In the 42nd minute Filip also received a yellow card. Meanwhile, Dushan Savikj still waits for his first call up by Zemun.

Slovakia, Fortuna Liga, Tatran – Ružomberok 0:0
Last week 18-year-old winger Kristijan Trapanovski moved on loan from Czech side Slavia to Tatran. Kristijan directly made Tatran’s matchday squad, but didn’t play. For the visitors, Tihomir Kostadinov opened in midfield and played the first half as he was replaced after the half-time break. Kristijan at the presentation; photo: 1fctatran.sk

Spain, Segunda División, Gimnàstic – Tenerife 1:2
Stole Dimitrievski as usual was the starting goalie for Nàstic and conceded two goals in the loss against Tenerife.

Sweden, Svenska Cupen, Syrianska – Oddevold 5:3
Daniel Krezikj scored his teams last goal in the 90th minute, but it wasn’t enough to avoid the loss against Syrianska.

Thailand, Toyota Thai League, Bangkok Glass – Port MTI 2:0
Mario Gjurovski started in attacking midfield for Bangkok Glass and netted his teams second goal in the 9th minute. It was a real beauty as Mario chipped the ball over an opponent before he fired a right-footed shot to the back of the net.

Turkey, Süper Lig, Fenerbahçe – Akhisar 2:3
Elif Elmas wasn’t called up by the hosts for this match.

Turkey, Süper Lig, Konyaspor – Malatyaspor 0:1
Adis Jahovikj played all minutes at center-forward for Konyaspor as his team suffered a narrow loss against Malatyaspor.

Ukraine, Prem’yer-liha, Mariupol – Olimpik 1:0
Besir Demiri played the entire game at left-back for Mariupol and was part of a defense that kept a clean sheet. Besir also received a yellow card in the 65th minute.

Grasshoppers (team of Nikola Gjorgjev) was also supposed to be in action today, but their game was postponed because Amel Rustemoski (who is of Macedonian origin and has been recruited by our federation in the past) tested positive for the coronavirus.

We send well wishes to AR