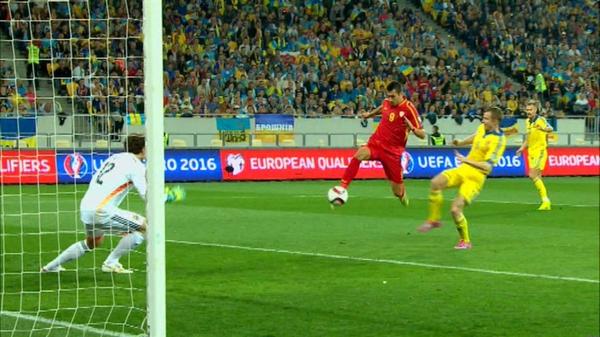 For the third consecutive match to start these qualifications, Macedonia conceded a goal just before the halftime whistle, which proved the difference today, to suffer a 1:0 loss against Ukraine.

The lack of concentration did in Macedonia once again, resulting in 1:0 loss after Ukraine scored the only goal of the match in the second and final minute of stoppage time in the 1st half.  Ukraine opened as the better side by controlling possession, but Macedonia was able to withstand the early onslaught in front of a very energetic crowd of over 30,000 fans.

Andriy Yarmolenko and Yevhen Konoplyanka signaled their presence early on, but it was Adis Jahovikj who had the first big chance in the 21st minute.  A good cross by Ezgjan Alioski found Jahovikj, who beat the offside trap, but his shot from a great position was straight at the Ukrainian keeper.  Besart Abdurahimi, who looked lively with his movement and dribbling skills, attempted a powerful effort in the 34th minute that was punched away by Andriy Pyatov out for a corner.

Yarmolenko did send a shot past Tome Pachovski in the 36th minute, but he was clearly offside so the goal did not count.  On the other end, Arijan Ademi let go of an effort that took a slight deflection before going just wide of the left goal post.  Macedonia did improve as the 1st half went on and then Mirko Ivanovski came close in the 45th minute when his looping attempt went just beyond the right goal post.

Ukraine, however, grabbed a goal in the second and final minute of stoppage time in the 1st half when Serhiy Sydorchuk fired home a shot from close range.  Macedonia lost concentration near the end of the half and was punished once again.  This marked the third game in a row in which Macedonia has conceded a goal moments before the halftime whistle (they allowed a goal in stoppage time vs. Spain and then in the 44th minute vs. Luxembourg).

The 2nd half started off terribly after a bad clearance by Tome Pachovski led to a penalty for Ukraine.  The defenders tried to recover from the bad clearance, but it wasn’t meant to be as a player from Ukraine was fouled inside the area.  The referee immediately pointed to the spot where Macedonia caught a break when Yarmolenko’s penalty struck the top of the crossbar.

The tempo slowed down in the 2nd half as there were not as many chances.  The next good opportunity for Macedonia did not come until the 73rd minute when Aleksandar Trajkovski’s free kick was well saved by Pyatov.  Ten minutes later, the match was briefly interrupted after a flare was thrown from the stands.

In the dying moments of the 90th minute, Macedonia had two opportunities to equalize.  First, substitute Aco Stojkov sent a great through ball to Abdurahimi who used his pace to get in front of his marker, but his shot was blocked and it went out for a corner.  Then, two minutes later, the Ukrainian keeper totally whiffed in dealing with another corner, but no Macedonian player could latch onto the ball in front of an empty net.  The six minutes of stoppage time would then expire as Ukraine held on to record a 1:0 victory.

Elif Elmas scores his first Serie A goal against Sampdoria