Slovakia remained perfect in qualifying play with a 2:1 victory to spoil the debut of new Macedonian manager Ljubinko Drulović.

Ljubinko Drulović had some surprises up his sleeve once the starting lineup was announced about one hour before the game. He utilized his preferred 4-2-3-1 formation, but there were several surprises.

Aleksandar Todorovski was given the nod over Stefan Ristovski at right back, Muarem started on the left wing, while Aleksandar Trajkovski was fielded as the lone striker up front. Furthermore, the second defensive midfield spot went to Dushko Trajchevski.

Macedonia opened very defensive as Slovakia ran rampant in the opening stages of the game. The home side took the initiative early in the game and scored a quick goal in the 8th minute. After a free kick was not cleared properly, Slovakia played a long ball back into the crowded box which reached Kornel Saláta who sent a looping header past the outstretched arms of Tome Pachovski.

Interestingly, on that free kick that led to the goal, Slovakia first took it quickly, but the referee blew his whistle to put the ball back. On their next try, that would lead to the opening goal. Macedonia wanted offside on that goal, but the referees ruled that to be valid. 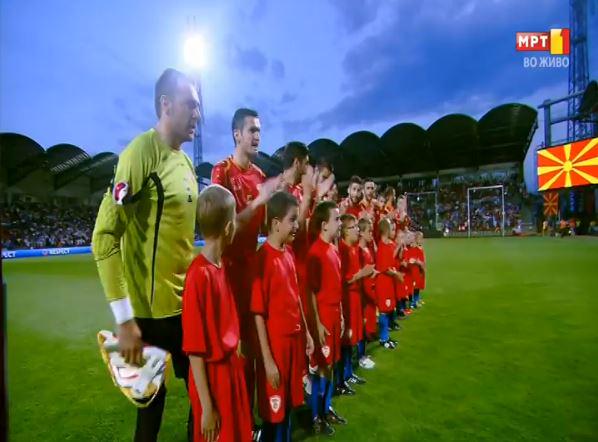 Trajkovski, Macedonia’s best player in these qualifications, was completely ineffective as a CF. He is a winger/attacking midfielder who is very good running at other players, but playing CF did not allow him to do those things. Trajkovski was very quiet in his new role, as were the players behind him.

In the 38th minute, Slovakia would make it 2:0 courtesy of Marek Hamšík. After a jumping duel, Hamšík would receive a pass to send him through on goal. He did the rest by rounding Pachovski before scoring into an empty net. 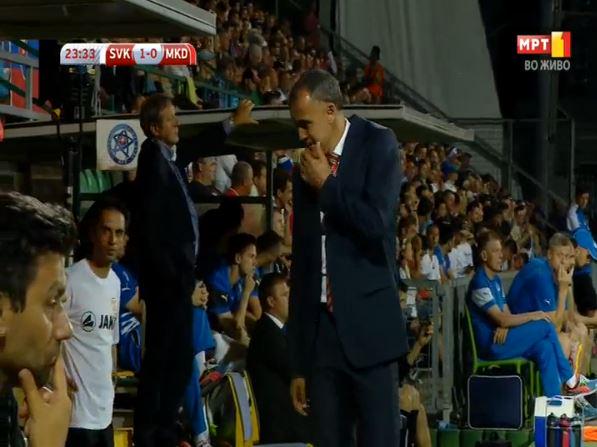 The first shot on goal for Macedonia didn’t come until the 41st minute, when Arijan Ademi’s effort was easily saved by the Slovak keeper.

No changes were made by Drulović at the start of the 2nd half. Instead, it was more of the same in the opening stages of that half. Trajkovski was then substituted in the 56th minute for Mirko Ivanovski. 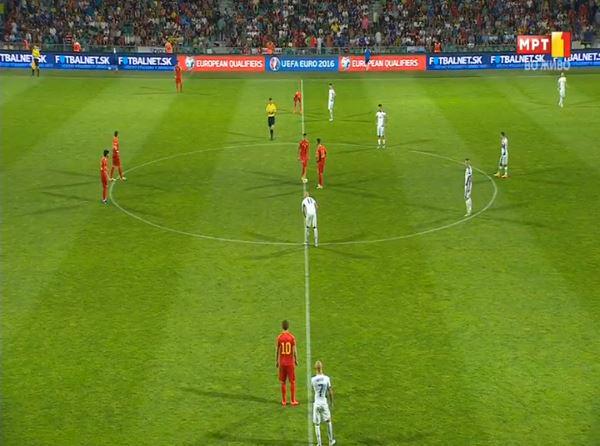 Slovakia had several chances around the hour mark, but Pachovski did well to deny Róbert Mak and Juraj Kucka.

In the 69th minute, with Macedonia looking out of sorts, they would score a goal out of nowhere. Following a corner kick, the ball would find Arijan Ademi who scored an easy goal from close range. That was Ademi’s first goal for Macedonia.

However, instead of that goal energizing the team, Macedonia did not come close to scoring an equalizer in the final 20+ minutes. No quality chance could be created to test the opposing keeper. In the 84th minute, Ferhan Hasani was even sent off after he picked up his second yellow card of the game. 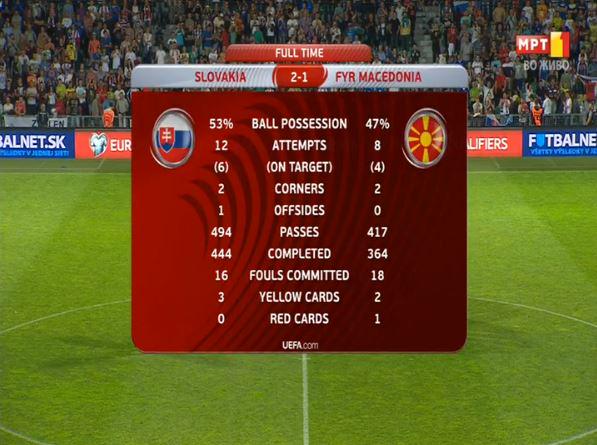 Slovakia held on to the 2:1 victory to remain perfect in these qualifications. They now have 18 points from their six games.

Overall, the stats above don’t tell the whole story. Stats can be misleading, and they were in this game. Slovakia completely outplayed Macedonia and they have already clinched a top-3 spot in the group after today’s losses by Macedonia and Belarus. In the final four games, Slovakia will look to hold off Spain and Ukraine for the top spot in Group C.