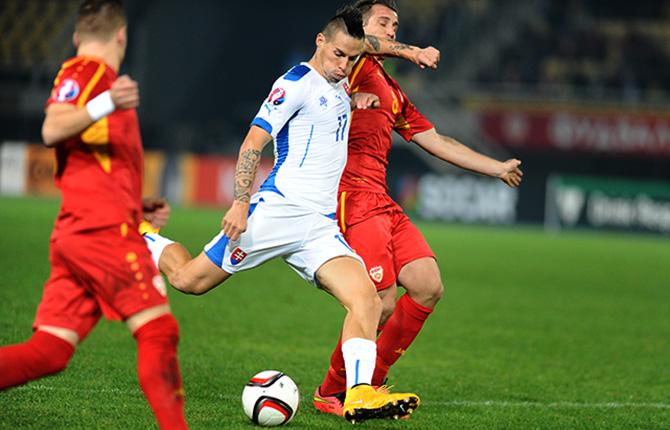 Macedonia fell to distant fourth on the Group C standings after suffering a 2:0 home loss against Slovakia.

Manager Boshko Gjurovski was very secretive about which starting lineup Macedonia would deploy against Slovakia.  The senior national team even played a friendly against the U17 squad earlier in the week that the media could not watch.  Gjurovski played his cards close to his vest as he did not want his planned starting lineup to leak to the press.

Today, about an hour before the game, we saw that Macedonia’s lineup did not feature a classic CF among the starters.  Instead, Gjurovski opted to start Aco Stojkov and Krste Velkoski as the two players closest to the goal.  Who knows whether Gjurovski planned to start those two guys all along, or whether he had to change his plans following the suspension of Adis Jahovikj.

That decision by Gjurovski to start the seldomly used Stojkov and Velkoski left him open to possible second guessing after the game, which is what undoubtedly will happen after this latest loss.

The opening five minutes were rather quiet as both teams exchanged possession, but could not muster any quality chances.  The first real opportunity came in the 6th minute when Marek Hamsik was given a lot of space, but his shot wound up just wide of the left goal post.

On the other end, Macedonia created two quick chances in the 9th and 10th minute.  On the first try, Slovakia had a bad giveaway which led to a good look for Velkoski who sent a weak effort wide of the goal.  Then, a minute later, Besart Abdurahimi made a nice run to create space for himself, but his shot from a tight angle went wide of the target.

The match then slowed down once again in terms of goal scoring opportunities before Velkoski tested the keeper in the 23rd minute.  On that play, the referee decided to play advantage after one Macedonian player went down.  Velkoski was able to gather the ball and fire a shot that was parried away by the diving Slovak keeper out for a corner kick.

Unfortunately, just two minutes later, the breakthrough came in the name of Juraj Kucka.  Vladimír Weiss made a low cross from the right hand side which led to an easy tap-in goal for Kucka.  That goal seemed to deflate Macedonia as the next ten minutes saw a lot of passing without much purpose.

In the 38th minute, Slovakia doubled the lead following a disastrous mistake by Daniel Mojsov.  Slovakia made a rather simple cross from the left hand side that didn’t have much power, but Mojsov totally whiffed in clearing the ball, leading to another easy goal for Slovakia.  In this case, Adam Nemec was the lucky beneficiary of the defensive miscue as he easily beat Pachovski from close range.

Macedonia did improve following that goal as they had three good opportunities before the halftime break.  Two of them involved well taken free kicks by Aleksandar Trajkovski in the 41st and 44th minute, the first one striking the crossbar while the second one was barely stopped by the keeper.  He bobbled that save, but his defenders bailed him out when they sent the rebound out for a corner kick.  Finally, in the 45th minute, Arijan Ademi fired in a shot that was once again bobbled by the keeper, the ball then reaching Aco Stojkov on the rebound but he couldn’t get the ball down to convert the chance.  After that squandered moment, the referee blew the whistle for halftime.

The start of the 2nd half saw Macedonia make one change with Jovan Kostovski taking the place of Stojkov.  Macedonia made a positive start, nearly leading to a goal by Abdurahimi in the 50th minute when his powerful shot went inches over the goal.  Slovakia seemed content with the two goal lead, so Macedonia enjoyed most of the possession in the 2nd half.  There was a lot of passing, but moments of brilliance were lacking in open play.  Just like the opening half, Macedonia’s most dangerous moments came on free kicks by Trajkovski.

In the 66th minute, Trajkovski hit the post for the second time.  His free kick had the keeper beat, but the right goal post stood in the way.  It was rather unlucky for Trajkovski who deserved at least one of his free kicks to find the back of the net.  Trajkovski then took another free kick in the 69th minute (from further away so he went for power), but the Slovak keeper was up to the task and punched his effort out for a corner kick.

The remainder of the game saw Slovakia defend well and not allow Macedonia to get back into the game.  As a matter of fact, Slovakia nearly made the score 3:0 in the 80th minute, but Filip Kiss slotted his shot just past the right goal post.

After today’s results (which saw Slovakia, Spain and Ukraine all win), those three countries are in complete control of Group C.  Macedonia sits a distant 4th on the standings as their chances of a 3rd place finish look very slim.