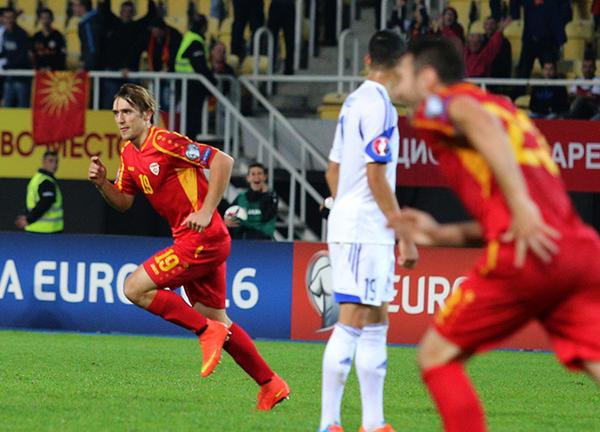 A stunning strike by Besart Abdurahimi in stoppage time of the 90th minute propelled Macedonia to a 3:2 victory over Luxembourg.

Manager Boshko Gjurovski fielded a 4-2-3-1 formation in today’s game as he opted to start Jovan Kostovski at CF and Muhamed Demiri next to debutant Arijan Ademi in defensive midfield.  Macedonia opened on a bright note and controlled things early, creating several good chances in the process.  Aleksandar Trajkovski nearly scored a goal in the 10th minute, but his shot went inches wide of the left goal post.

The breakthrough did eventually come in the 20th minute when Trajkovski intercepted a pass, then showed good dribbling skills before slotting a right footed shot to the back of the net.  Macedonia seemed fully in control at that time and it looked like the team was headed for a comfortable three points.  However, in the 26th minute, Muhamed Demiri and Daniel Mojsov were involved in an ugly collision.  Demiri was bleeding heavily, while Mojsov was complaining of pain in the mouth/jaw.  Both players left the field to receive treatment as Macedonia played with 9 men for several minutes.

When Demiri and Mojsov did return, both players appeared to be struggling and that’s when Luxembourg pounced.  Macedonia looked out of sorts and totally disorganized, leading to two goals by Luxembourg in the 38th and 44th minute.  The first goal came on a well struck free kick, while the second came on an effort from inside the area.  The last 15 minutes of the 1st half were an absolute nightmare for Macedonia as the halftime whistle could not come soon enough.

At the start of the 2nd half, Gjurovski brought on Ezgjan Alioski and Besart Abdurahimi for Ardian Cuculi and Agim Ibraimi.  Ibraimi didn’t appear injured, so we are not sure what led to the substitution.  But, that move proved to be the difference as Abdurahimi would go on to be the hero.

Macedonia went back to dominating the match in the opening 20 minutes of the 2nd half, but their finishing on several quality chances were squandered.  Then, in the 66th minute, Abdurahimi was fouled inside the area, leading the referee to point to the spot.  Striker Adis Jahovikj, who had come on six minutes earlier, calmly converted the penalty to tie the game at 2:2.

Jahovikj had a good chance to score another goal in the 83rd minute, but he skied his effort from close range.  Just as things appeared headed for a draw, Abdurahimi displayed individual class by collecting the ball and then slotting a perfectly placed shot to the top right corner.  Abdurahimi, who has been in good form for Lokeren over the past month, carried that over to the national team as well.

Macedonia collected an important three points in what was a must win game against Luxembourg, but the performance and concentration must improve.  The squad will now shift its attention to Sunday’s difficult test away to Ukraine.

UPDATE: Agim Ibraimi was taken out due to an injury and he has already been ruled out for the Ukraine match.  He will return to Slovenia to begin rehabbing his injury.  Also, Mojsov and Demiri received stitches after the game.  Mojsov is questionable for the Ukraine game, while Demiri will be out due a possible concussion.

Radio show „Stadium“ talks about Macedonian stadiums, Gjore Jovanovski is one of the guests:

Goran Pandev came storming in with a lot of emotion once he was introduced off the bench in the 57th minute of the Genoa - Lazio game.

Goran played well and won a late penalty when he caused a Lazio hand ball. Genoa gave Lazio a good game, but they fell just short in a 2:3 loss.

Silekss' last 9 results in the MFL:

Unbeaten in their last 9 & find themselves in 3rd place. Under the radar.